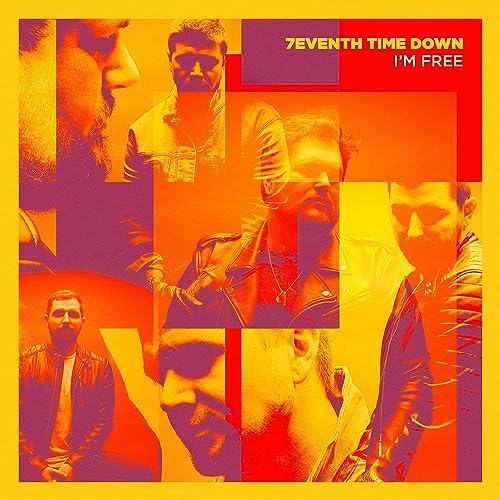 What does it tell you about a song, or an album or an EP, when you can ‘quote’ an entire review of another song, mentally substitute out the name from the previous song to the current song/s you’re writing about, and it’ll still make sense? 7eventh Time Down’s latest EP I’m Free recently released today… and it’s a worrying sign when everything I’ve mentioned in my review for “I Have Decided” as quoted above, especially rings true here.

Take the group’s lead single from the EP- “Questions”. The melody, on the surface, showed much promise. I mean, here was a supposed compelling, powerful and hopeful melody that was asking the tough questions, reminding us all that it’s ok to have doubts, to have questions, and to wrestle with God. However what is good in theory isn’t always executed well; and that’s certainly the case here. For those who haven’t figured it out by now, I’ve quoted verbatim my review of “I Have Decided” from back in 2018- and it’s just to let you know, that my thoughts on the band haven’t changed in 2 years. Sub “I Have Decided” with “Questions” (and any of the other songs on I’m Free EP) and that’s how I feel right now. It’s frustrating, as I know these guys are crazily talented. “Just Say Jesus”, “God Is On The Move” and “Promises” are especially proof of this. Yet “Questions” is lacking because it ties everything up in once nice bow. And that’s not indicative of how life is at the moment. Sometimes it takes a lifetime to sort through doubts and feelings of uncertainty- and to trivialise them and put them into a 3 minute song- and then declare ‘hey, it’s ok that you have questions’ and then expect everyone having doubts to suddenly not have doubts anymore, and to suddenly be ok; well that’s a bit ignorant don’t you reckon? But hey, what do I know- I’m just a reviewer!

For the rest of the album… need I say more? It’s pretty standard and run of the mill, and probably only needs to be listened to once. The title track is a typical radio CCM style melody, as lead singer Mikey Howard passionately reiterates that he’s been made free by Jesus, yet the delivery and execution falls flat immensely; while the equally uninteresting “Bow Down” is filled with repetition galore, even if the idea and novelty of the song sounds alright in theory- a song denouncing the old sinful ways of your life and declaring that you’re not going to bow down to idols. “All This Time”, a pleasant, nice, piano and synth ballad that essentially declares that God has never left our side even after all this time, is exactly that- nice without being confrontational and rocking the boat; while “Right Here” musically feels out of place, as this dance/EDM tune reaffirms the heartfelt promises of God that He’s right beside us every step of the way. Does it bode well for this EP though, that I believe that “Right Here” is the band at their ‘best’ in comparison to the other songs?

I used to be excited about 7eventh Time Down’s releases. But I’ve reached the point of no return. Sad to say, if these guys continue to make music as uninteresting as this, then chances are I won’t be listening to their future material… unless there’s a drastic ‘wow’ factor next time. As it stands, this is a bittersweet review- and when I want to be uplifted by something from 7eventh Time Down, I’ll just listen to “Just Say Jesus”, “Promises” and “God Is On The Move”! But… you guys might be needing this album if you are struggling with your faith, or even if your faith is intact. So listen to the EP. But if you have doubts still and are deconstructing… then I’d say check out Jason Gray’s Order Disorder Reorder album, and read my brother’s review of that album too!

3 songs to listen to: All The Time, Questions, Right Here