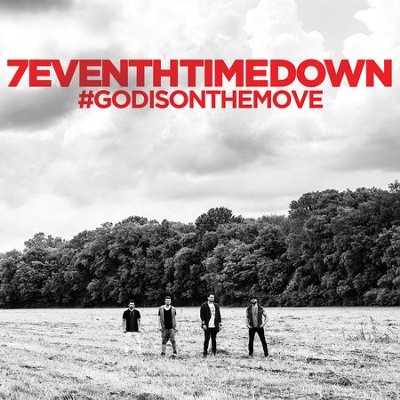 7eventh Time Down– God Is On The Move (Amazon mp3/iTunes)

“…All across the world we are seeing that God is still good. He still keeps His promises, God is faithful, He is redeeming all of us through Jesus. We believe revival is just around the corner! We believe God is in fact on the move…” Releasing their third album God Is On The Move next week via BEC Recordings, 7eventh Time Down, the pop/rock quartet from Kentucky, with musical similarities to Building 429, Kutless and Seventh Day Slumber, have delivered 11 songs of rick lyrical poignancy and emotion, while also tackling broader issues prevalent to society today. These guys wear their heart on their sleeve, and after being completely overcome and challenged by their sophomore album Just Say Jesus in 2013, friends Mikey, Eric, Cliff and Austin pick up right where they left off, which is definitely a good thing! With the theme of the entire album being a reminder that God is working in our lives all the time even when we can’t see the immediate effects, the BEC Recordings album, which drops next week alongside albums from Rend Collective, John Waller and Soulfire Revolution, is a must listen for any listener who loves pop/rock music, or even worship music as well. Though some melodies and lyrics here are slightly cliché, there’s no denying the band’s heart for Jesus, as we immerse ourselves and delve deep into 40 minutes of guitar led pop/rock goodness. Making their home at BEC Recordings, this album is slightly more subdued musically than the previous album, yet nevertheless packs a punch, with my personal highlights being almost half the songs on the album, including the title track and the album closer!

Leaning more towards CCM and pop on this album, rather than rock in Just Say Jesus, the rest of God Is On The Move, 7eventh Time Down continue to shine in the rest of the album, as they provide us with personal worship moments as well as intense rocking out moments! “Hopes And Dreams” is more rocky than its predecessor, with the guitar led 3 minute melody of encouragement reminding us to live out our life in the knowledge that God has a plan for us, in the knowledge that everything we do is moving us towards what God has in store for us He has hopes and dreams for us, and it’s up to us to step into that and walk where God is calling us- and it is the chorus that puts thee theme into words, as Mikey eloquently outlines that ‘…I have seen the light, I have come alive, I tell you I believe in the God of hopes and dreams, never felt this before, tomorrow is an open door, He’s got big plans for me, the God of hopes and dreams…’, an assertion that we all can claim, as we can indeed live life to the fullest knowing that God’s got it!

“I Still Believe”, led by acoustic guitar, takes the theme of stepping into God’s plans, one step further, with the folk worship melody audaciously asserting that Jesus is King and Lord of Lords. As Mikey passionately reminds us that being a Christian means actively proclaiming and testifying to the things Jesus has done for us, we are challenged to be more active in our faith, so that we can one day truthfully declare that ‘…when the world falls down around me, I’ll stand and testify to a love I can’t explain or deny…’. “Lean On” and “Always” are next, and are piano led ballads, something that musically wasn’t explored on previous albums, but something that has sure worked here! “Lean On” is a motivational song sung from one friend to another, and it’s basically a reworking of the hymn “Leaning On The Everlasting Arms”, with the theme being that we can lean on Jesus during times of trouble and hardship, that ‘…He will hold you up and never let go…’. While “Always” (nope, not a cover by Kristian Stanfill!) is sung from God’s perspective as well as our own, and is simple the parable of the lost son put to song. As Mikey ardently reminds us that God is always with us, and that He loves us no matter our screw-ups, we are given comfort in the knowledge that we are God’s children without even doing anything. What a mind boggling notion!

Musically there’s something for everyone on this album, and despite the many, many times the lyrics and themes seem to be borrowed and inspired from elsewhere (hands up, who thinks many themes here have been covered before?), it is the heart and passion of these guys that increase my enjoyability of this album! The guitar led “Unbelievable”, the midpoint of the album, carries on from “Always”, and relays that God’s love is unbelievable in the sense that it always forgives and accept us even when we’re in the lowest of the low. God is faithful and it’s great to be reminded about this fact.

“Pray It Down” enters into rock territory once again, like “Hopes And Dreams”, but more aggressive, and is where Mikey passionately cries out, asking God to send revival to our land. This whole word needs a spiritual and cultural makeover, and 7eventh Time Down get back to basics here, asking God to intervene and change the culture so that His name is renown by everyone on the planet. A few songs later, the folksy, bluesy “Revival”, expands upon the theme of “Pray It Down”, as Mikey reminisces about his children, longing for the church and the world to be like it was a few decades ago. As Mikey sings out ‘…long live the love that conquered the grave, take me back to those days of revival…’, we are once again encouraged to live for Christ in this day and age more than ever, as we ask God for revival to happen now so that many other non-believers know that He is alive and real! With the CCM-like acoustic guitar led radio friendly ballad “Beautiful Life” praises God for the life we’re living, because we are breathing and God is in it; it is “Kingdoms” and “Promises” that to me are the pinnacle of the album musically and lyrically.

One of the musical and lyrical highpoints, “Kingdoms” poses quite a lot of questions, with Mikey and the band asking about whether we are lifting up God’s kingdom or promoting our own. Similar in theme of Casting Crowns’ “American Dream”, this thought-provoking melody from 7eventh Time Down is sure to promote discussion, as Mikey poses a ‘what-if’ scenario, and sings out ‘…if we could break down these walls in between us, reach out to love like we mean it, lay down these weapons guarding our hearts, and let our kingdoms fall…’. “Promises” ends the album on a hopeful and reflective note, with the first single from the album relaying that ‘…all I need is You, You’re the hope in this life that I can’t deny, all I need is You, I’ve seen it again and again, I can stand on Your promises…’. Admitting our need for God, and our innate need for meaning and purpose in this life, this melody is the perfect way to end an album that has indeed grown on me since the first listen.

7eventh Time Down have crafted an album loaded with worshipful moments, as well as thoughtful melodies about the human condition and our place in this world as a Christian. Though the album is short in duration, and it’s over before you know it, the 11 tracks hold a special place in my heart as some of the most emotional and revealing songs of the year. Though it’s lyrically simple, here it works to the band’s advantage. Arguably one of my favourite artists on BEC Recordings currently (alongside Kutless, Shine Bright, All Things New, David Dunn and Shuree), these men from Kentucky deliver enough in this album to warrant at least a listen. Comparisons to RED, Seventh Day Slumber and Skillet are definitely evident here, as Mikey does a stellar job at leading vocals and songwriting. Released in a month that is killer in terms of fantastic albums releases (from artists like Soulfire Revolution, Rend Collective, TobyMac and Nichole Nordeman); fans of these aforementioned bands above will certainly enjoy God Is On The Move. Well done guys for such an entertaining and lyrically profound album!

One thought on “7eventh Time Down – God Is On The Move”