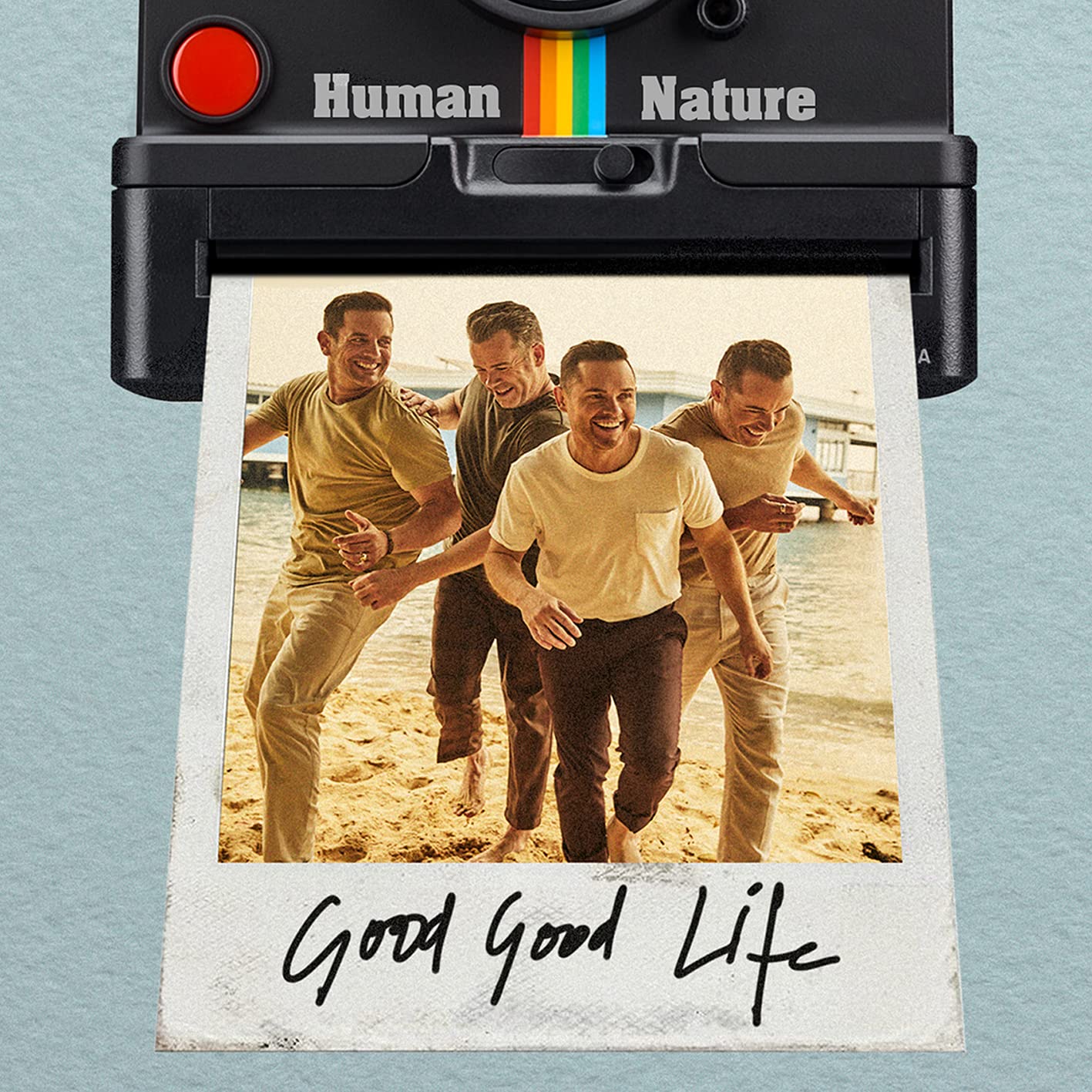 Human Nature have had quite a music career thus far. An Australian group that formed in 1989 (and are still performing with the same original lineup to this day), Human Nature has been delivering songs of encouragement, hope and poppy goodness for more than 25 years, inclusive of songs like ‘Wishes’, ‘Every Time You Cry’, ‘Don’t Cry’, ‘Don’t Say Goodbye’, ‘Last To Know’ and ‘Always Be With You’, to name a few. While for me I always felt that Human Nature didn’t be as impactful and famous internationally as they could’ve been (because of the presence of boy bands like Backstreet Boys, *NSYNC, New Kids on the Block, All-4-One, Westlife, Take That and Boyz II Men that were all impactful and famous around the timing of Human Nature), the band nevertheless had a good following in Australia, and even if I am still not as across their songs as I probably would’ve liked, I can still appreciate good music when I hear it, and Human Nature and their songs are some of Australia’s most underrated. Still delivering music in 2021, Human Nature have set the bar pretty high with regards to male vocal groups in Australia. They’ve become a household name, and their songs have gained traction and intrigue wherever possible. But this isn’t really a ‘history’ lesson on the band, if you will- there’s Wikipedia for that. And while the band unfortunately didn’t make the cut on the arbitrary list of 100 Most Influential Artists of Modern Music History, they did come agonisingly close, and will make a special ‘Honourary Mentions’ list, which will be written about and posted after the series is completed. Nevertheless, this Aussie quartet (who according to Wikipedia, specialise in doo-wop harmony pop) have come back with a new EP, their first since the double-disc best-of compilation that released in 2019 (that best-of album release coincided with the band being unveiled in the ARIA Hall of Fame). Good, Good Life released in June 2021, and with 5 tracks (inclusive of a Guy Sebastian collaboration) and 4 other acoustic/live recordings (amounting to 9 tracks overall); these four men have crafted something enjoyable and feel-good, something to tie us over to a possible full-length album release, whenever that may be.

The first single from the EP/short album released in February 2020; ‘Nobody Just Like You’ is a light, breezy acoustic pop melody with light harmonies, as the band allow their voices to tell a story of how much a persona is in love with a certain someone, and realises and understands that there is no one that can take this place of this person in their life, that ‘…I spent my life trying to find, somebody just like you, someone to waste all of my time with, somebody just like you…but there’s nobody just like you…’ Standing at 2:46, this radio-friendly song is something of a compelling melody that allows introspection, and reminds us that we all need to find someone else who we can know, is our somebody, the one that we know we can’t compare anyone else to- and then realise if we have a shot at even having this person in our life, period. While some dreams, aspirations, relationships, and the like are one that are gettable, others are often wishful thinking, and maybe this song can hopefully allow us to delineate between the two.

‘Good, Good Life’, the title track, can also be sent to radio at a later date, as this percussive track is as joyful as it is heartfelt. A song that could be seen as the band’s attempt to deliver a song that can be easily taken into the CCM market, we’ve known recently of the faith of Andrew Tierney since he and another friend of his, Timothy Dunfield, formed a side-project to Human Nature, a band called Finding Faith back in 2018. The release of their self-titled album that year (and with songs that came out of it like ‘Good Hands’ and a cover of ‘Cornerstone’), showed us a side of Andrew Tierney that maybe people who have been longtime fans of Human Nature, may never have known. And maybe that’s the point- in this world where it can seem fashionable to change your beliefs with the trends, people who maybe once were quiet, are now speaking up boldly about their unashamed faith in Christ- and maybe the release of Finding Faith the album in 2018, has led the band Human Nature to record songs that can appeal to CCM as well? Whatever the case, ‘Good, Good Life’ the title track is one that reminds me of the person who embodies this notion of a good, good life- Jesus Christ. Sure, following Christ and declaring oneself to be a Christian is certain to bring upon us hard times, but that doesn’t mean that a life with Christ isn’t any less ‘good’ than one without it. On the contrary. As I’m reminded in the impactful lyrics, we can rest assured that ‘…You saved me from hopeless, You gave me oceans when my world was dry, made me into a believer, woke me out of a dream and opened up my eyes, I’ve been living for moments that I thought that I wanted, but if I’m being honest, it’s a wasted high, sick of chasing a fortune that I can’t hold on to, I was broke ‘til I met you, You’re the paradise, You’re the good, good life…’ ‘Don’t Lose Heart’ follows on from ‘Good, Good Life’, and is a song that is as comforting as it is heartfelt and emotive. Sung from the perspective of someone to their friend, longing for them not to lose heart in the difficult and hard times, we are called to steady the course and press on through the difficulties- the piano led ballad is a timely reflective moment that reminds me of the Bible Verse of 2 Corinthians 4:16 – 18:
So we do not lose heart. Though our outer self is wasting away, our inner self is being renewed day by day. For this light momentary affliction is preparing for us an eternal weight of glory beyond all comparison, as we look not to the things that are seen but to the things that are unseen. For the things that are seen are transient, but the things that are unseen are eternal.
The band also deliver the joyous pop melody ‘Planets’, a song about everything coming into place (like it’s almost the planets aligning) when we meet the right person for us, and we have that connection that can only be described as something out of this physical world. ‘Planets’ reminds us all that these things that we often understand on a surface level- happily ever afters; aren’t just in the books, but in real life too- often what it takes is for a little ‘planet’ aligning (or even what causes planets to align- God Himself!) for us to meet the person God has for us.

The album then rounds out with ‘Broken Humans’, a collaboration with Guy Sebastian, and the official second single from the EP. The song itself speaks about the fragility of life, and the complexities of humans in general. We are all flawed and broken, we are all messed up, and don’t have things figured out, most of the time. A vulnerable song like this, can help us all admit our brokenness to each other, knowing full well that everyone else probably feels as we do- in need of saving, but being at peace in knowing that we aren’t the only ones feeling like this, in a sea of people that on the surface, we may not relate to. Revealing out vulnerabilities can feel daunting and unsettling initially, but ‘Broken Humans’ is such where our admission of being broken is a form of strength- we don’t have to hide behind a mask, trying to please ____ and ______, but to know that in our brokenness, Christ comes alongside us and gives us the strength to carry on towards plans, goals and dreams He has set aside to accomplish. As the album presents to us 5 songs, alongiside 4 others (a live acoustic version of ‘Good, Good Life’, an original piano demo of ‘Don’t Lose Heart’, the acoustic ‘Nobody Just Like You’, and ‘Broken Humans’ without Guy), Good, Good Life is a great way to be introduced back into Human Nature, a band that has become a household name in Australia, as it should be a household name, anywhere else. While the band didn’t pick up in America and anywhere else, as I believe they should’ve been, Good Good Life nevertheless is a 9-track album that is the perfect remedy for what 2021 has become- a mirror of what 2020 was. Especially in Australia, where more than half of the country is locked-down because of the Delta Variant of COVID-19- Human Nature’s latest can be a comfort to us all in such a time as this. A great welcome-back to a band that in some ways, is underrated right now in an industry that seems to move on from artists to the next best thing as quick as someone changing sport-team allegiances; Human Nature have given to us a collection of songs that are as earnest as they are compelling, an EP that could do well on CCM radio if the decision to go that way was implemented. Well done Human Nature for these songs, can’t wait for a new full-length album, whenever that may occur.