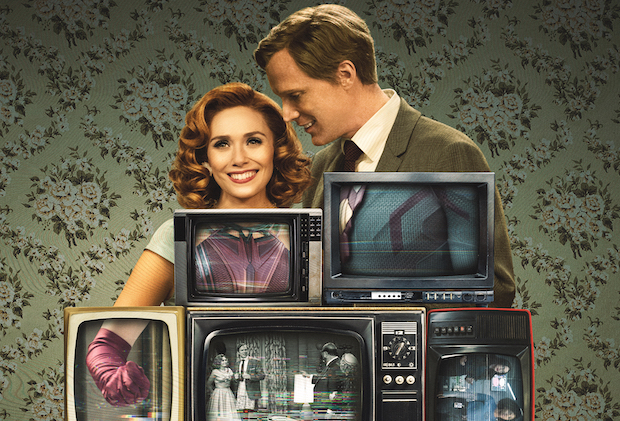 ‘We are an unusual couple’

‘We just don’t know what to expect’

‘Is this really happening?’

‘I assure you I’m married, to a man, a human one and tall’

‘Wanda, who is doing this to you?’

‘Have you come to save us?’

If you’re a fan of Marvel Comics, then you would have heard of these quotes before. Even if you’re not a fan of comics or the Marvel Cinematic universe- then chances are that you still would have heard these quotes. Disney +’s new TV series WandaVision has been highly anticipated for a long time now- this comedy/drama brainchild of Kevin Feige and Jac Schaeffer has been in the works for a while- with the theme music being composed by Kristen Anderson-Lopez and Robert Lopez (writers of songs for the films Frozen and Frozen 2!). With Elizabeth Olsen and Paul Bettany excelling in my own opinion at the comedy genre- this show is a one of a kind!

I’ve been a fan of the Marvel Cinematic Universe since 2008 when Iron Man released. Since then me and my family would always steadily watch the movies when they released in the cinemas. Ever since our café at the store though, we haven’t been regularly to the cinemas- thus films like The Avengers: Age Of Ultron (2015), Antman (2015) and Captain America: Civil War (2016) were seen on DVD. Yet after this time, we sort of fell away from Marvel as we tried to keep up with the Arrowverse… and so once Disney + announced new Marvel Cinematic Universe series for WandaVision, Hawkeye, She-Hulk, Loki and Falcon And The Winter Soldier, amongst others; we decided to binge the rest of the films we hadn’t seen in December last year. Would you call us Marvel Cinematic Universe fanatics? On some level, I guess we are, as binging 10 films within a month is a bit much… but out of everyone else in the world, I’d say we’re pretty tame and not that intense.

Let me say from the outset that if you don’t watch anything from the Marvel Cinematic Universe, then this show isn’t the one for you to enjoy. Kevin Feige has said that these episodes are stand-alone, and that “…Marvel’s upcoming films should be viewer-friendly for all levels of fandom, regardless of whether you’ve seen the studio’s assorted Disney+ series. [The challenge is making them work for both types of viewers — viewers who follow everything we do, and the much more casual viewers who just heard something good about it and want to check it out,” he says. “And that’s what we’ll continue to do.] …”; but I for one believe that watching these 23 MCU films (in order) will benefit you greatly when jumping into WandaVision. When you immediately see Wanda and Vision in this black and white 50’s/60’s inspired world, with no idea of who they are- and all of a sudden they do magic tricks and make jokes about Vision’s external body structure and the fact that he doesn’t eat; well then I guess anyone will be confused. If though you are up to date with everything MCU… and if you are one of those people that lives and breathes the MCU, then WandaVision won’t disappoint at all. Sure, the rollout on Disney + of week to week episodes will frustrate, but isn’t that how series used to be like- episodes week to week?

There are plenty of reviews online for WandaVision episodes 1 and 2- the most in depth being TVLine’s thorough and detailed recap and their spoiler-free review of the show. For me as I was reading these ‘reviews’ (as I mostly always do before watching shows in general- it’s what I do and though I am spoiled, it doesn’t hamper with my enjoyment!), I found that couldn’t add to these skilful and professional articles- particularly as I found myself enjoying this show, and agreeing with everything written down in these articles. Though I myself aren’t that much of a fan of comedies… WandaVision draws me in instantly, as I am intrigued about these characters, and I am heavily invested in the character’s journeys, wherever they may end up. While I am curious to see how Kat Dennings (Darcy Lewis), Randall Park (Jimmy Woo), and Teyonah Parris (Monica Rambeau) fit into this universe of Wanda and Vision; ultimately the stage belongs to Elizabeth Olsen and Paul Bettany- without them the show flops, and with them, this may be the best show of 2021. Now is this show great in and of itself to watch week to week, or should you all exercise restraint and then watch all 9 episodes in a binge? Well… how about both? Just make sure you’re up to date with the MCU first! Well done Kevin, Elizabeth, Paul and everyone involved! WandaVision is thoroughly enjoyable and I can’t wait to see how the rest of the episodes unfold!

Did the first two episodes of WandaVision leave a lasting impression on you? Did any themes in the episodes speak to you, and which was it? What elements of the show are you enjoying- Wanda and Vision’s seemingly smooth transition of suburban life, Wanda’s unexpected pregnancy, the mystery of the ‘bee man’, or the presence of colour in a black and white world? Will you be tuning in for the rest of the season knowing that it’s only meant to be one season, yet also tying into Doctor Strange and the Multiverse of Madness and the upcoming new Spiderman movie? Let us know in the comments.

WandaVision debuted 2 episodes on January 15th on Disney +, and will release 1 episode per week until March 5th 2021.