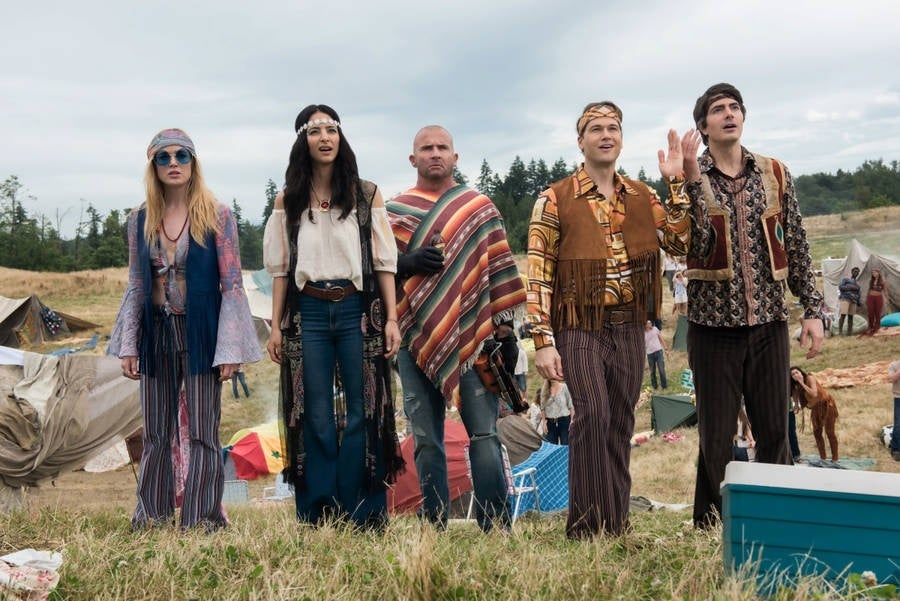 When you’ve helped the world defeat a time demon, surely- you’re due for a rest, right? I mean, you’ve run around history trying to fix time periods and ensure that anachronisms don’t become bigger, all the while trying to locate all of the 6 totems to defeat Rip Hunter’s nemesis, so after all of that is all said and done, you must be exhausted, right? Aruba here we come, right? A relaxing holiday with nothing to do but sunbake and chill for the foreseeable future? Not quite.

If you want to read my recap of Legends Of Tomorrow Season 1-3, then go right ahead, but for those of you who are well up to date, well… I mean you know all the spoilers…so I can safely say that the last time we saw the legends, they were relaxing at the beach. That is until John Constantine showed up with an oversized dead dragon’s head, wanting to know who let Mallus out of his prison, and letting the whole team know that there are more creatures that need to be captured and be brought back down to hell. Fast forward 5 months later and we have the team doing routine checks in the timeline for anachronisms. The team that is Sara, Ray, Nate, Mick and Zari (as Wally has gone off meditating in Asia again- the actor Keiynan Lonsdale is seeking more opportunities in Hollywood!) have been cleaning up anachronisms for the past while, and it seems like all of them are bored.

But as soon as each voices their longing for participating in something exciting, Ava calls the group and wants them to come to Washington DC for an important meeting. Turns out that it’s just a party for solving the last anachronism, yet it is after the party that things start evolving for the rest of the season. Sara drops by Ava’s house and tells her that she is keen to take their relationship to the next level and move in with her, however Constantine drops in unannounced (without Ava’s knowledge!) and drops some bones off to Sara- bones that are supposed to shake when there are monsters about in the timeline- and boy are they shaking! So Sara, who can’t really shake the feeling that something is wrong, and because she is the captain of the ship, goes off with Gary to see whether there are monsters in the timeline (all while Ava is asleep!), with the help of Gideon on the Waverider. Hence the start of our heroes’ journey in Woodstock 1969.

The rest of the team converge in 1969 in one way or another. Mick is bored with trying to always be on the straight and narrow, as per usual, thus resorts to stealing cars after the Time Bureau party, as Nate, trying to mend his broken heart after Amaya left him to go back to 1942, joins him and suggests a house to rob from. We later find out that it’s his parents house, as Nate has a strained relationship with his father Hank. At the dinner table Nate with mum and dad as well as Mick, have a heated argument, and it is through this discussion that Nate realises that history has changed in 1969. He and Mick travel back there. While Ray and Zari end up in 1969 via a very different way, Ray is trying to track down Nora Darhk and thinks she’s in 1969. The duo take a jump ship and meet up with everyone else…and that’s where things start getting a bit crazy.

I won’t spoil the episode for you (because I know that you all will find many things that happen in the episode that make you laugh out loud- this episode of Legends Of Tomorrow truly is one of the best season premiere episodes I’ve seen in a while, from I reckon the strongest Arrowverse show at the moment!), but I will say that the legends see a killer unicorn (in every sense of the word!), become high from a left-field hallucinogenic substance, and save the day through very unusual methods, involving Gary and the very fact that he is a virgin. It’s a zany, wacky way to start a season premiere, and an episode in which I am now very intrigued at what happens in the rest of the series. With each of the actors stepping up and shining in their comedic roles as well as their heartfelt, emotional scenes (especially Tala Ashe, Nick Zano and Caity Lotz in this episode); I reckon there is plenty to look forward to here in the upcoming season. Constantine may have a nemesis (one that is unseen, obviously!), while Zari may want to tamper with time again- this time not trying to save her brother, but instead ensure that her family has a better future long before her brother is born. Ray is still trying to contact Nora in the hopes that she is out there trying to be a better person, while Nate’s broken relationship with his dad is on the way to being mended by the end of the episode. Sara’s insecurities as a lovable person are certain to be explored as well as she wrestles with the idea of Ava, who is a clone, ever loving her completely; and though I am not sure what Mick will deal with this season, perhaps his story arc is coming soon. But then again it’s Mick, and maybe his story arc is drinking beer and eating… Given that the star studded show isn’t a part of the annual Arrowverse crossover this year; this fact makes me intrigued for the rest of the season- and I’m sure after you watch “The Virgin Gary”, then you will be anticipating each episode too!

Did “The Virgin Gary”, the season 4 premiere of Legends Of Tomorrow, resonate with you? Did any themes in the episodes speak to you, and which was it? What elements of the show are you enjoying- Constantine insistence of not joining Team Legends, Ray’s blatant crush on Nora, Nate’s rebuilding of his relationship with his dad, or Sara being finally happy for once? Who do you think will try to wipe out the team? Rip, Snart or someone else? Will you be tuning in for the rest of Season 4? Let us know in the comments.

Legends Of Tomorrow season 4 airs every Monday at 9/8c on CW, so check it out and enjoy!