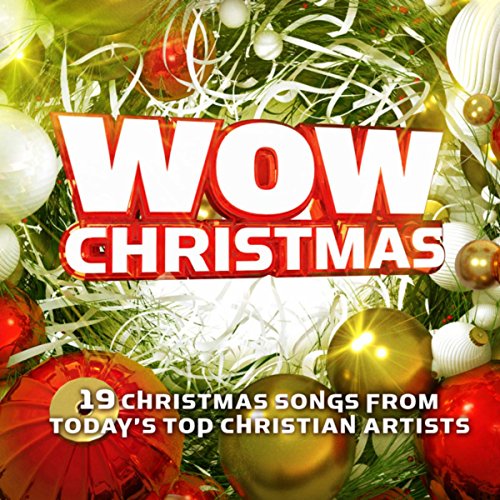 Another year, another WOW Hits album? Absolutely. Another few years, another WOW Christmas album? You betcha! In fact, aside from the annual WOW Hits albums that have been in circulation for quite some time, WOW Christmas (and WOW Worship for that matter) are some of the other frequent releases to be under the WOW banner. Enter in WOW Christmas 2017- a single disc collection of 19 songs featuring familiar carol favourites, as well as some original songs, to create a quasi-up-to-date release to be played on repeat during Christmastime. And so we are met with WOW Christmas 2017, a single disc version of what was normally a WOW Christmas (the WOW Christmas brand would normally release a double disc volume, once every few years, the last double disc WOW Christmas was WOW Christmas Blue in 2013). So what do I make of this year’s Christmas compilation? Am I going to gripe about this compilation as I did about WOW Hits 2018? Maybe. Maybe not. But what I will say is this- we haven’t really had a Christmas compilation in a while (5 years I think) so it was great to see WOW release a newest edition to WOW Christmas. The fact they are doing a single disc version could mean they are maybe releasing more WOW Christmas offerings more frequently, or maybe this is just a one off. Whatever the case, these 19 tracks have some up to date as well as some dated tracks, some years and years old. Some other songs are just bypassed and some artists and labels are shunned altogether. So in all essence, WOW Christmas still has a mishaps of WOW Hits, yet I’m sure in the future, the WOW brand can create more of a balanced representation of what the years have to offer in Christmas music, both in originally written songs and in Christmas carols!

Looking at the list, we can see some great inclusions. Matt Redman’s recent hit ‘His Name Shall Be’ is pleasantly added onto the track list, and it is great to see Matt back in WOW, even if it is WOW Christmas- his last song offering onto any WOW release was ‘Mercy’ back in WOW Hits 2015. The song speaks about all the qualities of Jesus and His name and what it means at this time of the year, and was a shoe-in on this WOW offering. Same with the new recordings- ‘Somewhere In Your Silent Night’ (Casting Crowns), ‘The Call of Christmas’ (Zach Williams) and ‘O Holy Night’ (Tenth Avenue North). The former is a hopeful prayer, reminding us all that we are the very reason Christ came to this earth, that ‘…somewhere in your silent night, heaven hears the song your broken heart has cried…’, while Zach Williams’ country-tinged Christmas tune invites us into the call of Christmas and what the season has to offer- a time for those who are less fortunate than us to be reminded of the unconditional love and acceptance that Jesus can offer them at this time. ‘O Holy Night’ is as much welcomed as it is uniquely recorded- being one of my favourite Christmas carols, ever, it is nice to see Tenth Avenue North, one of my favourite bands at the moment, cover the track in true 1940s fashion, with the addition of mainstream artist Jon McLaughlin featured singing the second verse. Though I reckon no version of the song can compare to the renditions given by Kerrie Roberts and Kari Jobe, Tenth Avenue North comes very close. Maybe I’m just biased because I love the song so much. Nevertheless, we are blessed with these new recordings by Casting Crowns, Zach Williams and Tenth Avenue North respectively, as each these three songs bolster the calibre of WOW Christmas 2017 quite a bit!

Throughout the rest of the album, we see songs that are as timely as these new recordings, and others that aren’t necessarily so. Matt Maher’s ‘Glory (Let There Be Peace)’ was a solid Christmas hit all throughout 2016, and therefore to be on this year’s compilation is a certainty, while TobyMac delivers ‘Bring on the Holidays’, a holiday-themed song that debuted last year in the form of a cartoon music video. ‘Unto Us’, the latest Christmas single from Matthew West, invites us all to declare alongside him that ‘…unto us, unto us, a child is born…a son is given, glory to God in the highest…’ (in a similar lyrical vein to Aaron Shust’s Christmas song of the same name), while ‘Glorious’, ‘When Hope Came Down’, ‘He Shall Reign Forevermore’ and ‘Merry Christmas Everyone’ are all timely in their inclusions, and are all powerful, emotive tracks from for KING AND COUNTRY, Kari Jobe, Chris Tomlin and Rend Collective respectively. But…with the good is always the bad.

As much as Natalie Grant’s song is as good as it is, ‘O Come All Ye Faithful’ is from her album released in 2005- that’s 12 years ago. Maybe Natalie shouldn’t have been included at all and another song be included which would be more of a current radio hit? Similar with Big Daddy Weave’s ‘Joy to the World’. I love the song in an of itself, but I since did some research, and ‘Christ is Come’, a chart-topping song released on their 2009 Christmas album was never on WOW Christmas Blue (2013) and WOW Christmas 2011- surely it was a shoe-in on WOW Christmas 2017 right? ‘Have Yourself a Merry Little Christmas’, frankly, is an overplayed song, and while it suits Lauren Daigle’s voice very well, Hannah Kerr’s version of the song was arranged much more uniquely…and besides, Lauren’s original song ‘Light of the World’ wasn’t present on any WOW Christmas compilation…surely this song should’ve been on WOW Christmas 2017 instead? And then there’s songs and artists that were bypassed altogether- ‘Christmas Card’ (Steven Curtis Chapman), ‘Baby King’ (Jason Gray), ‘Labor of Love’ (Point of Grace), ‘Hallelujah [Light Has Come]’ (BarlowGirl), ‘Shout for Joy’ (Lincoln Brewster), ‘Christmastime’ (Phil Wickham), ‘Jingle all the Way’ (Dan Bremnes), ‘This Christmas’ (7eventh Time Down), ‘Asleep in the Hay’ (Jonny Diaz), ‘Noel’ (Y&F), ‘Love is Here’ (Laura Story)… you get the picture.

WOW by no means is a perfect brand, and neither is WOW Christmas 2017. Here’s hoping that this single disc version means that WOW Christmas is to be produced more often, with more timely tracks being added on compilations that we can enjoy every time the December holiday season comes around. And despite all my griping, WOW Christmas 2017 still is a good collection of songs. Maybe, just maybe, there’s a WOW Christmas 2018. If not, let us all enjoy WOW Christmas 2017 for what it is…and anticipate WOW Hits 2019 releasing next year. And besides, it has been a while since the last WOW Worship album. Maybe another WOW Worship next year?

3 songs to listen to: His Name Shall Be, Unto Us, Somewhere in Your Silent Night