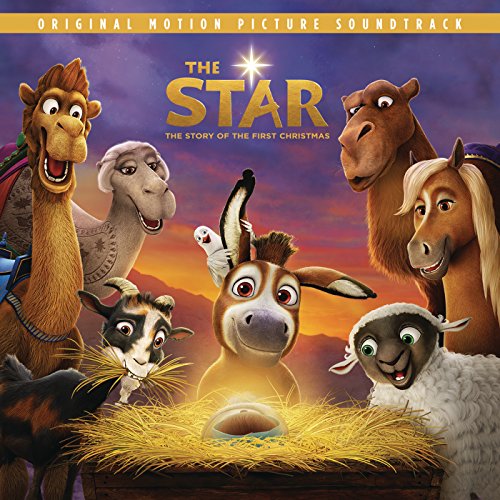 Throughout the years, there have been plenty of Christmas movies releasing around the months of October, November and December. In addition to made for TV Hallmark movies, some theatrical Christmas movies that have impacted me as a person, and have been thoroughly enjoyable over the past while, include The Santa Clause, The Santa Clause 2, The Santa Clause 3, Fred Claus, Four Christmases, The Family Stone, The Holiday, Elf, Love Actually, Home Alone, Home Alone 2, and Jingle All The Way, to name a few. But something missing from these films is that the Christmas story, the reason why we celebrate Christmas in the first place- the story of Jesus being born in a manger for mankind, isn’t explored at all, or if at all not deep enough.

Well, this year, a film recently released that is ground-breaking and making history in the respect that is speaks directly about Jesus birth- The Star is told from the perspective of the animals, during the 9 months of Mary’s pregnancy before she gave birth to Jesus in the manger in Bethlehem. Because we as Christians do not really know what happened within the time Mary was pregnant, what she was feeling, the conversations she had with Joseph, and what occurred before Jesus was born (I think there were only a few verses in Matthew and Luke which glossed over the period of time before Jesus’ birth and after Gabriel came to Mary and told her the news!); The Star almost certainly isn’t what occurred in the Bible. You could say that it’s 99% ‘fiction based on fact’. But it could’ve been, and it’s this notion of ‘oh, that’s one possibility of how Mary was feeling etc’, makes this film all the more poignant, enjoyable and inspiring. While I won’t delve into my thoughts on the film (as in all honesty, I haven’t seen the film at all!), I would still say that you should all watch The Star– it at least gives you something meaningful to talk about with family and loved ones this Christmas.

So, without further ado, let me instead speak about the motion picture soundtrack of The Star which released a couple of months ago. Containing 12 tracks, and comprising of some of the biggest names of mainstream, Christian and country music; The Star (Original Motion Picture Soundtrack) is a heartwarming and uplifting musical and spiritual experience. If you’re a believer, you will be blessed, and even if you’re not, you will be blessed also. Regardless if these artists are Christians or not, the value of their songs do not rise or fall- their impact is the same, as God can work through anything He wants to. Because of this fact, The Star soundtrack is just as compelling as The Chronicles of Narnia: The Lion, the Witch And The Wardrobe soundtrack, and deserves at least one listen from start to finish before the year’s end.

With a great mix of original Christmas melodies, traditional carols and a few obscure Christmas tunes, we are blessed to hear fresh takes on some songs we know and love, as well as new songs that are sure to become our favourites over time. The title track of the album, sung effortlessly and fervently by Mariah Carey, is a piano led hopeful and honest ballad, and is perfect as the opener, as Mariah prayerfully reiterates to us that we can and should ‘…follow that star above you, should the world try to break you down, there is One who waits for you, though you can’t see Him now, thunder and rain surrounds you, but His love’s just a breath away, if you follow your heart, follow the light…’, acknowledging that Jesus Christ is the shining light and the star in our lives, guiding us every step of the way even in the times where we feel lost, hopeless and alone. While Mariah has had her own fair share of controversies away from the spotlight over the years (with her most recent gaffe being the lip syncing debacle on the NYE special on ABC last year!), there’s no denying her voice is still as good as ever in the studio, and “The Star” is testament to this fact that God can still use someone whom the world currently sees as not relevant, and speak life through them. He’s done it before through Moses, Abraham, Daniel, David and many other heroes in the Bible, so why can’t He do that with  Mariah?’

The rest of the album carries on from where the album opener left off, proclaiming that Jesus Christ is the star we all should follow and rely on in every situation in our lives. “Children Go where I Send You” is a fun filled 2 minute pop melody, driven by stirring keys and guitar, as country/pop singer Kelsea Ballerini ardently recounts to us about how numbers in those days were Biblical, and that each number represented something in the Christian life, that ‘…I’m gonna send you eight by eight, Eight for the eight that stood at the gate, even to the seven that came down from heaven, six for the six that couldn’t get fixed, five for the gospel preacher, four for the four that stood at the door, three for the Hebrew children, two for Paul and Silas, one for the little bitty baby…’; while gospel singer Kirk Franklin completely overhauls “We Three Kings”, and adds his own spin to one of the most underrated carols ever, adding lyrics asking God to show him the way, pondering that ‘…I’m looking at the star right now, I wonder where You are right now…’.

“Life Is Good”, a musically bouncy and pop 3 minute original written by A Great Big World, is a misstep on this album however, as the track seems so out of place, and lyric wise seeming so superficial. As we are presented with the lyrics of life being good when we have ‘you’, we can only presume that the duo are speaking about Jesus; but the mishap is brief and the hits start to flow. Becoming an instant pop sensation after her duet with Clean Bandit on “Symphony”, Zara Larsson offers up another carol that many would overlook- “Mary Did You Know” is brilliantly covered here, and is one of my favourite tracks from this album, with Zara’s rendition being just as poignant and emotional as versions from Kutless and Anthem Lights.

While more underrated Christmas tracks such as “What Christmas Means To Me” and “Breath Of Heaven” (yep the same Breath Of Heaven written by Amy Grant!) follow, with the former a 3 minute pop/gospel tune led by up and coming teen pop sibling trio Saving Forever, and the latter a contemplative piano led melody led by country singer Jessie James Decker, near-flawlessly sung, as she eloquently asks God, ‘…breath of Heaven, hold me together, be forever near me, breath of Heaven, breath of Heaven, lighten my darkness, pour over me Your holiness for You are holy…’.My favourite carol of all time, “O Holy Night”, is featured on the soundtrack of The Star also, covered by Yolanda Adams, and sung quite beautifully, though nothing can compare to versions from Kari Jobe, Kerrie Roberts, Tenth Avenue North and Newsboys; Yolanda’s effort here is quite remarkable, as she gives us a gospel version, complete with free worship, and spontaneous praising with a choir and backing vocalists. While exclusive bonus track “Carol Of The Bells”, by Pentatonix, is a chilling, explosive and beautifully sung acapella rendition that is seriously out-of-this-world, and needs to be heard to be believed.

Official album ender “What Child Is This” is reserved in its musical nature, as the acoustic guitar led ballad has Jake Owen ardently relaying to us that Jesus is Christ our King, and that we can and should be giving praises to the One who is worthy of it, to the ‘…babe, the son of Mary…’. And I’m not really sure why the hymn “His Eye Is On The Sparrow” is present on this album, as it’s not a Christmas themed song, but Casting Crowns’ version is so, so good, and I’m glad that it was included in the end, as Mark Hall and co. alter the melody and add some extra verses and tweak the chorus in order to give the song some extra depth. Yet it is “Can You See” from Fifth Harmony that sticks out to me head and shoulders above the rest of the 11 offerings. Extremely catchy, and pop in nature, in a good way, there’s nothing I can really say about this song, as there’s something about the track that is unexplainable. God’s hand is upon this song, and it’s Holy Spirit anointed- that much I do know. Simple in delivery, and with vocalists Ally, Dinah Jane, Normani and Lauren each singing in perfect harmony, we are treated to 4 minutes of some of the best vocal harmonisation and passion I have heard throughout the year (aside from Cimorelli’s two albums, of course!). Though I haven’t heard Fifth Harmony’s discography before, this song reminds me of the fact that in the music industry, you don’t have to sing about sex, drugs and relationship- you can in fact choose to sing about life, about building people up, and about the true reason why we’re all alive. I don’t really know if the members of the band are Christians or not, but like I said in a previous post, it doesn’t matter. God is using these young women to glorify Him, regardless is they know it or not. Well done girls for one of my favourite original Christmas songs of 2017!

I may not have seen The Star yet, but trust me, when I say that I will when the next opportunity arises. I am very intrigued to see someone’s interpretation of what may have happened while Mary and Joseph were travelling to Bethlehem, and these 12 songs more than put me in the Christmas spirit, which each track praising God for His goodness. On par with The Shack soundtrack in terms of production quality, these twelve offerings are the musical counterpart of a journey that we all can embark on, as we dive deeper into the Christmas story, and marvel at the wonder of baby Jesus, born in a manger for all the world to see, and born so that we, who were destined to die, can all live. Well done to everyone involved in this project, as we witness something timeless, and breathtaking come to life in the modern day.

4 songs to listen to: Can You See, Mary Did You Know, Breath Of Heaven, His Eye Is On The Sparrow