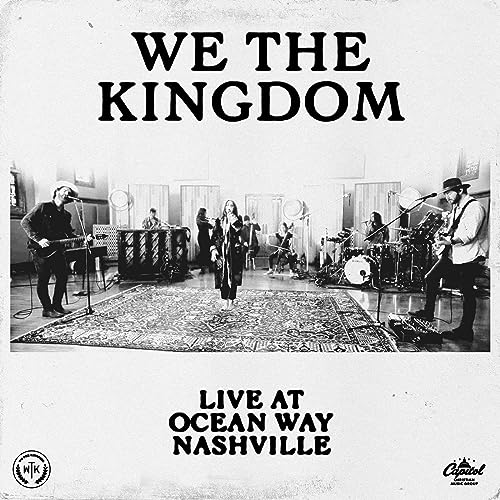 We the Kingdom – Live At OceanWay Nashville (Amazon mp3/iTunes)

‘…as I look around at all of the worship artists (solo and bands) out there; I’m left wondering. Are we in fact at worship saturation point? Well… quite possibly. It’s the point when a worship artist releases a new song, and then we all shrug our shoulders and go about our business- like we don’t really care anymore whether a worship artist releases something new or not. I know I have felt that many times with Planetshakers… but the point is that there is a time, maybe now or maybe into the future, whereby new bands come and they sing praises to Jesus, and we definitely aren’t as excited anymore. For me, worship saturation may be very applicable to some bands (like the aforementioned Planetshakers as well as Jesus Culture and Bethel Music!), however for this next ‘new’ band recently signed to Capitol Christian Music Group, I’m definitely not at saturation point yet. Because We The Kingdom musically is something different. Similar to I Am They, Zach Williams, Passion, Rend Collective and The Crabb Family all rolled into one; the band comprises of songwriter Ed Cash and his family (brother Scott, children Franni and Martin as well as close friend Andrew Bergthold) and is probably the most energetic band since Rend Collective. I know, I know, it’s a bold statement, but one listen to their debut EP Live At The Wheelhouse EP and one or more watches of any of their live videos on Youtube will quickly change your mind. What will also change your mind is the group’s debut album Holy Water which released in August 2020…’ This above quote was from a recent review that we did on the site for We the Kingdom’s first album Holy Water that was unveiled in late 2020. The review of the album was undertaken by my brother Josh, and so I myself haven’t been as across this band as I know that I should. Nevertheless, from what I have heard of this group (songs like ‘Holy Water’, ‘Child of Love’, ‘Cages’, ‘God So Loved’, even ‘Peace’, a collab with Bethel Music, and ‘SOS’, a song originally recorded by Brandon Heath in 2015), We the Kingdom are in fact very much enthusiastic and passionate, and ought to be one of the most intriguing and rejuvenating new CCM acts out there, ever since Zach Williams debuted all those years ago. Yes, ever since then! And so while We the Kingdom will probably never hold a candle to inventive groups like Rend Collective or even Delirious?, their infectious joy and their obvious camaraderie (because they are close friends and family) cannot be ignored. With the band still on their emotional high due to their highly acclaimed success of Holy Water, the band have unveiled to us another musical offering, this time a 7 track EP titled Live at Ocean Way Nashville– recorded at the famous Ocean Way Studios in Nashville; and presented with as much passion and heart as they have done in their studio recordings!

This EP ‘review’ won’t really be that long. We’ve already said what we as a site thought about the band’s debut album here, and when they released a deluxe version of the album, we wrote our own musings about that, and the brand-new song on that release, ‘Take Me On a Ride’, here as well. So, what is it about this 7 track EP that makes me excited, not only about this band, and this EP, but excited about the future of worship music in general? Lemme just say that We the Kingdom are one of the most joyous and inventive bands I’ve heard and seen, since guys like for KING AND COUNTRY and Rend Collective all those years ago, and the most unique ‘new’ artist ever since the bursting-onto-the-scene of Zach Williams, all those years ago. The band’s infectious inventiveness and heart is translated into their live performances as well as their studio recordings, and when we hear the band’s live EPs, as well as their full-length album; we can be immersed in arguably one of CCM’s most exciting new groups, in a long, long time. Taking some of their well-known songs from their debut album (‘Child of Love’, ‘Holy Water’, ‘God So Loved’) and presenting them in a 7-track experience is something that reminds us all, of the power of a live performance, and to bring it one step further, the power of performing at Ocean Way Studios in Nashville.

Many people have recorded at the famed Ocean Way Studios before- from Paul Simon, George Strait, Harry Connick Jr. and Sheryl Crow; to Love & The Outcome, Dan + Shay, Dara Maclean, Newsboys, The Band Perry and Abby Robertson, to name a few. We the Kingdom’s addition to this inaugural list of people who have had the privilege of recording at the famed studio, is something to be declared unique, and this EP is most certainly full of joyous moments and energetic songs, so much so that I firmly believe this EP and the arrangements of the tracks within this musical collection, has captured my attention much more so, than the original studio recordings on their debut album. Yes, I firmly believe there’s something unique in creating something at Ocean Way Studios…maybe it’s like how Abbey Road Studios is a unique place to record in London? Whatever the case, we see this 5-piece band create an EP worthy of replay value; and continues to make me assert the fact that more often than not, live music recorded in a way that is exuberant and skillful (not just dragging on for a spiritual moment…Bethel Music and Jesus Culture, I see you!), trumps studio recordings, and Live At Ocean Way Nashville is evidence of this. We The Kingdom, like artists like All Sons and Daughters, I AM THEY, needtobreathe, Zach Williams and Rend Collective before them, have created anthems for the church, and have changed the worship landscape over the last few years, in such very good ways. Well done We the Kingdom for this live experience. Can’t wait for whatever else the Lord has in store…maybe an acoustic album/remix album/brand new album in the future?

3 songs to listen to: No Doubt About It, God So Loved, Holy Water

RIYL: I AM THEY, needtobreathe, All Sons and Daughters, Rend Collective, Zach Williams