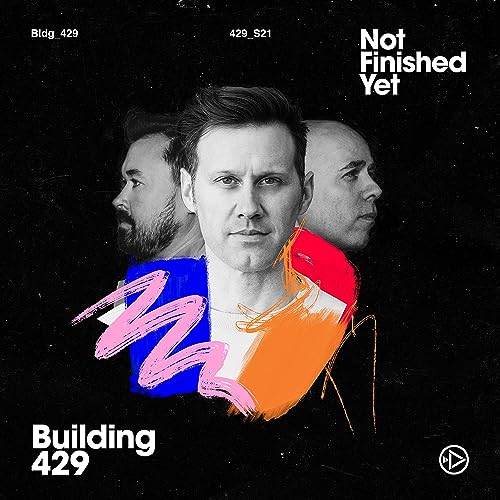 Building 429 has been one of my favourite bands within the last few years. Since the years in the early 2000s where they were an independent band, to when they were signed by major labels and released albums through INO Records, Word Label Group and Provident Label Group- that spawned radio hits like ‘Glory Defined’, ‘Always’, ‘End of Me’, ‘Fearless’, ‘You Carried Me’, ‘We Won’t Be Shaken’, ‘Where I Belong’, ‘Press On’, ‘Unashamed’ and ‘Ocean Deep’, to name a few; Building 429 have won the hearts of many of their fans since the beginning, providing inspirational and uplifiting songs throughout their entire career. Upon the heels of their most recent album Live the Journey that they unveiled to us all in late 2018, the band underwent a creative change when they released ‘Fear No More’ in 2019- this time released not under Provident Label Group but rather released under Building 429’s own label, Third Wave Music. What resulted from moving towards their own label is a song that for me, has become one of my favourites in 2019. Discussing about fear; and tapping into the feeling we as humans want to push aside so bad, this now independent Building 429 continues to wow and impact, inspire and maybe at times challenge, with ‘Fear No More’, that allows us to contemplate whether we ourselves fear in our lives more often than we should. Now here we are in mid 2021, and a lot has transpired since 2019 and their independently produced ‘Fear No More’. The band gave to us an independent worship covers EP titled Remember in early 2020, with standout songs like ‘Canvas and Clay’, ‘Another in the Fire’ and ‘Remember’. The band also gave to us ‘Different’ in July 2020, a track that reminds us all that it is ok to be different, to go against the grain, to have discussions about things that would otherwise be considered as controversial or taboo, and to hold onto what we know God says we are- that it is in our differences and what makes us unique, that we can see that the Lord has things special for us to say, do, and accomplish that is far different from the next guy, and that is ok. Now in 2021, Building 429 has offered to us a new single that just released in June- ‘Not Finished Yet’.

As the song ‘Not Finished Yet’ continues along the vein of the band delivering big songs with anthemic moments of declaration and praise, Jason Roy and co. have once again delivered nicely on a song that reminds us of how good the band is at giving us encouraging songs to powerfully proclaim during both our personal lives, and in corporate worship settings as well. ‘Not Finished Yet’ is no different. As we see Jason himself present to us the story behind the song, we’re reminded that ‘…at a certain point in life, we all get a moment to take a cold, hard, unflinching look in the mirror and take stock of who we really are. On a good day, I know that I can see love, joy, peace, forbearance, kindness, goodness, faithfulness, gentleness, and self-control. The next day, if I’m honest, I might see the exact opposite. The truth is that the COVID pandemic gave us all a LOT of time to look in the mirror and see the things that we wish we knew how to change. I realized that the beginning of freedom and hope was the moment I finally admitted I didn’t have it all together and I still needed Jesus to complete the work in me…’ COVID-19 has hopefully allowed us to look more inward than maybe we even did prior to this pandemic, as such a thing as a debilitating virus can hopefully cause us to change our trajectory in our life, to move from being a self-centred egotistic, to maybe becoming someone that looks at people the way that God sees them. For there is no point in our life that we can say that we’ve ‘arrived’, and even if we think that, we have to acknowledge that the ones who believe they’ve arrived at the goal and don’t need to learn more (or even unlearn some things), are often the people that need to learn the most. ‘Not Finished Yet’ requires us to admit that we are always going to be ‘works’ in progress, and that’s ok. For us to always be open to the possibility of learning, and unlearning, and being humble enough to say that we’re wrong sometimes…it requires boldness, guts, and a level of humility that only Christ can bring. A song that’ll be on my Spotify playlist on repeat for months to come, this is an almost-certain single for the next Building 429 album, right? Maybe the songs ‘Fear No More’ and ‘Different’ are to be included in there, too? Whatever the case, ‘Not Finished Yet’ is a great segue into whatever comes next for the band, whenever that is. A new album at the end of the year? Perhaps. Till then, time to listen to this song, and be encouraged that God is always working in us and through us, even if we don’t even know it!