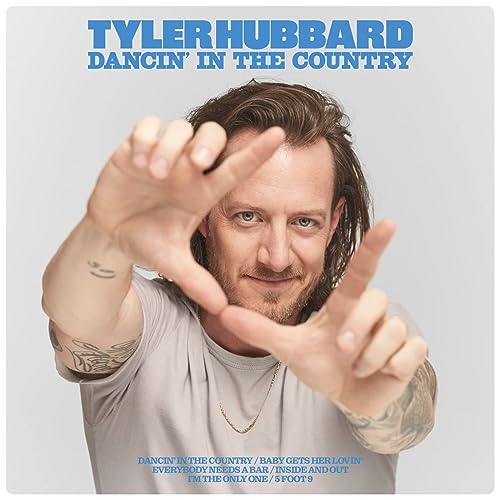 Last year, we claimed that June 25th 2021 was a momentous day in history because of Brian Kelley’s debut solo album release. We reviewed Sunshine State Of Mind, but now it’s time for another momentous day. Today (August 19th 2022), Tyler Hubbard, the other member of Florida Georgia Line aside from Brian, released his debut solo EP Dancin’ In The Country. With Brian and Tyler previously in the past alluding to a band hiatus or a band breakup or ‘spreading of the wings’ or ‘finding themselves apart from each other’ or whatever else they both classify this ‘breakup’ or ‘mutual band uncoupling’ as; the fact of the matter was that they both coined the ambiguous term of testing the waters to see how making music on their own as a solo artist feels like. Thus, we are here at a crossroads, where one of the most successful country acts are in limbo. Sunshine State Of Mind was a critical success… and now we are introduced to Tyler’s work as a solo artist.

Florida Georgia Line are somewhat of a mixed, bag, are somewhat of an enigma. The country duo of Tyler Hubbard and Brian Kelley have been in and around the country music since the formation of the duo in 2010- with their latest album Life Rolls On being their 5th album so far. However, even though Tyler and Brian have their die-hard fans (which doesn’t include myself- I’m only a casual listener!), they equally have their critics and their haters. Some would say these guys are too cliché with their generic lyrics about beers and trucks and girls and summertime and having a good time and more beer and cars and more girls. Yet others feel as if the band revolutionised the country genre and have put the fun back into country music. And there is a smorgasbord of reactions all across the board- and for a long time I was indifferent to the duo. However, I have for the better part of three years, dived deep into the country genre (read all my reviews here!). And let me just say that there’s something about country music that just tugs at my emotions- it’s super honest, emotional, personal and vulnerable holistically; and artists like Kelsea Ballerini, Jana Kramer, Thomas Rhett, Maddie & Tae, Hunter Hayes, Carrie Underwood, Lauren Alaina, Lindsay Ell, Maren Morris, Keith Urban, Little Big Town and Sugarland to name a few (or a lot!), have all resonated with me greatly over the past couple of years.

Sadly though, FGL’s latest album Life Rolls On didn’t interest me one bit- I actually only decided to review their album and check them out properly purely based on the fact that Tyler and Brian were both heavily involved in the production of Chris Tomlin’s album Chris Tomlin & Friends. Alas, even though Chris Tomlin & Friends was a stellar album with hardly a weak spot; Life Rolls On was just… meh. It’s nothing special, but nothing bad either. Tyler and Brian’s hearts are in the right place though, and it’s clear that they’re still having fun here after all these years. And this brings me to Dancin’ In The Country the EP. While Sunshine State Of Mind is an ambitiously long (17 track!), relaxing and comforting album from Brian- and one that is thoroughly enjoyable for myself; Dancin’ In The Country is unfortunately… more of the same old FGL. Maybe it’s because Tyler is the chief singer in FGL generally speaking. But for whatever reason, I expected this EP to be like Brian’s album. I haven’t resonated with FGL and their latest effort (although I might revisit listening to them in the future!). And similar to FGL, Tyler’s EP is unfortunately like the band’s discography. Promising in parts, underwhelming as a whole. Tyler’s passion is here, don’t get me wrong. But there’s something missing here, and until I figure out what it is, then this EP is only going to be… quite mediocre.

The title track is extremely poppy and catchy where Tyler speaks about taking his wife out to his favourite bar where they can go dancing until the wee hours of the morning. It’s a melody that isn’t especially deep, and for a country song, this melody is underwhelming, considering that a lot of country songs are lyrically deep and meaningful. Co-written with Keith Urban, “Dancin’ In The Country” isn’t anything to be excited over, but it does speak about treating your spouse to a great night out (similar in theme to Walker Hayes’ “Fancy Like”)… so I guess the song earns points on that front? “Baby Gets Her Lovin’” is a high point on the EP, and is a country/pop/rock melody that is quite unique melodically due to the presence of fiddles and strings and strong electric guitar, as Tyler champions his wife and places her on an incredibly high pedestal; while Tyler unfortunately presents his lowest point on the album next with the lyrically lazy and musically bland “Everybody Needs A Bar”, where he painfully lists of many reasons why he loves going to his local bar. “Inside And Out”, probably the most vibrant and emotional song on the EP, is a reason why I will still keep giving Tyler a chance, as this melody is a brilliantly sung and beautifully recorded love song from Tyler to his wife, with him declaring that he loves her inside and out; while “I’m the Only One” is sadly another misstep, as it seems to be a rehash musically and lyrically of the previous track- with Tyler saying that he’s lucky to have his wife… but this time in a lyrically lazy way. Dancin’ In The Country then ends with the sweet but super corny love song “5 Foot 9”, where Tyler once again pours out his praise for his wife and relentlessly reiterates how much he loves her.

With FGL ‘parting ways’ so that both members can go solo, but with the band theoretically and technically not breaking up, one could have said that Life Rolls On marks the end of one chapter and the beginning of another. There’s no denying the passion here as Tyler and Brian as a duo are one of today’s most ingenious and enthusiastic groups… yet their potential is yet again not realised here. Life Rolls On is good- but it’s not great. Tyler Hubbard’s solo EP is a mixed bag, and unlike Brian Kelley’s solo effort, which took me by surprise in a good way, this EP is much more expected, with some powerful melodies mixed in with some underwhelming ones. As a singer and a songwriter, Tyler’s best moments are superb (see “Inside And Out” as the perfect example), while other songs are head scratchers (“Everybody Needs A Bar”… really?); and so I do believe that Tyler can succeed and resonate more with myself if he can sing more of the vulnerable stuff. At this rate though, this EP is only ok… but if you resonate with all of it, that’s more than ok because we all have different tastes. I’m still hanging out for Tyler’s full-length album though because I’ve heard enough to be intrigued. But as an EP, I’ll only cherry pick some tracks. Should you all do the same? Well that depends on whether you love bro-country or not.