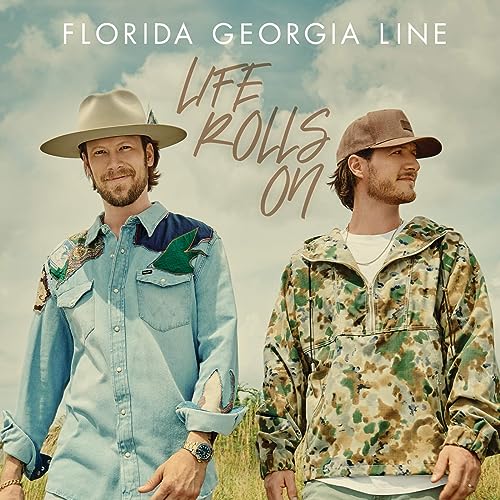 Florida Georgia Line are somewhat of a mixed, bag, are somewhat of an enigma. The country duo of Tyler Hubbard and Brian Kelley have been in and around the country music since the formation of the duo in 2010- with their latest album Life Rolls On being their 5th album so far. However, even though Tyler and Brian have their die-hard fans (which doesn’t include myself- I’m only a casual listener!), they equally have their critics and their haters. Some would say these guys are too cliché with their generic lyrics about beers and trucks and girls and summertime and having a good time and more beer and cars and more girls. Yet others feel as if the band revolutionised the country genre, and have put the fun back into country music. And there are a smorgasbord of reactions all across the board- and for a long time I was indifferent to the duo. If you’ve been a frequent observer of our site, I’m sure you all know my thoughts about country music. If you have read any of my country reviews here or my 9 country blogs here (as well as Jon’s many country blogs as well!); you can probably understand and grasp that the genre I immediately took to and delved deep into, after spending the better part of most of my entire life listening to CCM, is country music. What for, you ask- I mean I’m not American, and most of country music speaks about the traditions and the history and the stories of Americans… so it doesn’t make sense, right?

Well, let me just say that there’s something about country music that just tugs at my emotions- it’s super honest, emotional, personal and vulnerable holistically; and artists like Kelsea Ballerini, Jana Kramer, Thomas Rhett, Maddie & Tae, Hunter Hayes, Carrie Underwood, Lauren Alaina, Lindsay Ell, Maren Morris, Keith Urban, Little Big Town and Sugarland to name a few (or a lot!), have all resonated with me greatly over the past couple of years. So how does Florida Georgia Line fit in? Do Brian and Tyler do enough musically and lyrically on Life Rolls On for them to force their way into my list or Jon’s list for influential artists of all time or future influential artists in 5-10 years’ time? I first became probably more and more interested in FGL ever since I heard Chris Tomlin’s album Chris Tomlin & Friends, which Tyler and Brian both were involved in the production and mostly everything behind the scenes. The duo were also present as guest vocalists in 3 songs (“Sing”, “Forever Home” and “Thank You Lord”), so as we fast forward to now- it’s time to see how Life Rolls On sounds like and whether the project lives up to the hype… and let’s just say that the album is ok- nothing special, but nothing bad either. It’s not enough for FGL to force their way into any list Jon and I have at the moment; however Tyler and Brian’s hearts are in the right place, and it’s clear that they’re still having fun here after all these years.

Opening proceedings on this mega-16-song-tracklist is the grateful and thankful “Long Live”, where Tyler and Brian relay in true pop-country generic lyrical fashion their appreciation for many aspects of their life. As they belt out the catchy lyrics of ‘…long live all the small towners, sunup to sundowners, that old school Haggard and Hank, long live longneck bottles and wide-open throttles, and old dirt roads with no name, long live them country girls, long legs and cut up jeans, long live this way of life, long live nights like these…’, we are met with a tune of joy and happiness, as FGL highlight their love for their small hometown and their love for their life at the moment. “Life Looks Good” is next, and as Tyler and Brian express their love for their spouses, and highlight the fact that ‘…life looks good, sittin’ next to you, up on the hood, underneath the moon…’, we are met with an honest and personal track that is bound to be a fan favourite at future concerts; while the slower-paced summery and breezy “Countryside” speaks about a road trip between lovers from the city to the countryside, and their appreciation for the slowness of life in the bush and in the middle of nowhere. It’s a track I can’t fully appreciate, as I’ve never been to America and haven’t seen the city or the country- but this track reaffirms my curiosity of wanting to travel there sometime in my lifetime.

“Always Gonna Love You”, a lyrically cliché pop/country melody, is the band’s ode of love to their wives, and the fact that ‘…I’m always gonna love you, always gonna love you, when the sun burns out and the cows come home, from now ’til forever something you can count on…’; while the energetic rocker “I Love My Country”, complete with Americanised imagery similar to in “Countryside” that sometimes goes over my head, is a track that specifically speaks about the duo’s love for their country while they’re at home during quarantine- as “…this song could not be more appropriate for a time like now. We’re all living in uncertain times or quarantined, not really sure what the future holds. But we’re still loving life, still having a good time and this song really, really does that for us. It brings us so much joy and makes us feel so good, and we hope it does the same for you guys…”. The religious-style parody type of track “Hard To Get To Heaven” somewhat downplays the significance of eternal life, as Tyler and Brian relay that their spouses are like angels, so they are in heaven every day when they’re in their presence (and some could say that it’s blasphemous, but I reckon it’s just lazy writing that creates confusion with super-devout religious listeners and critics; while the poignant and heartfelt piano led ballad “Long Time Comin’” speaks about the duo missing their families when on the road, and the active decision to spend more time with the family, and especially with their spouses, whom they want to show their intense love and affection for.

For all of the pluses on the first half of Life Rolls On; we are then bombarded with the lowest points on the album. On a track list that stretches to 16 songs, we’re bound to receive some stinkers- and FGL has delivered quite a number of them here, unfortunately. “Ain’t Worried About It”, attached to a 30 second ‘Interlude’, is lyrically vague and quite lazy as well, with Tyler and Brian relaying that they aren’t worried about anything when their spouse is with them (truly this song is painful to listen to!); while the excruciating and unnecessary “Beer:30” glorifies day drinking, and is 2 minutes and 19 seconds too long… although the song does have some points for including a banjo! “New Truck”… well, that 2 and a half minute track glorifying their truck, isn’t much better than a song glorifying beer. Thankfully, “Eyes Closed” musically is better, and lyrically speaks about how the duo’s love for their spouse isn’t dependent on the power and electricity- they can love them all the time, however this song is just ok, and not that ground-breaking.

“Second Guessing”, a track written by Ryan Tedder, Shane McAnally, Esther Dean and a whole bunch of other writers on Songland, surprisingly is one of the album highlights here, as the jovial, happy-go-lucky, laid back ballad speaks about satisfaction and contentment in their spouses, as the duo powerfully declare that ‘…since I met you, I, I ain’t spent one second guessin’, I made up my mind, I never knew, I just had to find my direction…’; while the worshipful and prayerful “Good To Me”, has Tyler and Brian explicitly thanking God for their life, and they cry out that ‘…God’s been good to me, God’s been good to me, on this front porch with my baby, nowhere else I’d rather be, I can just look around, it ain’t hard to see, God’s been good, so good to me…’– on a track that probably fits better on Chris Tomlin & Friends. “U.S. Stronger” follows, and is a definite album highlight, as the potential radio single encourages us all in our walk of life, especially when the duo relay that we can rely on our friends and family to build us up, that ‘…when we fall down, we get back up, we shake it off when things get tough, we hit our knees and pray for help, ’cause we ain’t ever by ourselves, we lean on love and love to lean on one another, ’cause what don’t take us, bend us, break us makes us stronger…’. Life Rolls On then ends with the title track… and these guys have saved the best for last. With Tyler and Brian once again thanking God for where their life is at in this very moment, the lyrics are vague, and speak about time not slowing down for no man, and that as long as we’re breathing and our heart’s beating, then we still have a purpose and we still have meaning- yet there’s something about this track that brings a smile to my face. There’s honesty and hopefulness and vulnerability here, and the fact that these guys have strung together 4 solid tracks in a row- that’s quite remarkable.

You’d think that a track list of 16 songs would find you with more winners than losers. But with Florida Georgia Line’s Life Rolls On, you have just as many hopefully and powerful melodies as tracks that are downright silly and ridiculous. With FGL ‘parting ways’ so that both members can go solo, but with the band not breaking up, one could have said that Life Rolls On marks the end of one chapter and the beginning of another. There’s no denying the passion here as Tyler and Brian as a duo are one of today’s most ingenious and enthusiastic groups… yet their potential is yet again not realised here. Life Rolls On is good- but it’s not great. The last 4 songs saved this album from embarrassment- so shall you all listen to one of the biggest bands currently in country music? Up to you, but I’d cherry pick songs- and then be on the lookout for the solo projects from Tyler and Brian later on this year. It shouldn’t be worse than the mediocre effort, right?

4 songs to listen to: Life Looks Good, Good To Me, U.S. Stronger, Life Rolls On