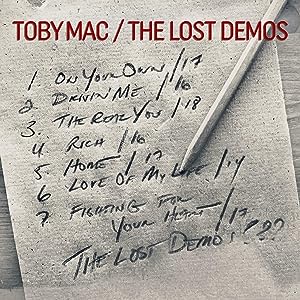 ‘…If we as a human race haven’t figured out already that TobyMac and his music is as much needed in this society, as it is influential to music as a whole, no matter what musical genre we are inclined to first listen to, then the love we profess about music in general needs to be re-evaluated. For TobyMac is a revolutionary- he’s even created his own quasi-musical genre- musical gumbo, as he calls it. It’s not just pop or worship, nor is it full-on hip hop either. Many of his albums have been an exploration of different genres, and this new 2018 album The Elements showed us a more broader soul-hip-hop/blues-pop element, a reminder that Toby and only Toby can undertake different genres with such grace and poignancy, and for the end result to come out looking and feeling like one genre, rather than a million different genres mashed up together. In fact, Toby himself has given life to musical genre infusion over the last decade or so. No other artist in my opinion can easily travel between pop, rap and hip hop so easily (maybe perhaps Group 1 Crew) within the CCM industry, and thus, Toby and his music is very unique to a Christian music industry that is sadly one where sameness and familiarity are championed over edginess and out-of-the-box songwriting…’ Above is a quote that I wrote about TobyMac and his influence in the CCM industry, in relation to his brand new 2019 album The St. Nemele Sessions. It is a reminder of the necessity of people within and around the CCM industry that can push the envelope and create music that has a lot of crossover appeal, while still holding true to core values that made the music unique and heartfelt in the first place- TobyMac is one such artist that has the ability to create music that can transcend boundaries. Mind you, there are other artists that have both impacts within and outside the CCM industry- you need not to look outside artists like Skillet, Switchfoot, needtobreathe, and more recently Lauren Daigle and for KING AND COUNTRY, to get an idea of artists and bands that are ingenius in creating music and a brand that can impact and influence not only in their initial select circle but also outside the confines, comfortability and security of the four walls of the church.

Since Toby’s early days with good ol’ DC Talk, his ability to stand tall in 2020, around 20 years after the ‘hiatus’ of the band, still making music, is a big, big feat. TobyMac, alongside fellow artists Michael W. Smith, Steven Curtis Chapman and Amy Grant, is one of the only artists who had major success in the 1990s that has continued to stay relevant and relatable in this ever-changing culture now. In his mid 50s, Toby is still energetic and enjoys making music, and its clearly evident by the various music videos and albums he has created since the start of his solo album career way back in the early 2000s. While die-hard fans of DC Talk have lamented the loss of a passionate and innovative band; what has transpired from the indefinite hiatus is a career that is fast becoming one of the most respected and admired in recent CCM history. With career topping radio singles spawning from his illustrious and dynamic career thus far- from songs like “Made to Love”, “City on our Knees”, “Lose My Soul”, “Tonight”, “Get Back Up” and “Me Without You”, to “Irene”, “Gone”, “Atmosphere”, “I Just Need U”, “Burn For You”, “Til the Day I Die”, “Scars” and “Speak Life” to name a few; what Toby continues to bring to the table of musical genres and songs that tug at the heart of listeners, is something new and fresh- that a guy in his mid-50s can be relevant both musically and in the message that the song is bringing, is indeed an art.

Now fast-forward to 2020. We’re all isolated from one another, locked down in our homes, either by choice or by mandatory acts of law, as we fight to curb this COVID-19 epidemic. And it is in this epidemic and its subsequent quarantine, that has led Toby to release this new project. Well…it’s not really new- these are indeed demos of songs that have missed the final cut- not on any proper album release in the past because of whatever reason. And it is during this season of introspection, contemplation and simple realigning that Toby has managed to rummage through his old music material to dig up 7 demo recordings (at various stages of the recording and demo process) to create and EP of sorts that has showcased songs that have in fact died too soon to be on any proper release…until now. The Lost Demos show to us a lot of lost demos between the album releases of 2015’s This is Not A Test and 2018’s The Elements, and reminded us that just because a song is shelved from a particular album doesn’t mean that that particular track isn’t good- these 7 songs on the EP are evidence and proof of that. With acoustics, light percussion and electronics being the forefront in most of the recordings, Toby has delivered a near flawless EP (the only gripe for me is that it’s too short), and if anyone who didn’t know these songs were demos…well, I don’t think, upon first listen, you’d think they are. Which is a great compliment to the musical arrangements of these melodies, melodies that I can hope will find a home in live sets as Toby goes on tour sometimes in the future whenever these restrictions are lifted and the virus is under control.

‘On Your Own’ employs electronics galore as this track was originally meant for The Elements; but was culled at the last minute. In fact, ‘On Your Own’ the song actually inspired the EP The Lost Demos to even take place, as we see that such a song as this, was heard by Toby one day, and what led on from there was an exploration of other tracks- demos that were finished and also dear to Toby’s heart, songs that would be no good just sitting on a laptop, but rather released into the world during a season and time where recording in studios happen infrequently. The song itself is a reminder that we will never be on our own during trials and difficult seasons- God is always there rooting for us, right beside us and championing us as we go about our days, however seemingly difficult they can be. ‘On Your Own’ is one the most lighthearted songs on the EP, as we are to never forget that we all have each other in this life- friends, family and God, and we are never truly alone when everything comes down to it. ‘Driving Me’ follows along from ‘On Your Own’, and while the song itself has a similar theme to that of 2018’s ‘I Just Need U’ (and maybe didn’t fit the cut of The Elements because of that), ‘Driving Me’ still has a great acoustic flavour and a looping percussion beat (and a whole lotta car driving references), to remind us of the control we need to surrender to our Father, letting Him take the wheel of our lives and to show us things that we may not have seen, or understood, or we may have been to blind to realise that was good for us all along instead of the other path we may have been on. ‘Driving Me’, to me, feels like ‘I Just Need U 2.0’ and that isn’t a bad thing at all.

Throughout the rest of the EP, Toby has gifted to us songs that have been continually special to his heart, songs that I’m sure has challenged himself during this uncertain season, and songs that can hopefully challenge us as well. ‘The Real You’, aside from the heartbreaking and heartfelt song ’21 Years’ that sadly released at the beginning of this year (in light of his late son’s passing), is quite possibly Toby’s most intimate and poignant song, also about his son whose life tragically ended at the end of last year. A song that was recorded during the early stages of The Elements production, Toby gives to us ‘The Real You’, a song that travels into the dynamic of Toby and Truett’s relationship leading up to the years prior to Truett’s untimely death, and how Toby was in fact desperately trying to reconnect with his son on a soul-to-soul level. The song itself is a reminder for us to always foster and fuel the relationships dear to our hearts, especially during a time in isolation that can bring with it, levels of unprecedented loneliness and other mental health issues. The funk and soul are cranked up to 11 with the 2016 demo of ‘Rich’, featuring both Toby and Mr Talkbox, as the theme of being rich in love, and rich in family, friends, and relationships, is brought to the fore, as we’re reminded that lifelong bonds are often cultivated and grown during times of difficulty, as opposed to the money that people want to be rich in that fades away at the end of the day; while ‘Home’ has a light electronic keyboard feel (a la the 1990s or even the 1980s keyboard arrangements) as we see a confession of sorts from Toby, quite possibly written from the eyes of the prodigal son, and his admission of wrongdoing and wanting to come home to the place where he knows he belongs irregardless of what he has done. ‘Love of My Life’ feels the most complete out of the demos; and is a track whose theme leans similarly on ‘Love With Your Life’, a song by Hollyn back in the day. Thematically, Toby’s song is also similar to, as we’re reminded through declaratory statements that ‘…You are the fire that I feel inside, You are the stars on my blackest night, You are the beat in this heart of mine, You are the love of my life…’; as the EP then ends with ‘Fighting For Your Heart’, a track completed (for the most part) in 2017, and is a song of Toby’s unconditional love for his wife Amanda, as he fervently and emotively declares with poignancy, that ‘…I would take a bullet for you, I would take the fall, and I will be the last man standin’ when everyone else is gone, oh, my love will find you no matter where you are, and I will be the last man standin’ by you, fightin’ for your heart…’

So there you have it: The Lost Demos. Frankly, I had a blast listening to this EP, and I’m reminded that songs are still worth it, their merit not lost no matter how far along in their production journey they are. A lot of these songs may not have seen the light of day, and yet this COVID-19 period was the tipping point for a lot of these songs to be released. And the result? 7 great melodies that could’ve fitted on any album if they wanted, and songs that are just plain suitable for the season we’re in. An EP that I know I’m going to repeat for a while yet, this is a great listen if you’re a fan of Toby and his previous music, a fan of pop/hip-hop, or just a fan of music with a great mish-mash of genres, as we’re reminded that songs like this can get us through a difficult season where relying on our friends, family and God Himself is what will get us though such a uncertain as this. Songs like ‘On Your Own’, ‘Rich’ and ‘Home’ are great standouts for myself, and songs that will continue to anchor me a lot during this season of life, however long it may be. Well done Toby for this EP, can’t wait for another full length album, whenever that arises!

3 songs to listen to: Rich, Home, On Your Own