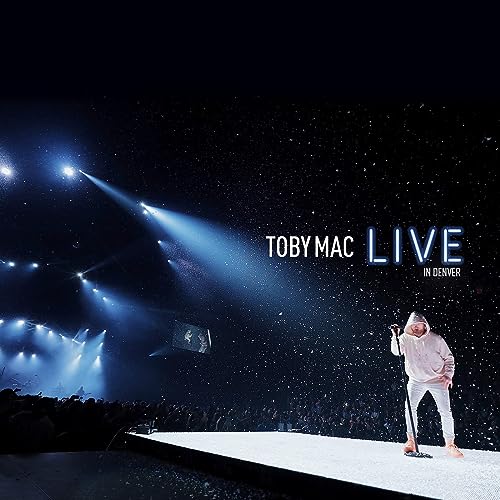 TobyMac needs no introduction. No, he really doesn’t. We’ve been giving Toby coverage on the website for quite some time now, and it’s been an unspoken understanding that his music is perhaps one of a few that has lasted the test of time all these years. In fact, dare I say that TobyMac, along with fellow artists like Michael W. Smith, Amy Grant, DC Talk, Steven Curtis Chapman, Carman, Rich Mullins, Newsboys, Delirious? and Audio Adrenaline, are quite possibly some of the artists who had major success in the 1990s that have continued to stay relevant and relatable in this ever-changing culture- maybe even more so now than back then? Sure, artists’s popularity change with the decades- artists like Rich Mullins and Carman have since left us to be with God all too soon, and their music aren’t as familiar with people now compared to back when each of these artists released material; but what still remains are the songs of these bands and artists- their message, impact, and influence, in this time now, is very much necessary as it was 5 years ago, 10 years ago, even 20. In his mid 50s, Toby is still energetic and enjoys making music, and its clearly evident by the various music videos and albums he has created since the start of his solo album career way back in the early 2000s. While die-hard fans of DC Talk (yes, the band that Toby was in back in the day) have lamented the loss of a passionate and innovative band; what has transpired from the indefinite hiatus of the group, is a career that is fast becoming one of the most respected and admired in recent CCM history. With career topping radio singles spawning from his illustrious and dynamic career thus far- from songs like “Made to Love”, “City on our Knees”, “Lose My Soul”, “Tonight”, “Get Back Up” and “Me Without You”, to “Irene”, “Gone”, “Atmosphere”, “Burn For You” and “Speak Life” to name a few; it was and quite possibly still will remain, his 2015 studio album This is Not a Test that has become one of the most musically diverse and universally praised albums of his career thus far.

Spawning hits from that album, like ‘Til the Day I Die’, ‘Love Broke Thru’, ‘Move (Keep Walkin’)’, ‘Feel It’, ‘Backseat Driver’ and ‘Love Feels Like’ (featuring the reunion of DC Talk); Toby’s steady flow of albums continued to be his best asset- following on from This is Not a Test in 2015, was a live album Hits Deep that was released in 2016- a review of that CD/DVD can be seen here. The Elements closely followed in 2018 (with songs like the title track, ‘I Just Need U’, ‘Everything’, ‘See the Light’, ‘Scars (Come With Livin’)’ and ‘Hello Future’), but what Toby has experienced lately that has caught media attention and has garnered a lot of press, happened at the end of 2019, when Toby’s family lost his first-born son TRU-Dog, and he passed away. While it’s no surprise that Toby continues to wear his heart (and faith) on his sleeve, his firm belief in Christ came to a test during that time period- just like how Steven Curtis Chapman had to wrestle with questions during 2008 when his daughter Maria died, so too did Toby wrestle with what he had to go through in late 2019. Now in 2021, and a few songs later (’21 Years’ released in early 2020 and was inspired by his son’s death and him processing that, ‘I’m Sorry (a lament)’ was a song in response to all the civil unrest and social issues brought to the fore in light of the murder of George Floyd in May 2020, ‘Help is On the Way (Maybe Midnight)’ released early 2021), Toby is once again back with another album- Live in Denver.

Hits Deep the live album released in 2016, and while it’s been approximately 5 years since the release of his last live album, what I’ve generally said about his previous live album in the review I wrote for it back then, can still be applied to this album here now. Live albums generally are a mixed bag- you try to capture in a set-list, around 15-20 songs, a fair amount of them from the latest album (let’s say around 9 – 10), and then the rest of songs sung on the night (placed on the album too) are songs from the rest of their career. So in a general sense, live albums can be hit and miss- you can have good albums like Farewell Show (Delirious?), but then have live albums that don’t necessarily capture what the studio albums from the same particular artist, has to offer (a lot of Hillsong, Planetshakers and Jesus Culture albums). Nevertheless, Toby’s new offering is just as poignant as it is fun filled. One glance through the line-up of songs present, here on this 15-track digital-only album (the physical DVD/CD comes out in September, and the DVD may consist of more than 15 tracks), and we can see a fair few from The Elements– ‘See the Light’, ‘I just need U.’, ‘Everything’, ‘The Elements’, ‘Hello Future’, ‘Starts With Me’, ‘Overflow’ and ‘Edge of My Seat’ are all given the TobyMac live experience, and we can all see his energetic flair delivered through these tracks that seem to elevate them on a joyful and poignant level compared to their studio counterparts. I’ve always been an admirer of The Elements, even though as a whole, I firmly believe that THIS IS NOT A TEST is more cohesive and is a lot more joyful at times. But one thing about The Elements is that it does present a sense of struggle that we all can find ourselves in on a daily basis- it’s not as happy-go-lucky that his 2015 album is, and maybe that’s ok. There’s a sense of wrestling through things when it comes to The Elements– the title track can show us that.

And that is why I believe Live in Denver– with a fair amount of songs from The Elements, is very much needed now in this time of 2021- around the world people are struggling in their own ways, and to hear sentiments from Toby in song, that people in celebrity status struggle sometimes too, is refreshing to hear, especially on an album that includes one of Toby’s most vulnerable songs to date, ’21 Years’. In fact, ’21 Years’ would arguably be one of the hardest songs Toby ever had to write and record. And I’m sure everyone would know why- if you don’t know about Toby’s son, then google is a good help, and we can know that ’21 Years’ was borne out of that season of difficulty and trials. It’s very sobering and humbling to see a man who has lost his first-born son, and still through all the pain that comes from such a tragedy, still preaching the gospel of Christ to people. Sure, people who have suffered loss like a child exiting the world before their time, will never be the same again. I’m sure Toby hasn’t. Yet Live in Denver shows us this one thing- that regardless of personal circumstances, songs can be an avenue of healing, and maybe, Live in Denver and a lot of songs from The Elements, could be a source of hope and healing for Toby himself as well.

Aside from songs from The Elements and ’21 Years’, Toby also presents a few fan-favourites from years gone by in this 15 track-list, albeit a short one. ‘Love Broke Thru’, ‘Move (Keep Walkin’)’, ‘Til the Day I Die’ and ‘Speak Life’ (featuring co-writer Ryan Stevenson, who also recorded his own version of the song on his 2013 EP Holding Nothing Back) are all standouts from Toby in years gone by, present here on Live in Denver, while you can’t really have a Toby concert without songs like ‘Me Without You’ and ‘Lose My Soul’, right? All in all, Live in Denver focuses more on Toby’s later albums, and while I felt that 15 tracks were a tad too short (maybe the DVD has extra songs!), Live in Denver is still great for anyone who collects Toby’s albums, or just anyone who hasn’t been to a TobyMac concert; and would like to hear what it sounds like. Sure, nothing beats the real thing, but albums like Hits Deep and this new one Live in Denver come real, real close.  An album that can hopefully tie us over until the next album release (whenever that occurs), Toby in his own right, is one of CCM’s most accomplished and heartfelt, and an icon not just within the confines of CCM, but in the wider, broader music community at large as well. An artist who is almost certain to continue to make music well into his 60s (if his energy and enthusiasm is still going, then why not?), Toby’s enthusiasm in his songs, is what sets him apart from a lot of his contemporaries. Rarely do you see someone in his 50s, in any music genre, have as much joy and charisma as Toby has right now. Well done Toby for Live in Denver, can’t wait for the CD/DVD companion to be out in September 2021!

4 songs to listen to: Everything, Til the Day I Die, Edge of My Seat, 21 Years