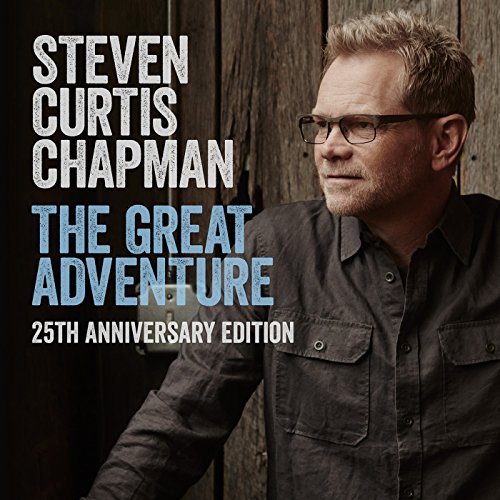 Steven Curtis Chapman. Everyone knows him and his music. Or everyone should know him. And if you don’t…well, I guess google will be your friend on this, right? So now that we’ve got that out of the way… let’s get down to the statement at hand. Steven has been within and around the music industry for quite some time. In fact, shall I say that aside from artists like Michael W. Smith and Amy Grant, Steven has been one of the pioneers of Christian music? After a career spanning for more than 20 years, first on Sparrow Records and now on Reunion Records, Steven’s ability to deliver musical poignancy and heartfelt encouragements time and time again has been nothing short of exemplary. It was his journey through adversity in 2008 that led to his faith even being tested, yet still to the other side with confidence of God’s providence for his family, that has continued, even to this day, to be a testament to the power of hope and trust in our Father. While no one wants to walk through what Steven and his family ventured through way back in 2008, what Steven has delivered in the albums since his daughter’s death have been such where we have witnessed the work God has been undertaking in not only his own life but in the lives of the Chapmans; as a whole.

Since having his humble beginnings in the late 1980s, there has been many songs that have charted the radio at numerous points throughout his career. You know the songs- Dive, Speechless, Live Out Loud, Let Us Pray, Lord of the Dance, Signs of Life, Magnificent Obsession, Live Out Loud, The Glorious Unfolding, Love Take Me Over, Do Everything, More To This Life, For the Sake of the Call, Not Home Yet…and I’m sure there are many, many others. Steven as an artist has given us songs that speak to the very heart of us, all the while entertaining us and reminding us that Christian music can still be cool and relevant, encouraging and hopeful, all at once. Then there’s another song that Steven has recorded, perhaps one of his first songs that received much recognition as it did. The song in question wasn’t from his first few albums (First Hand, Real Life Conversations, More to this Life, For the Sake of the Call), but rather came from his 1992 album The Great Adventure, and yes, the song is the title track. Let me say this- 2017 marks the 25th album anniversary of The Great Adventure, quite possibly the album that allowed SCC to become one of CCM’s greatest as the years continued to roll on.

This is not a review per se. I can’t really do a review of a song that was first created 25 years ago. Let’s just say that this is my thoughts on the re-imagined version of an already great song. As quoted in an official press release, ‘…It was twenty-five years ago on November 18, 1992 that Steven Curtis Chapman released The Great Adventure, an award-winning album and single that would be a turning point in his career. The Great Adventure would go on to earn Chapman four Dove Awards – Song of the Year, Pop/Contemporary Recorded Song of the Year, Short Form Music Video of the Year, as well as for Pop/Contemporary Album of the Year. The album also won the 1993 GRAMMY® Award for Best Pop/Contemporary Gospel Album. In celebration of its 25th Anniversary, Chapman has recorded a brand-new version of the title track, “The Great Adventure,” along with Bart Millard. To coincide with the song, a new music video has also released…’ And to hear the reimagined version featuring Bart, frontman of MercyMe, along with Colony House involved in the instrumentation of the track (as they are shown in the music video of the song), we are reminded that such a song like this is as timeless as ever. Hearing this song, even 25 years later, gives me more reason to declare that Steven and his music has made such an impact on myself in my own spiritual walk over the years. This is a must-have song for anyone who is as nostalgic as me, or anyone who loves to hear some vintage CCM and be reminded that songs like ‘The Great Adventure’ only come around every so often. That a timeless song can have an impact to move and shake a generation as much as a powerful sermon can. Steven, though in his 50s, executed the track perfectly. If this reimagining is on WOW Hits 2019, maybe I’m ok with that. Besides, WOW Hits wasn’t around during 1992, when ‘The Great Adventure’ was a hit. Maybe now the song can receive the recognition it has been wanting throughout this whole time! Kudos to Steven for such a powerful track. Can’t wait to the next full length album, whenever it arises!

And that’s it. ‘The Great Adventure’. A song, written and recorded in 1992. And now re-recorded with guest vocals now, 25 years later. And even so, it is still as impactful now as it is then. Who knows, maybe more re-recordings of past hits in the future? Maybe, maybe not. But what I do know is this, that, and I think I’ve stated this before in my post, that Steven, alongside Amy Grant and Michael W. Smith, are some of the pioneers of modern CCM as it stands today. And ‘The Great Adventure’ plays its part throughout the years as well. And so, what are we waiting for? Drop whatever you are doing and become fully nostalgic in this song. Because, there is nothing more motivating and encouraging than a song coated in nostalgia and yesteryear atmosphere to remind us that the same songs that moved a generation before can still do so today!