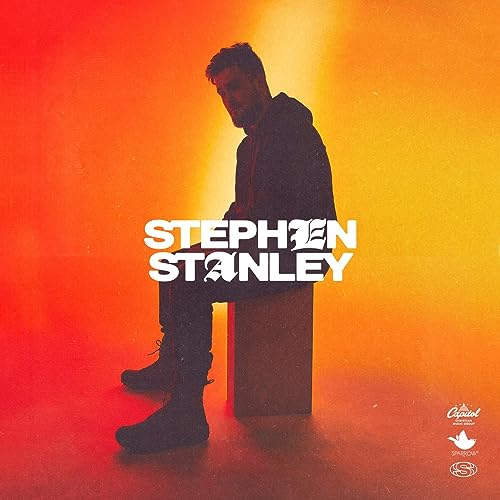 Over the past few years, ever since I’ve gone alongside my brother Jon and embarked on the musical journey of diving deep into influential artists of all time, and future influential artists; I think I’ve found myself a whole lot more intentional in terms of discovering new music- and new music that inspires and resonates and says something meaningful. Be it ‘Christian’ or ‘mainstream’ or anything in between; I’ve recently been wanting to be challenged and be drawn out of my comfort zone. I’ve found recently that some Christian music is somewhat stale (sorry Sidewalk Prophets!), whereas some mainstream albums this year stirs my soul (thanks to Demi Lovato, Delta Goodrem and Thomas Rhett to name a few!). So just because an artist is labelled as a Christian… does that make their music ‘superior’ to everyone else?

One such artist whom I have recently been actively listening to, is Stephen Stanley. I first became acquainted with his music from his cover of “Bridge Over Troubled Water” not too long ago, as that version was present on a Spotify playlist I was listening to one day. And while though a Christian, Stephen’s music is certain to tug at the emotions of everyone. With a honest and vulnerable testimony and a passionate heart for Jesus, we are met with a solid self-titled EP that dropped recently; and as I am looking at this EP from a lens of a ‘new artist’ as opposed to ‘new Christian artist’… can I just say that this EP is one of my favourites of the year, and that listeners of any faith (or even no faith!) should listen to this EP and be inspired and blessed?

My whole life I’ve known that I wanted to be in the Christian music world, but it took me a few years of writing to figure out exactly what I wanted to say. At some point I started to use my songs as a way to talk about mental health, and about how God has helped me to get through things like anxiety and depression. The way I write now is to try to be as introspective and open about what I’m feeling as I possibly can, with the idea that it will hopefully translate to other people who are going through something similar

I feel like my generation wants to try to change the world, and we’re slowly learning that it’s not that easy. I really believe that love—and specifically the love that God offers—is the answer to so many of the problems we’re dealing with right now, whether it’s hatred or injustice or lack of unity. I hope my music helps to remind people of that, and helps them to feel a little uplifted and encouraged whenever they get overwhelmed.

Vocally similar to Elias Dummer from The City Harmonic, as well as country rockstar Chris Stapleton, Stephen bounds out of the gate with the energetic and pulsating “Oasis”, a radio friendly admission and prayer of sorts. And as Stephen passionately and explosively reiterates that he needs Jesus to live, and that he needs Jesus to be his oasis in this desert called life; we are met with one of the most vulnerable and honest songs of the year, and a hope that we can draw closer to Jesus if we just allow Him to move in our lives. The piano prominent slower-tempo ballad “Listen” is next, and eloquently speaks about the importance of the concept of God’s Love and how it’s higher and much more powerful than anything and everything else in this world. As Stephen fervently highlights that ‘…Love itself will make a sound, like drums of fire and ringing bells, evil will never keep us down, oh Heaven ain’t afraid of hell…’; I am thoroughly impressed by the quality of lyrics and music here… for an artist in his debut project!

‘No Hopeless Soul’ came from thinking about how a lot of people feel condemned by things in their past, or by something about themselves that they’re not proud of. We all have days where we feel like we’re not good enough—I know I feel that way sometimes—but God doesn’t just reject you because of something you’ve done wrong. The truth is that everyone is redeemable, and that’s the message that I wanted to send with this song.

One of the most hopeful and inspiring songs I’ve heard all year is the musically impressive and theologically sound lead single “No Hopeless Soul”. As Stephen passionately cries out that ‘…there ain’t no lost cause, no one’s too far gone, don’t you know there ain’t no hopeless soul, you still belong to the God who stays with you, He won’t let go…’, we are reassured of God’s promise and His faithfulness and His unending love to us- it goes beyond human comprehension and is utterly flabbergasting, but nonetheless still true. We were hopeless, and with God we’re not. It’s as simple as that, but yet still boggles the mind sometimes. The revealing and at times too vulnerable “Lifeline” is next and the penultimate track; with Stephen diving deep into the themes of depression and mental health issues, and ultimately concluding that Jesus Christ can restore our mind and can make our whole entire being whole. Stephen Stanley EP then ends with the free-worship like heartwarming and potentially prophetic “Heal”, co-written with Ben Cantelon; as Stephen beautifully relays that while Jesus Christ can and often does heal us from our pain and hurt, there are times where He uses us to be part of the solution- so that we can sit with the person and be in their pain with them. Sometimes the most healing thing of all is for brothers and sisters in Christ to sit with each other, and not expect to move. It’s in those moments where He can do and often does something truly remarkable and wonderful.

Stephen Stanley’s self-titled debut EP is way too short! It’s only 5 tracks, and is over before you know it. But this is just a taster for the full length album coming soon… and such I’m extremely anticipating Stephen’s debut album. So should all of you as well! Don’t believe me? Take a listen and be amazed and in wonder. Something will grab at you, I guarantee it! Now, don’t you think that this is all the more astonishing given that Stephen only has hearing in one ear?

3 songs to listen to: Oasis, No Hopeless Soul, Lifeline