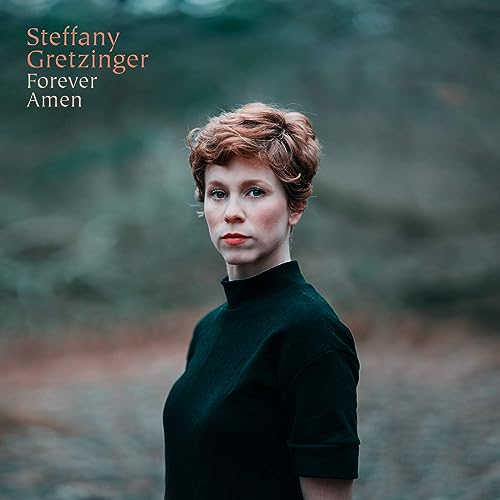 Bethel Music, as a label and as a church, has housed many successful and poignant solo worship artists over the years- Brian & Jenn Johnson, Amanda Cook and Jeremy Riddle are the artists that immediately come to my mind (even though both Amanda and Jeremy have since moved on from Bethel!), and are probably the most popular and well respected. Steffany Gretzinger is another such popular artist (within the realms of Bethel)- and with her highly praised and acclaimed sophomore album Blackout being one of my favourite albums of 2018, it’s time for Steffany to release her next project- a more subdued worship album called Forever Amen, released via Provident Label Group at the end of March. While many of us may be interested and intrigued to hear what Steffany has to say on her debut project away from Bethel…some of us wouldn’t even care less. But for me, who was quietly confident that Forever Amen would be pretty good based on how much I thoroughly enjoyed Blackout, I found Forever Amen to be very poignant, emotional and honest, as we are introduced to some of the most impacting and intricate worship albums of this year thus far. Sure her first album The Undoing was more traditional worship, and Blackout was more alternative rock, yet this release is where I reckon Steffany shines quite bright, as she makes God’s name famous within the realm of the more traditional worship genre- without resorting to repetitive lyrics and musical sameness, which is what we hear a lot of on Christian radio, sad to say. In my opinion Forever Amen is a breath of fresh air in an industry where worship music unfortunately sounds very, very similar- and Steffany is sure to create waves, as she ushers in a new generation of worship leaders who aren’t afraid to break down the walls of what worship music should sound like.

Originally an interlude on Blackout led by keys and having Steffany ardently proclaiming that all she’s made to do on this earth is to give God glory and praise, to forever say ‘amen’; the title track from this project is an extension of that spontaneous worship piece from Blackout. As Jason Ingram helps Steffany write the verses, we are presented with a divine revelation, as well as a vulnerable and honest admission and declaration, that all we can do is to thank God for His presence, out of gratitude and thanks. Another personal album highlight is the album opener “Remember”, co-written with Matt Maher and actually playing out like a Matt Maher song. Though musically subdued in nature and only comprising of a piano, this song is nonetheless somewhat radio friendly, as Steffany eloquently reiterates her love for Jesus and that it is because of His great sacrifice for us and His resurrection, that she will remember his love and devotion for each of us and for all of us.

The rest of this long-ish EP/short-ish album provides us with moments of unbridled and compelling praise to our Father and Saviour. “More To Me”, sung with Chandler Moore, is a reflective, intimate piano led track that prayerfully lays out the ever true fact that Jesus means more to Steffany, and also more to each of us, than we could ever know; while “No One Ever Cared For Me Like Jesus” is another slower tempo piano led ballad, as Steffany honestly and with intent reminds us of the love of Jesus, letting us know that no one else on earth has ever cared for her and ever loved her live Jesus has and is. With the exquisite, transfixing and enthralling strings led instrumental piece “The Olive Grove” possibly reminding us how Jesus felt at the Garden of Gethsemane when he prayed to God; the subtle yet stirring “The Center Of All History” is a beautiful duet with Matt Maher, as Steffany eloquently reminds us that Jesus Christ’s death and resurrection underpins the centre of all history, and thus with this fresh revelation, we can praise Him with no limits and no fear.

Also led by impressive keys, “This Close” is another duet with Chandler, as Steffany majestically imparts to us that she can rest in the promises and faithfulness of God especially when she knows for a fact that He is extremely close to her at all times. While Steffany employs her daughter Wonder Grace as well as Amanda Cook as guest vocals for the powerful and explosive “Christ The Lord Is With Me” (by far the most upbeat song on the album, and a potential modern day hymn!); Forever Amen ends with the electronic slow ballad “Great Assembly”, which is worship at its most vulnerable and personal, with Steffany passionately and ardently relaying to us that ‘…we long, we long, we long for You and no one else could satisfy us like You do, Jesus…’.

Forever Amen by Steffany Gretzinger is a hidden gem, an album you never knew you needed or wanted until you have listened to these resounding worship anthems. Even though on the surface these are just songs with the piano, these songs are nevertheless impacting and timely, for such a time as this where we’re all isolated from each other. We may not feel like praising God with gresat passion or big booming instruments- and that’s where this album comes in as it meets us where we’re at right now. With plenty of standouts here, including personal favourites “Remember”, “Center Of All History”, “Great Assembly” and the emphatic title track; sky’s the limit here for Steffany, as she continues making music on her own. As we marvel at what God has done in her life and what she has conveyed to us here in this 9 track near-flawless masterpiece; let us press repeat and listen again to what God is saying through her music…at least until the next studio album- and even then this album should be on repeat as well!

3 songs to listen to: Forever Amen, Center Of All History, Great Assembly