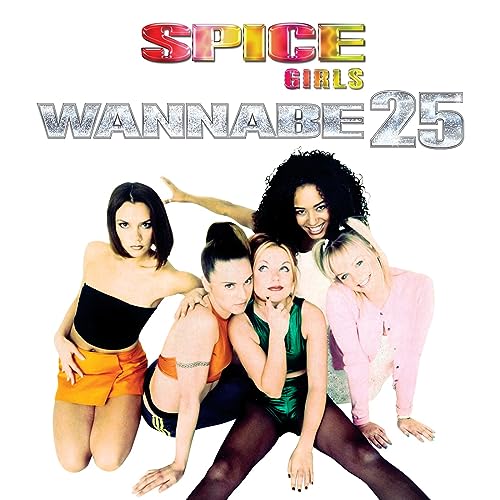 One of the most popular and influential girl groups of the 90’s (and I guess of all time!), Spice Girls may have only release 3 albums in the late 90’s, and they may have been on hiatus for over 20 years. But that hasn’t stopped the world for wanting them to reunite for a new album or at least a new single every time they do a ‘comeback’ tour. The girls (Mel B, Mel C, Emma, Geri and Victoria) have embarked upon many reunited concerts, the most recent being in 2019, before COVID-19 derailed plans for new music of some shape and form; and while you all can read about the girls in my blog about them which I posted around a few months ago, the truth is that we all are wondering when the girls are releasing something new. And though the answer still is not yet, we’re given something to whet our appetites in the meantime. The girls recently unveiled their latest EP Wannabe 25, comprising of the original 25-year-old smash hit single, a demo version, a remix version and an all-new track; and though it’s not the same as a new album, let us grab what we can get, don’t you think?

The question arose while I was listening to this EP- why are we listening to “Wannabe” all these years later. Then it dawned on me. It’s because we can identify with these ‘real’ superstars. Not that any other celebrity these days aren’t attainable, it’s just that for young women especially in the 90’s, the Spice Girls represented a brand of woman that was simply much easier to aspire to be like. You know how you had your role models when you were younger and you always looked up to them, but then you’d be disappointed if one of them failed or committed the unforgiveable sin? I wasn’t a fan of Spice Girls back in the day, nor am I an avid fan right now (I can appreciate their music objectively though!), but what I have gathered from reading and researching, was that Spice Girls were unashamed, unapologetic, and always owned up to their mistakes. They didn’t pretend to be perfect, and they challenged the status quo. They were all for friendship and sisterhood and always having each other’s backs; and when they went on hiatus, they always supported each other’s solo careers.

“Wannabe” is the group’s most popular and respected single, and champions the value of female friendships over romantic bonds with the opposite sex. Still to this day, the track has never gone out of style, and has since been described by a 2014 study by the University of Amsterdam and Manchester’s Museum of Science and Industry as being the catchiest song of all time. The topic of friends over romantic partners is actually quite universal and timeless, and the fact that there’s a pretty catchy and visually photogenic music video filmed as well, doesn’t do any harm to the song at all. Although a deeper analysis of the lyrics in the bridge reveal a dirtier meaning to the song– but the track and music video has gone viral, and into the ears and hearts and minds of listeners of all ages… so, shall we choose to view the song as more innocent than it was intended to be? This EP also includes a grunge/rock type demo version of the song (that sounds a lot more 80’s sounding!), as well as a 6-minute remix single version of the track- a version that I firmly believe is way too long, but moving and impacting nonetheless. But the shining light on this EP is the never-before-heard original melody “Feed Your Love”, a slower paced reflective and contemplative ballad. Standing tall at 5 minutes, the girls majestically sing together in harmony- and sing about their love for a guy, asking him to ‘…feed your love to me, promise you can keep it, I’ll be good to you, ’cause I need to know that you care, feed your love to me, ‘cause I really, really, really wanna share my secrets with you…’; as we are presented with an honest, vulnerable track about sharing your soul and your entire being with someone special. Being honest and real with someone is scary, and this song encourages us to find that special someone and be active about making them a greater part of your lives.

Again, Spice Girls need no introduction. Mel B, Mel C, Geri, Emma and Victoria have redefined a whole landscape of pop and girl bands to an enormous extent- and the fact that we’re all singing “Wannabe” all these years later speaks volumes. Their last album was in 2000… but it’s clear the fans want to see the group back for an extended period of time- and I for one would be very intrigued to hear what a new Spice Girls album would sound like in this day and age. Spice Girls have been synonymous over the years with changing the landscape of 90’s pop and singing about a wide variety of topics- and as they revealed to us their very real songs and their attainable lifestyles and their relatable character and affable personalities; these were girls that you’d want your daughters or sisters looking up to. Are they still role models even now? Yes, I’d say that they are. So as we are all stuck at home, longing to be back to normal; let us look to Sporty Spice, Scary Spice, Baby Spice, Posh Spice and Ginger Spice for encouragement and inspiration, and reassurance that things will be ok. And let’s jam out to this EP. It’s a great reminder that the 90’s had some seriously great music! And let’s all pray an album releases next year! Any album, I’d take it. Yes, even a Christmas one!

3 songs to listen to: Wannabe, Wannabe (Demo), Feed Your Love