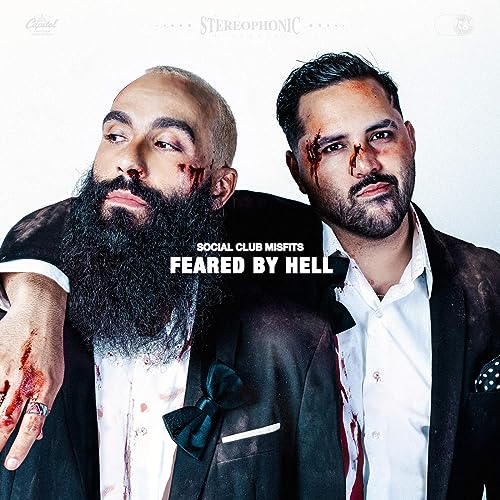 If I had to pick one artist that has had a big year over the year of 2018, in terms of their career, it’d have to be Social Club Misfits. A rap/hip-hop duo comprised of best friends Fern and Marty, these two rappers have a big heart for Jesus, and were signed to Capitol Christian Music Group around about three and a half years ago. The Misadventures Of Fern And Marty was the duo’s label debut; and released in 2017 to moderate success; yet it was only in 2018 that Into The Night propelled them to greater heights and to stardom. And while I myself haven’t been that much of an avid listener of any rap artist in general, Social Club Misfits have changed my outlook on this genre, along with artists like PEABOD, Lecrae, Group 1 Crew, KB and Andy Mineo. It’s hard not to love Fern and Marty’s music after hearing both give powerful testimonies (in separate videos!)- and I’m sure when you guys watch these videos too; you’ll be blessed! While we as a site unfortunately never reviewed Into The Night; the duo have quickly unveiled their fresh, reinvigorating and extremely poppy EP MOOD, and its companion darker and moody EP DOOM in 2019- and this batch of two EP’s which was bundled together as an album late last year won Rap Album at the Dove Awards a week or so ago. So even though now you might have expected Fern and Marty to tour this release… now it’s time to feast our eyes on the group’s next release (and it’s so soon cause of COVID-19!). Fear By Hell boasts 12 tracks, while 8 of the 12 have guest vocals. So let’s dive in to see whether there is some lyrical meat on these offerings, shall we?

The album opener, the chilled and laid back “Act Of God”, features rapper nobigdyl; and is a semi-testimony of sorts, whereby Fern and Marty both reiterate what they are where they are right now in their personal and professional lives due to an ‘act of God’- or something supernatural or divine for those of you who don’t believe. The song holds nothing back lyrically, and is the duo at their best, as they try to hammer home the gospel and the good news in a short 3 minute melody that is as intense as it is powerful and comforting. Lead single “Is that Okay?” is next, and is a predominately Marty-led song, whereby he doubles down on the some of the hangups that the Christian music industry has, declaring that he reckons that Social Club Misfits will never be famous in CCM, and he and Fern are strangely ok with that.

The rest of the album packs a punch and is one of the most musically diverse and compelling albums I’ve heard in a while. Latin and Caribbean flavoured “Conmigo” (Spanish for With Me) is a love song dedicated to the duo’s significant others, and is such a joy to dance and move to; while the highly musically frenetic “To The Top” features 1K Phew, and delves into the duo’s desire to reach the top in their influence, and be a light for Jesus in this darkened world. “God On My Side” has the duo feeling confident about success and overcoming adversity, simply because God is on their side (it’s not the most inventive song title out there!); while “Savior”, one of the most worshipful/CCM songs on the album, has Jeremy Camp on guest vocals, and Fern and Marty outlining their innate need for a Saviour to help them with every aspect of their lives.

“Luau” is one of the most nonsensical songs I’ve ever heard Social Club Misfits ever record- yet there’s still something about this song that makes it such an earworm- it’s a catchy song about having a good time and going outdoors, and boy in 2020 don’t we need songs about what used to be, am I right? “Night Glow” sadly didn’t tug at my heart, but the pseudo-title track highlights the fact that we as believers need to be the light in the darkness- to be the ‘night glow’ in places where there are none; while the potential pop radio single “Young Gunz” features DAVIES, and is one of the album standouts- a catchy song depicting the eagerness and passion and zeal every Christian should have and strive to be like.

“I Need You”, a toe-tapping, danceable pop/reggae/r&b type tune, has Fern and Marty championing their wives and declaring that they need them in their lives; while Blanca joins Fern and Marty in the heartfelt and unifying ballad “Sonmos Familia” (Spanish for We Are Family)- a melody about the fact that we as people do not need to be divided right now, that we can still have love and respect for each other as indeed we are family if we believe in the same God and the same Jesus. And as quickly as Feared By Hell starts, it ends with the worshipful “Without You”. Featuring the powerful and emotive vocals of Riley Clemmons on guest vocals, this track is the group at their most vulnerable and honest, relaying that they are lost without God, that ‘…without You, I’m just a house of cards ’bout to fall down, without You, I’m pretty sure I’d crumble right to the ground, that’s why I’m holding on so tight, ’cause You are the anchor of my life, and I’m nothing without You, I’m nothing without You…’. And as we worship God, and admit that we need Him more than we would even normally care to admit, the duo end such a compelling album, and one of the most hopeful and compelling of 2020- one that you all need to listen to, if only to be motivated and inspired only for a little bit.

Feared By Hell from Social Club Misfits is definitely something special, as it’s an album that musically is quite diverse but still like SCM- and it’s these songs, that will be on the ears and lips of listeners for a while yet- and it helps too that Fern and Marty aren’t forgetting their Christian faith and are letting us know that Jesus is still the centre of their lives. As the group have recorded 4 albums already, and have always walked the line between rap and CCM/pop; I am forever a fan of Social Club Misfits now… and that is in part thanks to Feared By Hell. So, what are you waiting for? Social Club Misfits are going to take off in ways you could maybe never imagine, so I suggest you jump on the bandwagon right now and be amazed!

3 songs to listen to: Savior, Young Gunz, Without You