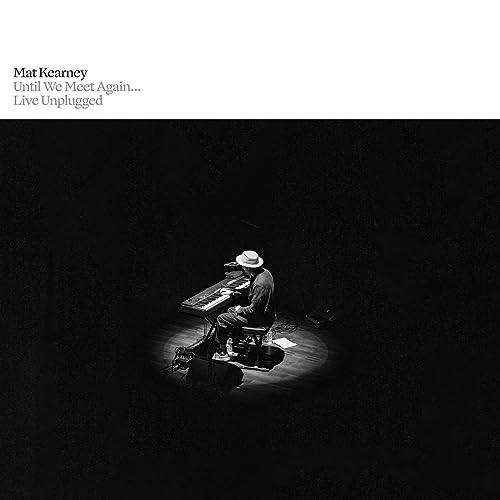 Previously signed to Republic Records and Inpop Records (although now an independent artist); singer/songwriter and pop artist Mat Kearney is one of the most underrated yet also one of the most heartfelt and hopeful artists I’ve heard recently. Though myself not being an avid fan of Mat’s, 2015’s Just Kids was an album that I thoroughly enjoyed (I reviewed the album here!); and at the time I promised to dive deep into the rest of Mat’s discography. However now here we are 5 years later, and I still haven’t had ‘time’ or maybe the inkling, to even check out Mat’s music. it’s not that his music isn’t good… it’s just that I’ve been impacted and inspired by other artists who are a lot more hard-hitting and resonating. CRAZYTALK in 2018 was an album that I was meaning to check out… but here we are 2 years later, and I still haven’t heard any of the songs in full. Is it just me or am I just wanting to like an artist that doesn’t click with me on some level for some reason (even though objectively Mat is someone who I should be finding impacting and inspiring personally!)? well I guess there’s plenty of time for me to be philosophical however with Mat just releasing a new album this past month, called Until We Meet Again… (Live Unplugged), we are met with a reintroduction of sorts to his discography, giving casual fans like myself reason to check out his music.

Mat isn’t your average household name, but as with anything this year, COVID-19 has decimated any semblance of normalcy and has made the term popularity somewhat relative. When you as an artist have no live shows to go to, how do you rebrand yourself for the foreseeable future? Well Mat has done just that for a ‘live’ album that showcases a number of his greatest hits- albeit acoustic; and has reminded us all that even music veterans can compete in a cutthroat business like this. Songs like “Ships In The Night”, “Undeniable”, the very first single “Nothing Left To Lose” and the heartfelt melody “Closer To Love” remind us how much of an intricate and meticulous songwriter Mat is, and as I seem to forget that sometimes… I reckon Until We Meet Again… (Live Unplugged) is great for all of us as we are gently reminded of the impressive musical and lyrical prowess of such a songwriter and an artist like Mat. So is this acoustic album, which dives back into Mat’s roots as a songwriter, as well as reminding us all about his personal experiences and his reflection on the past; worth the plunge if you’re not a fan already? Yes of course, this album is the perfect place to start! Then I’d say go backwards, and continue with JUST KIDS.

Presumably recorded before COVID-19 wrecked everything, or maybe recorded in an outdoor concert or an indoor socially distant concert; Mat has presented to us 11 songs of hope, joy, positivity and just sheer musical and lyrical brilliance. With live albums, it’s a tricky thing as you’re trying to emulate the studio sound and the studio atmosphere. Yet Mat has captured his studio essence beautifully… and this time this album does more than enough for me to want to check out his music. ask me again in 2-3 years- and I guarantee it that I’ll be so well versed in Mat Kearney songs that I could just be a fan in 2-3 years. not right now though…but this project gives us all a glimpse into who we’ve all been sleeping on. And the answer is a musical and lyrical genius. Sure, I’m not that connected to all of the songs (I’m more resonating with “Air I Breathe”, “Closer To Love”, “Ships In the Night” and “Nothing Left To Lose”); but there more and more I listen, the more and more I’m allowing myself to be ministered to Mat’s music, regardless of my previous enjoyment of these songs.

It’s time for me to listen to some Mat Kearney albums I reckon! Though apprehensive at the beginning, as I knew that Mat was a mainstream artist (and now that preconception of Christian music being better than mainstream has been turned on its head because of the blog series that I now am in the middle of writing and am now realising has been a factor in removing some of the assumptions about music that I might have had!); I soldiered on back in 2015, and found some gems and treasures in unexpected places. To tell you the truth, I forgot about Matt and his music in the next 5 years, but now I’ve come to realise that Mat truly is a gifted singer and songwriter, and in a number of tracks in his discography; he alludes to a part of his walk with God, without referring to God or Jesus by name, and that is quite clever given that his ministry is to ‘evangelise’ and share his story with the wider community, not just to Christians. Sort of like what needtobreathe, Switchfoot, Skillet and Owl City are doing; Mat gives us albums full of heart, soul and passion, and double meanings in almost every song. And yes if you’re not a fan of Mat’s, then Until We Meet Again… (Live Unplugged) is a great place to start. Even if you are a fan of Mat’s then Until We Meet Again… (Live Unplugged) is still a great place to continue. Well worth the listen, you could not go wrong with Mat’s work, and this album is sure to bring a smile to your face when you listen!

3 songs to listen to: Closer To Love, Air I Breathe, Ships In The Night