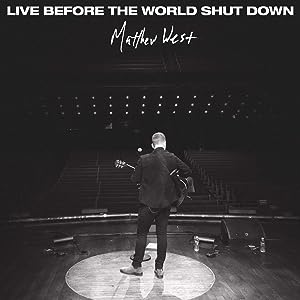 Matthew West, dare I say it, is perhaps the closest there is to a modern day version of Steven Curtis Chapman. That’s my opinion- others may disagree, and that’s fine. But for me, ever since Matthew has undertaken what I reckon is one of the most selfless acts in CCM- writing music not based on your own experience but based upon others- fans to be exact; I’ve had much more admiration and respect for what he’s doing, something that I reckon the CCM community of music should decide to invest in moving forward- writing songs, not just on the experiences of the writer (that can happen too), but rather, place their own feelings and what they could think, in someone else’s head for a moment, and write from their point of view. For if that were to happen, there’d me much more humility, and less rash judgements- and where I see the most judgements from is yes, the CCM community. So for Matthew to write not for himself but for others is refreshing to see. He’s built most of his career- 2010 onward, on this structure, and as he’s entering his new season on Provident Label Group, Matthew unveiled to the world his latest collection of songs in an album bundle called Brand New, released digitally in February 2020. As Matthew continued to deliver poignant songs and melodies- presenting them in a way that humanises the stories sung through song, we see a plethora of them impacting millions of people around the world with standout songs over the last few years being that of ‘All In’, ‘Broken Things’, ‘Day One’, ‘Mended’, ‘Grace Wins’, and recently as of last year, ‘The God Who Stays’. Now a veteran and mainstay in CCM, Matthew’s at it again- after his surprise single ‘Take Heart’ unveiled to us under the strict guidelines of social distancing and quarantining protocols because of this horrific COVID-19 pandemic, Matthew has yet again given to us another set of songs, this time an EP titled Live Before the World Shut Down (EP).

Yes, you guessed it, this new album from Matthew is one such set of recordings that was created before the whole world was altered by COVID-19. And while if COVID-19 wasn’t a thing, then this album probably wouldn’t have happened, what I’ve realised through this COVID-19 period of time that we have been in for the majority of 2020, is that a lot of music unveiled and released during at time period has been more meaningful, heartfelt, personal, purposeful, emotionally charged, challenging and poignant, maybe even more so than albums prior to COVID-19…and Matthew’s new 6 song EP is also no exception. Recorded in an acoustic manner throughout a variety of shows prior to live shows being shut down in America (and around the world) from March 2020 onward, Matthew unveiled his 6 song EP, to much anticipation and expectation, as we as fans of not only Matthew but of music, hear songs in a live format, even if live music is being halted as of right now. ‘Without You’, an obscure song from Brand New (not a radio single, and not really a standout song on Brand New either- from hearing Brand New from start to finish), starts off the live acoustic EP, as Matthew speaks about our innate nature to always connect and be in community, and as the song suggests, ‘there’s no me without you’- the understanding that we are not who we are without Christ in us and beside us; while ‘Hope Returns’, a recent favourite of mine from Brand New, is also present here on this 2020 acoustic live EP, and relays to the theme of the elusive word ‘hope’ and really unpacks what the word means for people in different circumstances. Hope is a word where we wish for things to be true and we long for things to become a reality- a concept that only is made tangible through God incarnate Jesus- that our hope solidifies when we fully grasp Jesus overcoming death and the grave on the cross all those years ago.

‘Love On the Radio’, an autobiographical song of sorts, states as to why Matthew is still involved in Christian music and singing about Christ all this time, and is also here on Live Before the World Shut Down (EP). Matthew reminds us all that he can only sing about what he believes in, and that is the changing power of God’s love in people’s lives. Yes, I’m sure Matthew would’ve reached more people if he did sing in the mainstream industry, and did go the route of Switchfoot, needtobreathe and Skillet, but Matthew is called to the Christian industry, and there’s nothing wrong with that. Matthew has also recorded his own rendition of Casting Crowns’s ‘Nobody’, a song that he actually co-wrote and was featured as a guest vocalist on Casting Crowns’s own recording of the song way back in 2018. Fast forward a couple of years, and Matthew’s rendition of the song, albeit a live recording and not a studio one, ends up here on this live acoustic EP, and is a welcomed surprise and a great addition to this already emotive and compelling EP, full of moments of heartfelt praise and others of quiet intropection and reflection. A song that has reminded me that God even chooses nobodies like us, to bring God’s love to a hurting and dying world; ‘Nobody’- Matthew West’s version, has quietly usurped Casting Crown’s as my favourite rendition of an already impactful and emotive song, one that has actually been a great standout on Casting Crowns’s 2018 album Only Jesus, and is a standout here on Live Before the World Shut Down (EP).

Some of my favourite songs from Matthew ever are both ‘Truth Be Told’ and ‘The God Who Stays’, both present here on this acoustic live EP. What these two songs have accomplished, is to dig deep within the human soul and remind us all of our incredible need to be honest with each other, even if it means for us to hurt a little. ‘Truth Be Told’ is a sobering account, asking the reason why we say that we’re ‘fine’ to everyone we meet, even if we’re not. In Matthew’s own words in a post on Instagram, we see that ‘…this song is an honest attempt by me to be, well, honest. Authenticity is easier said than lived. I think deep down we all like the idea of showing who we really are, warts and all, to the world. But allowing others to see the rough-around-our-edges, is a scary thing. What will people think? How will they judge me when they know I’m anything but perfect? The crazy thing is, the truth is already told when it comes to God. Scripture says nothing in our lives is hidden from Him. For someone who hasn’t discovered the freedom of grace, the thought of a God knowing about the worst parts of your life can really freak you out. But to understand that there is a God that sees every secret sin, every struggle, every thought, every mistake, and loves you still- that is a freedom like no other…’ The song is a reminder for myself to be as authentic and honest in how I live my life, as I can, because in being vulnerable and allowing the truth to come to the surface, it is in turn allowing us to dare to believe that there’s a God big enough, strong enough, and loving enough, to welcome us towards Himself regardless of whatever we confess about ourselves we so desperately want to hide; and that there’s people around us willing to just listen and love us without condition or expectation, as Jesus loves humanity, full stop. ‘The God Who Saves’, a song that was released as a radio single (and the first official single to Brand New) in July 2019, this acoustical version presented as the final track to this EP, gives more rise and pertinence to the lyrics of the song, with string instruments and light percussion being the musical backdrop for this already moving and impactful track. ‘The God Who Stays’ itself is one that is as vulnerable as they come- we are reminded that even if everyone else walks away from our circumstances we are in, God never does- He still stays. He may not change what is going to happen, or He may not heal a broken ___, whatever the reason; but He does stay with us; and walks with us through whatever we’re facing. Just because God doesn’t fix the problem doesn’t mean He doesn’t love us- He just may know more about the whole big picture than we know at the moment, and maybe, just maybe, what we’re going through, no matter how dark it may be, will allow us to have a greater more humble spirit at the end of it all. We may become more resilient, care about people more, rely more on God for things, and just be a better person, because of hardship. Sure, God does take things away, and He does heal people. But even if He doesn’t, He is still worthy of our praise and affection. Though the problem may stay, that doesn’t mean He has gone- He’s right there, we maybe are just too focused on the here and now to see it!

Matthew’s discography is a wide one, and with many songs that have climbed up the radio charts over the years, his presence in CCM shouldn’t be ignored or even bypassed in favour of other ‘more famous’ CCM artists, like TobyMac, Chris Tomlin, Francesca Battistelli, Newsboys, and the like. Yes, Matthew doesn’t have that much traction or even a following as opposed that all these other aforementioned artists, and that’s ok. His discography speaks for itself. And his new 2020 album Brand New, alongside his standalone single ‘Take Heart’, as well as this new acoustic live EP, are steady and firm reminders of a constant worker in an industry that often overlooks the artist that grinds tirelessly, like Matthew, in favour of someone flamboyant and impactful from the get-go, but after an impressive debut, may not be in the spotlight anymore, for whatever reason- artists like Everfound and About a Mile come to mind, who had impressive debuts, but nothing much else. Nevertheless, Matthew’s influence in an industry that is seemingly tired is indeed there; and his songs on his latest album are some of the most hard-hitting I’ve heard in a while- songs like ‘The God Who Stays’, ‘Truth Be Told’ and ‘Love on the Radio’ come to mind. He is a reliable and gifted songwriter, and yes, by all means, a definite contender to be a modern-day SCC (Steven Curtis Chapman). An EP that’ll continue to be on my Spotify playlist for weeks and months to come; Matthew ought to be commended for the curation of the EP, an EP that’ll certainly be loved and appreciated if you enjoy similar-sounding artists like Tauren Wells, Rascal Flatts, or the ever-reliable and recently disbanding band, Tenth Avenue North. Kudos to Matthew for such a vulnerable 6-track EP, one that’ll be one of my favourite EP’s of 2020 when the year ends!

3 songs to listen to: Nobody, Hope Returns, The God Who Stays