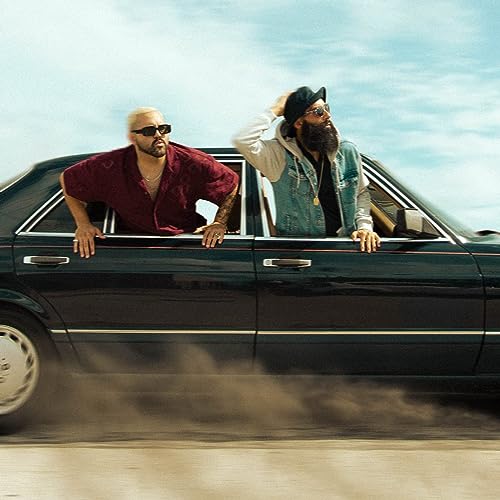 If I had to pick one artist that has exponentially made it ‘big’ over the past few years, in terms of their career… well, it’d be close. I could pick Anne Wilson or Russell Dickerson or Maverick City Music. Or even Olivia Rodrigo. But in my mind though, it’d have to be Social Club Misfits. A rap/hip-hop duo comprised of best friends Fern and Marty, these two rappers have a big heart for Jesus, and were signed to Capitol Christian Music Group around about five years ago. The Misadventures Of Fern And Marty was the duo’s label debut- which released in 2017 to moderate success; yet it was only in 2018 that Into The Night propelled them to greater heights and to stardom. And while I myself haven’t been that much of an avid listener of any rap artist in general, Social Club Misfits have changed my outlook on this genre, along with artists like PEABOD, Lecrae, KJ-52, Hulvey, Trip Lee, KB, Steven Malcolm, and Andy Mineo. It’s hard not to love Fern and Marty’s music after hearing both give powerful testimonies (in the videos here and here)- and I’m sure when you guys watch these videos too; you’ll be blessed! While we as a site unfortunately never reviewed Into The Night; the duo unveiled their fresh, reinvigorating and extremely poppy EP MOOD, and its companion darker and moody EP DOOM in 2019- and this batch of two EP’s, which was bundled together as an album late in 2019; won Rap Album at the Dove Awards in 2020. So even though now you might have expected Fern and Marty to tour this release… this didn’t happen, because in October 2020, the new album Feared By Hell released. And yes, it’s so soon cause of COVID-19! Fear By Hell boasts 12 tracks, while 8 of the 12 have guest vocals- and yes, this means that the group has dropped 4 albums in 4 years (1 album each in 2017, 2018, 2019 and 2020!). And while we have reviewed Feared By Hell here, the duo have since released Feared By Hell (Reanimation) (also reviewed on this site). It’s a remix EP that reimagines some of their songs from Feared By Hell in a new light. And so as you all can read all of our reviews about Social Club Misfits at your own pace… now’s the time to examine a brand new album from the band! Everybody Loves A Comeback Story dropped to stores last month; and as I’m a fan of these two… it’s a no-brainer for me to voice my thoughts!

The definition of a ‘comeback story’, I guess in accordance with the world and layman’s terms, is that it describes the story of a come-from-behind-‘win’ (in sports, in music, in life, in popular culture), so big that it enters folklore. And so, by Social Club Misfits calling their album by the name Everybody Loves A Comeback Story, we are presented with an album where the underdog and the person or ‘team’ we root for is the one that isn’t the most popular nor the most known. And thus, could SCM be describing their new album as one of being a comeback story? Album opener “I Can’t Fail” features the duo passionately and ardently singing about the fact that they cannot fail with Jesus on their side, and as Fern and Marty vibrantly and eclectically outline about the fact that their experiences over the past few years lay testament to the Lord’s favour and providence in their lives, we are encouraged and inspired to put Jesus first in our lives and to stay faithful where we are at. With our friends by our side and with God firmly at the forefront, how can we fail at anything we do? “Again”, featuring Jon Keith on guest vocals, is a track about the faithfulness of God, and about the fact that Fern and Marty can be successful yet again because they’ve done it and been popular and influential before in the past with God’s help; while the anthemic rousing and celebratory pop/rap melody and lead single “Who That Is” features DJ Laz, and speaks about being secure in your identity as a person and being unashamed of who you are, just like how Fern and Marty are unapologetic for who they are and aren’t afraid to let the world know through this track.

The rest of the album has the duo celebrating their identity in Christ and speaking about being unashamed about being a Christian in this world. “Unstoppable” with Ryan Ellis, is a pop song that outlines that we as believers are unstoppable with Jesus Christ on our side; while “The One Out The Friendzone” features Tommy Royale, and is a ‘mainstream’ style pop song where the duo through the persona in the song beg an unnamed female to consider either one of them as dating material- especially since the persona outlined their romantic love for her. A track that isn’t a ‘Christian’ song but a song nonetheless about being godly men and praying for God to direct them to that special someone who is made specifically for them; Fern and Marty sing about an age-old topic- of being godly men and trying to conquer the friendzone- and praying for God to show them a godly woman and someone who wants to be in a long-standing relationship.

“Rendezvous”, with Torey D’Shaun, speaks about God showing up and Fern and Marty’s lives time and time and time again- the duo giving glory to God and wanting to have quiet time with Him (a rendezvous!); while the CCM pop single “Got What You Need” features Jordan Feliz on guest vocals and highlights the fact that the persona has promised another person that he is the one that they need- that he can be that shoulder that the other person cries on, or that listening ear that doesn’t judge. And with Fern and Marty actually attempting to sing on these verses, the power pop anthem is a personal highlight, as we are encouraged to be the hands and feet of Jesus and draw Jesus to others by our relationships with those around us. The EDM style rap/grunge melody “Welcome To The Club” speaks about how it seems to be ‘uncool’ right now to be considered a Christian, but Fern and Marty outline how they don’t care that they’re seemingly outcasts by the world’s standards- because the ‘Christian’ club is all the more fulfilling. While “Human”, a pop song that is by far my most enjoyable song on the album, features Zach Paradis on guest vocals, and speaks about anxiety and mental health and reaching out to friends, family and God when you are struggling, with the artists singing out that ‘…I’m sitting here wishing You nothing but, nothing but, nothing but love, we all stumbling, struggling, wondering but I know that we ain’t lost, I keep falling making mistakes, but I am learning more every day, how to love like You, just trying to be more human…’.

“Born For This”, with gospel artist Evvie McKinney, speaks about the tension CCM musicians have between glorifying God and becoming famous in order to have a better life than they have right now. It’s in this tension where the song lives, with the artists outlining that it’s easy to be lost in the fame of it all, so you need to know what grounds you and what you are willing to do to get what you want and where you want to be. The penultimate track on Everybody Loves A Comeback Story is the semi-worshipful “Sunday Service”, where the duo give thanks to God for all that’s he’s done while also imparting wisdom and knowledge and insight to the next generation- sort of like a graduation speech; while “Don’t Leave I’m Sorry” rounds out proceedings- a testimony type track once again about God’s faithfulness, and a melody that also highlights the determination, grit and passion these guys have for their craft.

Feared By Hell from Social Club Misfits is definitely something special, as it’s an album that musically is quite diverse but still like SCM- and it’s these songs, that will be on the ears and lips of listeners for a while yet- and it helps too that Fern and Marty aren’t forgetting their Christian faith and are letting us know that Jesus is still the centre of their lives. Fast forward to now, and the same can absolutely be said about Everybody Loves A Comeback Story. As the group have recorded 5 albums already, and have always walked the line between rap and CCM/pop; I am forever a fan of Social Club Misfits now… and that is in part thanks to Feared By Hell– but more-so with this latest album. So, what are you waiting for? Social Club Misfits are going to take off in ways you could maybe never imagine, so I suggest you jump on the bandwagon right now and be amazed!

3 songs to listen to: Unstoppable, Human, Born For This