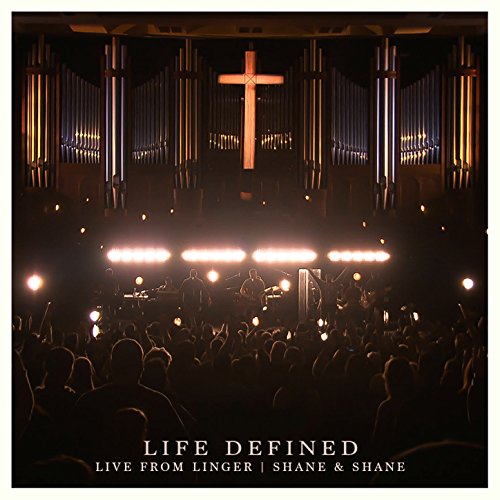 Shane and Shane have made a name for themselves over the years, since 2014 onward as they launched the Worship Initiative Website, online toolkit and worship resource program alongside various albums of cover worship songs (songs that are popular in churches around the world) that have released at periodic times throughout the last few years. Often at times Shane and Shane record the worship songs in a much better structure and atmosphere compared to the original recordings…and that is ok. Shane Bernard and Shane Everett; both of whom make up this duo, have unveiled their first project that is not titled The Worship Initiative, along with it not being a studio project either- this three-song collection is as live as they come. Handy too, considering to worship alongside a live track can be very interesting and different when worshipping against the backdrop of studio instruments…dare I say that often at times the live setting allows people to freely worship, knowing the song itself isn’t as structured or even- which is good, as it allows us to worship without much set times and formula (that often happens in studio tracks)? These three songs (one of which is a Phil Wickham cover) have come out of nowhere to challenge my own thinking of what it means to sing in times of free worship and to admire the spoken word section of Life Defined, recorded and spoken by Davy Flowers, who is an up and coming artist in the CCM industry!

Released as a corresponding video as well, this continuously flowing 3 track EP is as very much necessary as it is fun-filled. “Life Defined”, written by both Shane’s, travels along the theme and message that our lives and how we allow the Lord to work through them to bring about his glory and our good, show people around us (and us as well), how well we truly understand the gospel…or even whether we really grasped the enormity of it at all. ‘Life Defined’ feels like a song I’ve heard before, yet even so, I haven’t. The melodies are a tad familiar, but all in all, the Shane’s have delivered a track that is confronting as well as encouraging. How are our lives defined at the moment- from birth til now? How are we living? To show others the love that we have freely received? These are the connotations that can be seen from the music and lyrics of ‘Life Defined’, as we reflect on what Shane Everett and Shane Barnard have conveyed to us in a song that I reckon is one of the most underrated in 2018 thus far. The Shanes also segue into Phil Wickham’s ‘Doxology/Amen’, done with tremendous justice as the Shane’s portray a cover that is even as enthusiastic as the original. Ending this timely and powerfully sound, yet albeit short, with a spoken word section delivered by Davy Flowers, we are given a lot of reasons to celebrate spoken words (because hardly anyone records them in the CCM/worship industry anymore). So therefore, whenever anyone releases a spoken word, we sit to take notice. And take notice we did. Here’s a snapshot of the spoken word:

Praise Him, praise Him for the cosmos,

And the picture that it paints of an artist so brilliant He can scarcely be defined;

Praise Him, for the first time that you pause, to notice the open sky and wondered

What kind of imagination could inspire such beautiful things from scratch?

Praise Him, for the scratch

For dust held in the hands of a master craftsman, unafraid to share His lightness with those He knew

Would break His heart and test His patience, and try His love, praise Him

For the borrowed breath that You breathe, and faculties that function,

So as to remind you that you are not your own, for a love that finds its way to you

In every season, letting you know that you are not alone, praise Him

Remembering, never to forget all of His benefits, too numerous to be calculated,

Too heavy to be weighed on scales, too astronomical to be quantified, praise Him

For the miracles your eyes have seen, that you are too hard-hearted to believe,

Too near-sighted to perceive and too self-sufficient to receive, and still somehow,

He met all of Your needs, praise Him…

That stanza above is only a transcript verbatim of about a minute of a four-minute spoken word session by Davy Flowers. That spoken word ‘song’ and that ‘song’ alone ought to be enough to check out this EP, even if we may not have heard the Shanes sing in a live setting in a while. And there after three songs, we see the end of Life Defined. May have I wanted the track listing to increase a little? Probably. But nevertheless, these three songs are impacting and encouraging, and a must-have if you enjoy similar artists like Big Daddy Weave, Aaron Shust and Jesus Culture. The Shanes, alongside Davy Flowers, have recorded a live project that hopefully is as poignant and emotive compared to various live albums from various artists in years gone by. Who knows, hopefully the title track could be in Sunday setlists for Sunday services in months and years to come! Well done Shane Everett and Shane Barnard for these songs, can’t wait til more original material in the upcoming months ahead!