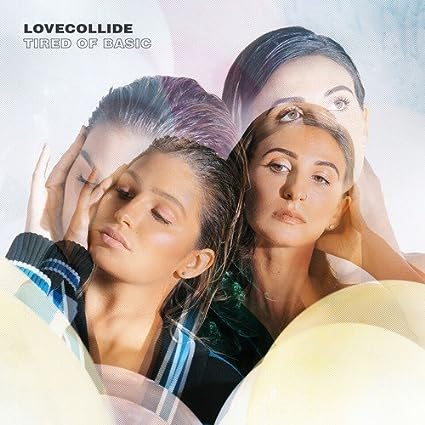 Probably one of the most underrated bands currently active right now within the Christian music industry is LOVECOLLIDE. Not because they are independent, but rather I don’t reckon people have heard of their music even now, a few years after their self-titled debut album way back in 2014. And that’s kinda sad, because I think that this duo, consisting of sisters Brooke DeLeary and Lauren Budnick are some of the most passionate, enthusiastic and heartfelt duos I’ve come to listen in a long time. Whether it be husband-wife duos, sibling duos or just duos consisting of friends, LOVECOLLIDE have stood out, not necessarily intentionally, but stood out nonetheless. Sure, they can seem on the surface like any other CCM female fronted band (sort of similar stylistically to 1GN, Britt Nicole or the now disbanded BarlowGirl), but in essence, both Brooke and Lauren have created a space which is LOVECOLLIDE where they have, in my opinion, crafted some of the most underrated acoustic-pop songs I’ve heard in quite some time. Maybe years. Since delivering their sonically, stylistically and musically unique self-titled album in 2014, as well as dropping a surprise EP in 2016 (which was going to be 1 of 2 that were to have released that year, except A Spark into a Flame hasn’t released as of yet…), alongside releasing other surprise singles ‘IBIL’, ‘I Don’t Want It’, ‘Wildfire’ and ‘Breaking My Heart’ at various points during 2017; we are now met with their 3rd album release in Tired of Basic, a collection of 10 songs (4 of which we have heard already throughout 2017) where both Brooke and Lauren allow us to venture into a space where we don’t have to be basic, but rather extraordinary, what God intended for us all along!

‘…we are aliens in this world and live by heaven’s rules. We are all equal and united in Christ; not defined by labels. We are tired of basic – it’s time to break out of the boxes created by culture. Let’s be the weirdos God called us to be and prove to the world that we are not extinct. Ordinary people do extraordinary things because we serve an extraordinary God. Let’s stir things up and fight for revival. This is the rebelution. Will you join us? …’ This above quote was taken from their bio page on the band’s website, and if you will, this is, in a nutshell, what the theme of Tired of Basic is about. ‘IBIL’, the first single that was released September last year, a first of four singles released throughout that September – December time; is sure to bring up some nostalgia for many fans of BarlowGirl, as we are given a song that could’ve easily been sung by the Fervent Records band back in the day and would’ve fit right in. Standing at a tad under 3 minutes, ‘IBIL’ is the most ‘rock’ song the duo have created. And while it is a big departure from their acoustic pop anthems that we’ve heard in the past, this song is welcomed by myself and I’m sure whoever hears it. And the message? Both Brooke and Lauren powerfully declare the reason we ought to have for shouting and declaring God’s name to everyone we meet. Maybe not literally shouting and screaming at people, of course if the situation is weird, or awkward, it’d probably be better if we just stay silent at that moment…but I guess what the song is reminding us all of, is that the Christian life is a lifestyle, being a Christian should encompass our whole lives, not just the times when it’s on a Sunday morning. ‘IBIL’ is an anthem, to live our lives fully for the One who gave us His life, that what we say and our declarations will only mean something if people see us live out a life that is different and changed, as we’re reminded that it is only when we show people that we are who we say we are then they will start to take notice.

‘I Don’t Want It’, ‘Wildfire’ and ‘Breaking My Heart’ are the three remaining songs that have been released prior to Tired of Basic. And each of them, unique in their own way musically, string together a theme that can be seen throughout all the 10 songs on the album. ‘Wildfire’ teaches us to burn bright for Christ in the darkest moments…especially those, as we’re born to declare, alongside the band, that ‘…we’re gonna fan the flame, spreading the love, speaking his name, faith ignite and our hearts unite, God is alive, we’re burning brighter like a wildfire…’, while a song like ‘Breaking My Heart’ is a song that is sung from the perspective of the Lord, and how what we do or don’t do, what we say and how we just are, often breaks the heart of the Lord, because just like how a father wants the best for his children, and his heart aches every time his children stray, that is how the Lord feels every time we lose our way, when we believe what is around us instead of fixing our eyes on Him. ‘I Don’t Want It’, the last remaining pre-release song that was made available in December of 2017, has been a standout of LOVECOLLIDE’s since the release. By far one of their most personal songs that the band has ever released, we are reminded through this track of the simple truth- that if God isn’t in something, then we shouldn’t really be doing it. If we believe that God is indeed not in a situation we want to be in, then we don’t want to be there also. That if all we’re doing is just striving ourselves, then it’s undertaken just by human hands, and God isn’t in it. And if so, we might as well not be in such a situation also. God knows us and knows our needs. He wants us to thrive, yet still wants us to fulfill whatever He has called us to undertake too. ‘I Don’t Want It’ is a statement of contentment, of knowing and trusting that Christ has it all planned out, and that if a situation is leading us away from the Father, and is altering our relationship with God in any way, then we are to just realign and refocus, to hopefully allow the Lord to rearrange our own hearts as we seek His face and long for the things that are on His heart also!

The remaining songs on the album (all of which released when the official album dropped last week Friday) are all powerful and sonically unique as both Brooke and Lauren pack an emotional and musically ingenious punch into each of the 6 songs, layering them with different musical moments as we are taken on a journey to find that each song is different from the other. ‘Awake’, album opener, is a declaratory EDM inspired song that wants us all to live like we’re awake, to live as though we have been changed fully by the gospel from the inside out, all the while giving to us strong percussion and electronic looping beats; while ‘Undeniable’ harkens back to the musical nostalgia of the 1980s and 1990s as electronic sounds resemblant of that era litter throughout a song that allows us to consider the fact that our God is undeniable, when we consider all of creation and His promises to us. ‘Maybe’, quite possibly the most vulnerable and emotional song on the album, allows us to be invited into a raw and introspective look into the questioning process with the Lord, understanding that often the questions towards God during the difficult times are ones of wondering why rather than just trusting and accepting…which is ok. We can have questions, and ‘Maybe’ allows us to dialogue that through. ‘Take Me On’ presents to us connotations of sports like boxing or anything to do with fighting, as we are met with a theme of us fighting for things, alluding to the story of how Jacob wrestled with God in circumstances that required him to take a step of faith; while ‘So What’ is a song full of purpose and boldness as both Lauren and Brooke relay the theme of standing out, that we don’t have to fit into what everyone else says or does. The album itself finishes with ‘X-Ordinary’ in a celebratory fashion, as we collectively declare that we were made to be extraordinary instead of travelling through the mundane.

‘…we like to think outside the box and challenge others not to live the basic life, but to step out into the unknown and live out the life that God has called them to…we’ve always wanted to be current. It’s always been a journey for us, and always will be. I think our biggest goal with this new music and this new album was to create something that truly sounded like what we listen to on a daily basis, and what gets us going, and that’s dancy pop…we want our music to be an experience, not just something to listen to. We want the vibe, the style, the feels we give people and the love they receive to be something they remember, something that changes them…’ And it is in this light where we see the quotes above where the band unveil their heart for the album, that we can truly appreciate Tired of Basic, for what it is- a great independent pop album that is by far one of my favourites of 2018 at the moment (alongside other pop-orientated albums like Hawk Nelson’s Miracles, Michael W. Smith’s A Million Lights, I AM THEY’s Trial and Triumph, as well as For All Seasons’ Clarity). Brooke DeLeary and Lauren Budnick have delivered 10 songs full of life and power, of hope and clarity, of encouragement and at times confrontation (but that’s ok), as we are invited into a space where we can reflect on how we can live a life that isn’t basic by any means, but what the Lord has intended for us from the beginning. And with that- what are we waiting for? Stop right now and listen to LOVECOLLIDE’s Tired of Basic on any digital platform you desire, and enjoy what I reckon will become one of the driving forces of great pop-CCM music in months and even years to come!

3 songs to listen to: I Don’t Want It, Wildfire, X-Ordinary