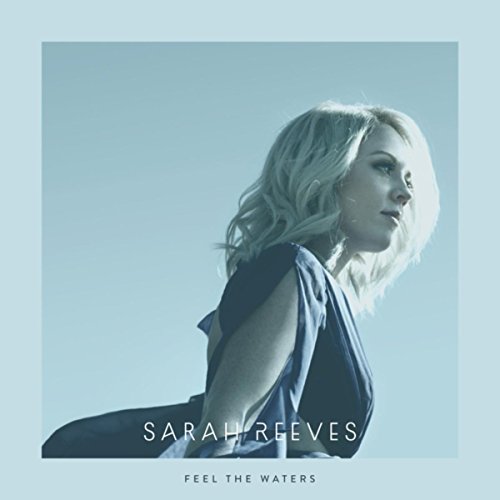 Sarah Reeves has been on fire of late. Not literally on fire…just a figure of speech. Since signing to Word Records last year, she has been placing pen to paper and then paper to singing and recording, as from last year til now, we’ve heard four brand new singles that all could have the potential of being on her forthcoming full-length album coming later on at an undisclosed date in 2018. Songs like ‘Nowhere’, ‘Details’ and ‘Right Where You Want Me’ have all been vertical songs and all with an upbeat sound. Enter in this new song called ‘Feel the Waters’; and is by far the most unique and different song Sarah has recorded throughout all her music career thus far!

Though Sarah has been within and around the music industry for quite some time, her music still hasn’t really seen to be as popular as other worship artists…and maybe that’s ok. Sarah has been making music since 2009 (ever since she exploded onto the scene with her chart-topping radio hit ‘Sweet, Sweet Sound’), with a few EPs and her 2011 indie album Broken Things…and then nothing, radio silence. Until 2017. Sarah, quite possibly one of Christian music’s most underrated worship artists, went underground with radio silence up until earlier on in 2017 when she released her comeback song ‘Nowhere’, followed by ‘Details’ and ‘Right Where You Want Me’ earlier on in 2018. Since signing to Word Label Group last year, this is a new season of growth and song-writing for Sarah as she embarks on the journey to release another studio album very soon (her new album is slated to release sometime in 2018!). And now to tie us over, we have had the pleasure to hear another song in ‘Feel the Waters’, a love song directed to her husband (compared to many of her songs previously that have had more of a God-focus). Needless to say; Sarah continues to have the passion and enthusiasm, shown very much in her cover videos as well as her original songs of late. This very thing is also true of ‘Feel the Waters’!

And so what does this song display, when it all comes down to it? What is different about this song that isn’t explored as much in albums and songs of hers previously? Well firstly, this song itself is a love track (a romantic one) rather than a song about Jesus, the Christian life and our struggles, often topics that have been discussed at one time or another in Sarah’s music before. As Sarah divulges herself, ‘…[Feel the Waters] is unlike anything I’ve ever released before because it’s actually a love song to my husband! It’s vulnerable and personal as it tells the redemption story of our once broken marriage. There are too many songs out there about breakups and giving up. This is our story of forgiveness, enduring hardships and fighting for the greater love. It’s romantic and I actually got the first line of the chorus straight from scripture – Song of Solomon 4:11 – ‘The kisses of your lips drip honey’. God created romance and I’m not afraid to sing about it! I pray that this inspires you whether you’re married, single or dating. Love is worth fighting for…’ And therefore this above quote is the essence of the song as a whole. It is a realisation that true love between spouses is one worth fighting for. That the trials and difficulties are all worth it because we know that it is in the midst of these difficulties that God refine couples and encourage them to re-discover their own love and passion for each other (and hopefully encourage each other in their walk with God in the process). ‘Feel the Waters’ is a unique one by Sarah, and one that is very much welcomed by myself as the new year of 2018 continues to progress and come into view. Alongside ‘Details’, ‘Nowhere’ and ‘Right Where You Want Me’, ‘Feel the Waters’ is a reminder that Sarah’s music and style spreads wide…and that is a good thing!

And so there you have it… ‘Feel the Waters’! And even though this new track from Sarah is quite possibly the most different song she’s ever written and recorded in her career thus far (I know I said this about ‘Right Where You Want Me’ but I nevertheless truly think this is the case with this new track also!); it is good to see Sarah experimenting with a song out of her comfort zone. And with songs like “Nowhere”, “Right Where You Want Me” and “Details”, and now “Feel the Waters” being pre-cursors as to what the new album from Sarah would sound like, her forthcoming album is one to be excited for. A certain purchase if you enjoy worship music, or even music that has a slight romantic angle, Sarah Reeves is an artist that, still relatively up and coming even after quite some time, will hopefully receive the recognition she deserves after her two radio singles this year, ‘Feel the Waters’ and ‘Right Where You Want Me’. Well done Sarah for this song as well as her other three released early this year and last year; can’t wait to the full length album whenever it releases!