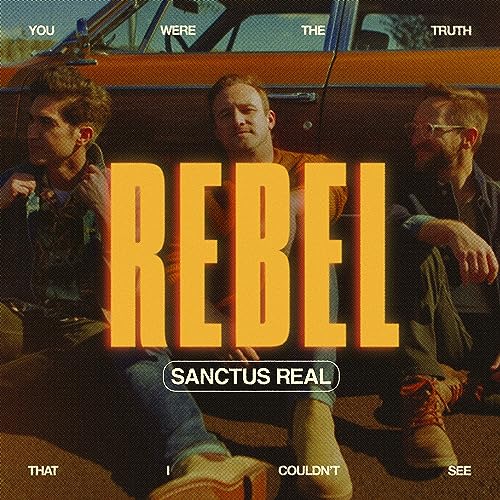 Sanctus Real has been a band that has released powerful music and standout albums every so often over the last 20 or so years. The band have had tremendous success over the years, ever since their first independent album released in the late 1990s. Since signing to Sparrow Records in the early 2000s, the band has worn its heart on its sleeve. With songs like ‘Lead Me’ discussing about the theme of standing up and leading the family as fathers, husbands and men in general (with the help of the Lord, of course), ‘Lay it Down’ encouraging us to lay down our troubles and worries at the foot of the cross, and ‘We Need Each Other’ showcasing the very need for us to be around people, that our company and camaraderie is what is going to allow us to get through this life not alone; we are reminded that such a band exists where they are not afraid to discuss and sing about themes that would otherwise be swept under the carpet. Fast forward till 2021…lead singer Matt Hammitt left the band in 2015, and with such a dramatic personnel change that undergone at a time when many lead singers of many bands were moving on to other places (Kevin Max and subsequently Josh Engler both left Audio Adrenaline, Adam Agee took over, Jon Steingard took over from Jason Dunn as lead singer of Hawk Nelson); worship leader Dustin Lolli picked up from where Matt Hammitt left off.

And while with any lead singer change, we can all become hesitant at first, what transpired was something unique and different- This is Love EP dropped early in 2016; and featured more of a rock sound that was originally present in many of Sanctus Real’s earlier material (re: Say it Loud and Fight the Tide). Changed followed in 2018; and featured the chart-topping radio single ‘Confidence’ and other standouts like ‘Safe in My Father’s Arms’ and the title track. Dustin fit right in with the band, and while as a sound, Sanctus Real was moving from more of a rock-anthem based band to more of a pop-radio friendly atmosphere, the band’s message and heart continued to stay the same, giving us songs borne out of local ministry and what people have been dealing with in their churches at home. We saw another album drop in 2019, Unstoppable God on August 30th, and featuring songs like ‘Jesus Loves You’, ‘Today, Tomorrow & Forever’ and ‘Lazarus’ to name a few, the band continued to be one of my favourites within the CCM sonicspace. Now in 2021, Dustin Lolli, Chris Rohman and Mark Graalman have presented to us another song to listen to, and together with ‘My God is Still the Same’, could make up the basis of a new album coming from the band…soon.

‘Rebel’ released from the band just this past Friday; and is the second single (following on from ‘My God is Still the Same’) to have been released this COVID-19 season. The song itself is a reminder to us all, to really consider what it means to be a rebel for Christ, to really consider if picking up our proverbial cross and following Jesus, being a rebel for Him in a sense that we don’t follow whatever the world says of us, and we stand against the grain and believe things that wouldn’t be ‘popular’, is really worth it for us in the end. Because really at the end of the day, we all have to count the cost of our own decisions- Jesus did, and what He said and the things He stood for, and what He claimed to be (God incarnate in the flesh, the Messiah who is able to heal the sick and to forgive sins), got Him killed on a cross. So, if we are to consider ourselves followers of Christ, then we must consider these things ourselves, and be ok with being rebels, with being misfits, outsiders, people that don’t ‘fit’, because ultimately in the end, it is because we’re different, because we stand out, that we can fulfil the things that Christ has called us to, knowing full well that once we embrace the ‘rebel’ label on our lives, we can chase the Lord with full abandon, knowing that ‘…look at me, now I’m finally free, I’ve got nothing left to hide, if I’m a fool, I’m a fool for You, and I give You all that pride, I was stumbling down the road to Damascus but You knew who I could be, I heard You say, “Come, oh, come, be a rebel for Me”…’

‘…our hope is that this song will inspire people to remember the goodness of God in their lives, how He’s always been there, bringing them through any difficult circumstance they’ve ever experienced. God is faithful to His loving and caring nature. We can trust we will continue to see His kindness toward us and experience His grace again and again…’ While it can still take some getting used to, hearing Dustin’s voice instead of Matt’s, let us know that this isn’t the first lead-singer change in a prominent CCM band- Newsboys being a very big example of a lead-singer change that has resulted in success still. Sanctus Real still brings about a similar message, whether it’s Matt at the helm or Dustin, and yes; there will be some die-hard fans that will boycott anything without Matt Hamiitt…and that’s ok. Then there are others, like me, who are indeed open to Dustin and his perspective on the music. And that’s ok, too. ‘Rebel’, ‘My God is Still the Same’, Unstoppable God, and maybe even Changed before, are being held to the standard of all of Matt Hammitt’s albums previously, when to be honest, they should be compared to themselves. In essence, a lead singer change can be a band change without the band change. Because like it or not, the lead singer makes the band. And for me, since coming into the fold in 2016, Dustin Lolli has recaptured a vibrant spirit and made the band continue, when I’m sure there was every intention to quit at the end of 2015. Nevertheless, here we are with ‘Rebel’, a song that I’ve enjoyed and I’m sure others will enjoy, if they love and appreciate similar artists like Tenth Avenue North, Casting Crowns or Sidewalk Prophets. No, they’re not similar to Sanctus Real 1.0, because they’re not, and I’m sure they’re not trying to be. I’m sure once we understand that every new singer doesn’t have to emulate the previous one, and that a new sound can be developed for the better, the sooner our judgements of the band and albums once there’s a turnaround of lead singer, can decrease.