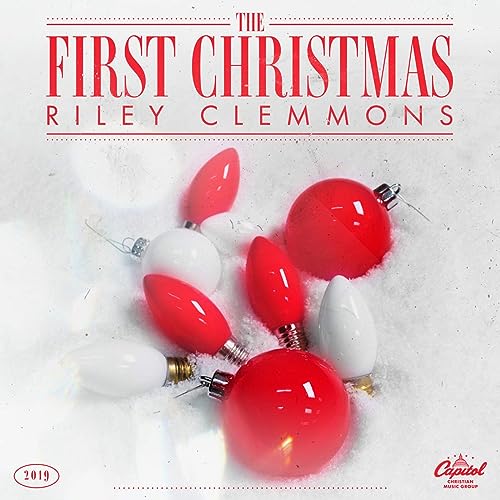 Bursting on the scene when she was just 18 years old, Riley Clemmons transfixed and enthralled us all with her debut single “Broken Prayers” via Capitol Christian Music Group, and then her self-titled debut album in August last year. And from these impacting and compelling 12 melodies, there’s absolutely no doubt that Riley has an extremely bright future ahead of her, as she steps into the doors God has opened for her. Relatively new in the CCM industry, I think the first time I, or for that matter anyone, heard her voice on the radio, or internet, or wherever you can hear music these days; was her duet with Social Club Misfits on “Misfit Anthem” early in 2017. Since then, Riley’s music has been a revelation- and you can read my brother’s review of Riley Clemmons here; but on the heels of brand new singles “Free” and “Fighting For Me”, now the time has come for brand new music. A Christmas EP four songs long titled The First Christmas has dropped today, with original song “The First Christmas” and carols “Last Christmas, “Have Yourself A Merry Little Christmas” and “Silent Night”- now online for our thorough enjoyment. And enjoyment for ourselves it will be, even though Christmas is still exactly 2 whole months or so away!

With the renditions of both the traditional and well-known carols brilliantly recorded by Riley, it’s worth noting that Riley has modernised and updated them just a bit. Both “Silent Night” and “Have Yourself A Merry Little Christmas” are typically sombre, reflective, and piano only songs- that’s what we’ve been accustomed to hearing every time December rolls around. Not so with these impacting melodies- which don’t deserve any more time of me talking about them other the Youtube playlist for you guys to have a listen to for yourselves- it’s that good, and no words will do these two songs justice! I even reckon that these two renditions are some of the best Christmas renditions I’ve heard in recent memory. It’s new, fresh, revitalising- Riley has done us all proud and deserves to be congratulated.

Holiday song “Last Christmas” is an unfortunate downside on a brilliant offering (even Riley’s sublime vocals can’t save this repetitive underwhelming rendition); but the original title track is one of my favourite original Christmas tunes since TobyMac’s “Bring Home The Holidays”. Biblically strong as Riley sings about recapturing the magic of the first Christmas, to view it through the lens of the shepherds or the wise men; we are encouraged to view Christmas for what it is- a celebration of Jesus’ birth, for which so many people have lost that very true notion. A plus on this song as well is the chorus of “The First Noel” tagged on as a bridge to this song.

With Riley Clemmons also having released powerful and impacting music videos for her singles “Broken Prayers”, “Hold On”, “Better For It” and “Broke”; I believe that the only way to go for Riley is up and up. Hopefully Riley Clemmons will be the next name on everyone’s lips in maybe both Christian and mainstream markets very soon? Obviously after Lauren Daigle of course! What more can I say? That Riley’s soothing and captivating voice makes me want to listen to Christmas music all year long? Because it does! So check out these four tracks pronto! Well done Riley, can’t wait for more and more new music!