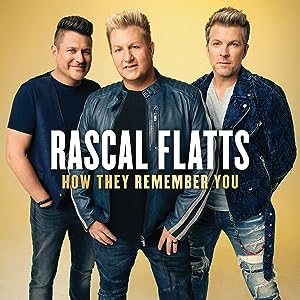 Rascal Flatts – How They Remember You (Amazon mp3/iTunes)

Rascal Flatts is one of the most successful country groups in all of modern music history. With hit songs like ‘Bless the Broken Road’, ‘Life is a Highway’, ‘Praying for Daylight’, ‘Why’, ‘Unstoppable’, ‘The Day Before You’, ‘My Wish’, ‘Changed’ and ‘I Won’t Let Go’, to name a few; Gary LeVox, Jon Don Rooney and Jay DeMarcus have presented to us a highly publicised and prolific career in music thus far, and even though there was an announcement this year of their disbanding, this trio has made a lasting mark on not only country music but on music in general, that I reckon few other bands have. They are influential enough that I even wrote a blog about them last year, and upon hearing these songs throughout the last year or so, I can safely say that my aversion to country music all this time, is slowly fading away. Now in 2020, a few months after their announcement of moving separate ways, this powerful country trio, after the emotive and poignant, and albeitly timely and fitting Kenny Rogers cover ‘Through the Years’, has given to us a final summation of music in the form of How They Remember You, a 7 track EP complete with ‘Through the Years’, alongside their most recent single ‘How They Remember You’, unveiled to us last month.

Standing at track #7, ‘Through the Years’ itself is a commemoration and honouring of the late-great Kenny Rogers; and has meant a lot more to the band than I’m sure even we realise. The song itself wasn’t a high-charting song by Kenny, by any means. Rather, this song is full of a lot of sentiment and poignancy, as Rascal Flatts deliver a soulful performance, as this song about honouring someone through the years of their craft, can be as applicable to the honouring of Kenny Rogers, as well as one that honours Rascal Flatts too. Jay, Gary and Don have crafted a career that I’m sure artists dream of- and this country/spiritual band have impacted a lot of artists than we may even realise- Hunter Hayes and Dan + Shay, to name two that have been influenced by Rascal Flatts and their music. The song itself- about love and commitment through the years- either talking about someone’s spouse, or friends or family, people in their life that they know they can’t live without. The song is also honouring to the fans of Rascal Flatts too, thanking them for their years of fandom and service as the albums released year upon year upon year. ‘Through the Years’ challenges us all to find a love that is lasting as the years roll on, and understand that in this time of isolation and self-quarantine, our relationships with others need to take more of a front-seat than just about anything else- for it is when we are in community that our mental health can be stronger at this time. ‘Through The Years’ is a perfect song for this era where we are in right now, as we contemplate and reflect upon the people in our lives that we are thankful for. Though I have never heard of Kenny’s version of ‘Through the Years’, I still can say that this rendition will make Kenny and the rest of country music proud, as such a song is fitting, for such a time as this.

‘How They Remember You’, title track and track #1 on this EP, is poignant more than ever, and carrying on the sentiment and message from Kenny Rogers’ ‘Through the Years’, ‘How They Remember You’ requires us all to take a look at ourselves to see how we have lived our lives, from birth to now, in a heavy introspection check at our inner selves to see what needs to be affirmed, and what needs to change quick because of its destructive nature, maybe even unbeknownst to ourselves. Jay, Don and Gary present a poignant track of how we want to be remembered at the end of the day- and what we do and say, how we act and how we serve people around us, will in fact reflect what is inside our hearts and what we truly believe about love, life, humanity, and ultimately God Himself. A song that challenges us to do better in such a time as this, ‘How They Remember You’ is in fact timely for this moment, one that reminds us all of how we need to always have reality checks on ourselves, in such a politically tense atmosphere, not just for the single nation of America, but for the whole world. The song is a gem of a moment where we understand that what we say and do have implications for people around us, and how we respond in moments of difficulty and trial will say a lot about our character, and about the God with whom we believe in.

Throughout the rest of the EP, we see both the fun-filled and the serious sides of the band, and with this EP being the last we’d see (in band capacity, maybe in the future, each of the band members could do something on their own…) of Rascal Flatts, these songs are both light and funny, and heartfelt and emotive all at the same time. In the realms and confines of the song, ‘Feel it in the Morning’ speaks about the morning after an intense relationship spark the night before, and asks and begs the question, of whether the people involved in the sparks colliding, feel it in the morning, or whether it was just in the heat of the moment, playing off emotion and nothing a little deeper. ‘Feel it in the Morning’ for each of us to lean on things more than just our fickle feeelings, as we hope and pray that we, be it in romantic or other situations, actually, truly, ‘feel’ it in the morning. For if we act too soon on issues in just the heat of the moment, things can get a little ugly, and such a song as this is a reminder for us to be a bit more vigilant and less hasty with decision made in a hurry. ‘Quick, Fast, in a Hurry’, featuring rising female country powerhouse Rachel Wammack, presents a song where the message of relationship, commitment, and seeing whether someone is really committed to something, after a call, is shown front and centre in this track. ‘Quick, Fast, in a Hurry’ presents a persona who’s asking someone else to come by to comfort them, because they need someone during a difficult time. And yet such a song as this can either be met with one of two ways- with hesitation and caution, or with passion, forgiveness and an unconditional love that will cause reconciliation and reuniting faster than you can say ‘quick fast in a hurry’. Such a song as this should hopefully bring us to evaluate (or even re-evaluate) relationships, and see what the best course of action is, when such a chaos or calamity occurs. ‘Looking Back’ speaks of someone who’s fresh from a breakup and all they can do is look back on all the good (and bad) memories that they once had, and while this song in and of itself isn’t a good place to be or even how to live, it is nevertheless still part of the grieving process after something as horrific as two people parting ways, as thus, such a song is maybe even a necessary component to healing. ‘Warmer’ follows next, and is a song about clarifying a relationship with a loved one, and asking whether they are getting ‘warmer’ in their relationship, wondering if taking baby steps is a better option than jumping all-in; while the last remaining song on the EP is ‘Sip Away’- a song that can be reminiscent of something that country stars like Keith Urban, Brad Paisley, Luke Bryan or even Billy Ray Cyrus, would record, rather than this band trio. Nevertheless, the song itself, according to the band, is ‘…about summertime, just chilling out on a boat, having a beer with your buddies and relaxing by the dock somewhere. It was one of those tunes that already had the elements there and it was just a fun, uptempo, finger-snapping sing-along song, and I just wanted to represent it and do the writers proud…’ ‘Sip Away’ is a song that doesn’t take itself that seriously, and is a fun-filled happy-go-lucky track, something that we as a people and human race, so desperately need, in such a time as this!

‘…we were just trying to create some new music while we were all hunkered down in our homes to have something for everybody to listen to. What can we do to still be uniquely Flatts, but sonically give people something they may not expect to hear? That’s part of the fun for me, after 20 years of making records with the Flatts. I mean, we’ve pretty much done everything there is to do from a sonic standpoint…We thought we were going to be on a farewell tour, and we thought that song [How They Remember You] was a perfect message, but things started to shift and that took on a whole new meaning as well. When the pandemic hit and we began to have so many friends and family affected by COVID-19, and so many friends that have lost their lives due to that, it took on a whole new meaning: How do you want to be remembered when you’re no longer here? What do you want your friends and your family to say about the kind of person you were when you leave this world? I think it’s just a great question right now for all of us to consider and to ask ourselves as we face probably one of the most horrible things that any of us will ever live through in our lifetime…’ Jay, Gary and Don have crafted a career that I’m sure artists dream of- and this country/spiritual band have impacted a lot of artists than we may even realise- Hunter Hayes and Dan + Shay, to name two that have been influenced by Rascal Flatts and their music.  This new EP, the last EP by the band, is something unique and powerful, and bookended by the title title track, and a Kenny Rogers cover (the two most impactful songs on the EP), we see the sad parting of a band that not only has impacted country music, but all of music too. Well done Jay, Don and Gary for such a poignant and heartfelt EP, here’s hoping people will continue to be impacted by the legacy of the band when they hear this music, as the months and years continue to progress ahead.

3 songs to listen to: Through the Years, Sip Away, How They Remember You