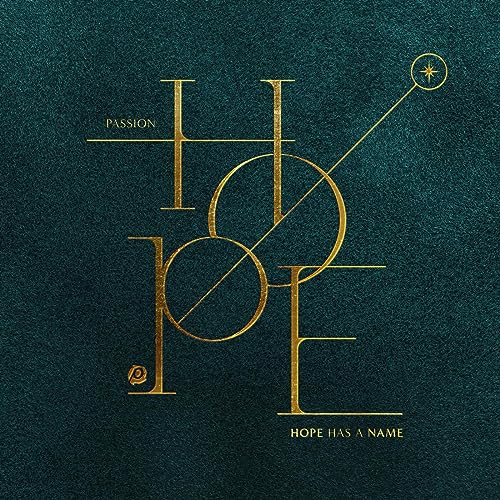 Another year, another Passion album. That’s probably one of the only things you can count on in life- death, taxes, as Passion albums every year. In the past though, Chris Tomlin, Matt Redman, Charlie Hall and Christy Nockels were a part of this massive global worship movement (and now they’re not for some unknown reason!), and now the group is helmed by Kristian Stanfill, Brett Younker, Sean Curran (formerly of Bellarive) and Melodie Malone, with special guest appearances from Crowder. Yet their mission has always remained the same. While you can read about all things Passion in all of the articles here; let me give you all a quick refresher of what the group is all about- and mind you this is quoted verbatim from my Whole Heart review from 2 years ago…simply because I’ve conveyed my thoughts most cohesively there, and there’s no reason to repeat myself. Well, here goes!

In 2018, Whole Heart released- and though I say this every year, I truly believed that Passion’s album from 2018 was as good as any they’ve ever recorded, with songs like “God You’re So Good”, “Ever Almighty”, “Almighty God”, “Hallelujah Our God Reigns”, “Ghost” and “All My Hope” all being some of my favourite Passion songs I’ve heard in a very long time (although nothing can really top the album Worthy Of Your Name). And while Follow You Anywhere released in January last year (as opposed to March!) and overall wasn’t as compelling nor engaging as previous Passion albums; and Roar was unveiled in March this year (of which you can view my thoughts here!); what does this mean for the latest project from Passion– a Christmas album titled Hope Has A Name? Though Passion could conceivably go on and on and on, and release countless albums to the point where each one afterwards sounds the same as the one before it; there has to be some unique features present in each release to keep all of us still interested. And the undoubted answer after numerous listens is that while musically there’s nothing much here that is different from previous Passion albums (I am certainly having Passion fatigue at the moment! Maybe I’m longing for the Passion of old, with Chris Tomlin, Matt Redman and Christy Nockels!), it’s the passion (no pun intended!) of each of the worship leaders of Kristian, Brett, Sean and Melodie, that still keep us excited and intrigued- and hopefully more so as the years progress. There may come a point where I am completely bored with Passion, and there certainly is enough here to keep me puzzled and confused (because there’s hardly any Christmas-y atmosphere!); but Hope Has A Name nonetheless has enough of its moments for me to keep me interested and quietly confident of the band’s future!

In a track list of 7 songs, 5 of the melodies here are ‘Christmas’ originals- and I say this very loosely, as you could sing these songs on a normal Sunday morning service at any point throughout the year, and they wouldn’t sound too out of place amongst songs like “Good, Good Father”, “The Blessing”, “Waymaker”, “So will I”, and “Run to The Father”. The Christmas original songs that I have loved in the past are songs that are about Jesus, but are also lyrically about the Christmas season. Sure these songs have that to an extent… but the fact is that they’re worship songs first. I guess that’s in keeping with Passion’s vision and mission, but for the casual listener, this release might be confusing, as it will sound like any other worship album out there. For immense Passion enthusiasts though, hope Has A Name will be the ‘best album since sliced bread’!

Opening the EP with the first of two carols in “O Come All Ye Faithful”, Melodie leads this heartfelt, emotive and poignant standout, as a new chorus (“His Name Shall Be”) is added in to modernise the track (not the Matt Redman chorus from a few years ago!); however this track, standing tall at just over 6 minutes, is not Christmas-y at all. It’s worshipful, don’t get me wrong… but I wouldn’t listen to this song to get into the Christmas spirit. That’s what Christmas albums from Michael W. Smith and Pentatonix are for! “Highest Hallelujah” with Brett Younker is next, and musically sounds slightly Christmas-y with strings and vibrant bells. Lyrically solid, with Brett singing out the Christmas story, and reminding us that we can sing out ‘…holy, holy, come let us adore Him as the angels sing, glory, glory, the highest hallelujah to the newborn King…’, the passion and engagement seem to be missing and void here, which is a shame; while the title track with Kristian Stanfill is great, and an album highlight- on the same level of “Jesus Messiah” from Chris Tomlin- but in my opinion isn’t a Christmas song at all. If it is, then I’d say “Jesus Messiah” should be as well, because that song briefly sings about Jesus’ birth (‘…He became sin who knew no sin, so we might become His righteousness…’).

Crowder’s rendition of “O Holy Night” follows, and though subdued, is the pinnacle of the album, as it’s raw, unfiltered, and heartfelt emotion ring out throughout the compelling worshipful cover; however, “The King Has Come” from Kristian Stanfill suffers the same fate as the title track. It’s a good song in it’s own right, and is one of the most inspiring and engaging that they’ve recorded ever… but it’s not a Christmas song. It simply isn’t. Would this song and others work more on a worship album? Undoubtedly and resoundingly- yes! “Grace Of God With Us”, sung by Chidima, is the same- with the heart-warming piano led worshipful song declaring ‘…glory to God in the highest, Jesus our Savior, the grace of God with us…’, but is a worship song incorrectly marketed as a Christmas song. “Hush”, the EP closer driven by the piano and led by Melodie Malone, is the exception, with the original track being lyrically specifically about Christmas, whereby Melodie encourages us to rest and to not rush, because of Jesus being born in a manger, and our duty and need and desire to worship Him because of this fact.

After the relative underwhelming nature of Follow You Anywhere, Roar was a great step in the right direction- as I once again was reminded that Passion’s heart is still the same- to bring glory to God in whatever setting they’re in, and to spread the gospel in whatever way they can. In that sense, as I am reminded that this is a movement that does what works for them, and will continue to give God the glory for however long God continues to put the calling on Louie and Shelly Giglio (after all, Passion is Louie’s brain-child and what God called and is still calling for him to do and be a part of!); I can give Hope Has A Name some leeway- as their ministry is to fellow believers. Given that this is the first Christmas release they’ve done… it’s pretty admirable- however Christmas enthusiasts should steer clear of this one. It isn’t known what will happen with Passion in the long-term (given that the COVID-19 virus has swept the globe and shows no signs of slowing down!), however now’s not the time to have philosophical questions. Now’s the time to sit back and listen to the lyrical and musical and vocal prowess of the Passion team- and sing along with Crowder, Melodie, Sean, Brett and Kristian. Need any more reasons to allow God to roar like a lion over our lives with favour and providence?

3 songs to listen to: O Come All Ye Faithful, Grace Of God With Us, Hush