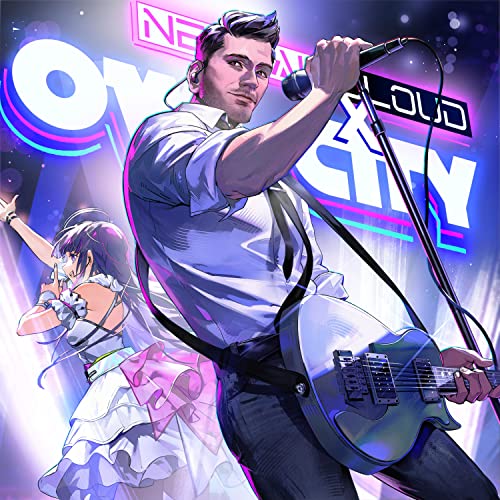 Owl City– Up To the Cloud (Single) (Amazon mp3/iTunes)

Does Adam Young, songwriter, and entertainer extraordinaire, need any introduction? Nope, I don’t think so- his song “Fireflies” under the popular moniker Owl City, has garnered him fans aplenty, as he rose up to fame and stardom very quickly since 2009. But just in case you are unsure of who he is (although he’s been around for 13 years or so as an artist…), let me give you a quick rundown. The shy, introverted, young, multi-instrumentalist and insomniac, who was playing with electronic sounds in his parent’s basement in his teens and early twenties, has now become a musical mainstream phenomenon, because of the aforementioned track. “Fireflies” is the song that skyrocketed to No. 1 on many charts worldwide in 2009, and the music video features Adam experimenting with instruments and sounds in his bedroom- with strange objects flying around. Though many have differing viewpoints on the song and the video, let’s move on, shall we?

After an immensely popular sophomore album Ocean Eyes (in 2010) that had the world talking (his debut album unfortunately flies by under the radar, who can remember it?), Adam released two more equally memorable and much-loved albums (All Things Bright And Beautiful and The Midsummer Station). And after dropping a mini album, the Ultraviolet EP in 2014, as well as a quasi-worship project Mobile Orchestra in 2015, and an autobiographical orchestral album Cinematic in 2018; we are now presented with something new from Adam. Adam loves to ‘go dark’ in between releases- maybe to reignite the creativity and maybe it’s part of his process. Whatever the reason, from 2018 til now, Adam has been sporadic on social media at best- but his latest song “Up To The Cloud”, which releases in 2 days and can now be viewed as a lyric video on YouTube, reminds us that Adam Young isn’t slowing down any time soon. This song, though perhaps not everyone’s ‘cup of tea’, is still vintage Owl City, and this melody has me anticipating whatever comes next from Adam. Known for combining fun, breezy, quirky and nonsensical electropop as well his deep and meaningful ballads and spiritual themed tracks filled with imagery and double or triple layered material; “Up To The Cloud” is no different.

Adam collaborating with many different people isn’t new to him. In the past, he’s collaborated with Britt Nicole, Carly Rae Jepsen, Hanson, Aloe Blacc, Joshua Micha, Smash Mouth, dc Talk, TobyMac, Jake Owen, Sarah Russell, and Shawn Chrystopher, to name a few; while Adam has also written and recorded songs for Wreck It Ralph (“When Can I See You Again”) and Legend Of The Guardians: The Owls Of Ga’Hoole (“To The Sky”), and also covered “Waving Through A Window” from Dear Evan Hansen. On this new song “Up To The Cloud”, Adam delivers a song for the mobile game Neural Cloud, kind of like an anime role playing online mobile game. I’m not that big into that kind of thing, but the beauty of this song is that the lyrics are vague enough for it to mean anything to anybody. Lyrically, Adam sings about being there for someone in trouble- and though he wrote to song to mean ‘this character in the game is a friend to this other character’, the same can be said of life. we all need people to be there for us and not to judge us- and Owl City’s new song reminds us all that every human on this planet has the same basic need. The need to feel loved and accepted. Isn’t it comforting and exciting that we can all bond over the most common thing that makes us all similar and alike?

What does the future hold for Owl City next? After the epic 18 track album in 2018 (that plays out like a soundtrack for a movie), and after this single about a mobile internet multiplayer role-playing game, what direction will Adam head into next? Is Adam Young still going to be singing about movies and key moments in his life, or more explicitly about his faith in Jesus Christ? Whatever the case, I’m still going to listen to his music, and I will encourage all of you to as well. Cinematic is a very unique album, and this new single (4 years in the making?), is a special track as well. Is Owl City releasing a new album in 2023? I sure hope so. But until that time, let’s bask in the knowledge that Adam is an incredibly talented singer and songwriter. Let’s be amazed that we all have gotten to experience the past few Owl City albums in real time. Isn’t that wonderful?