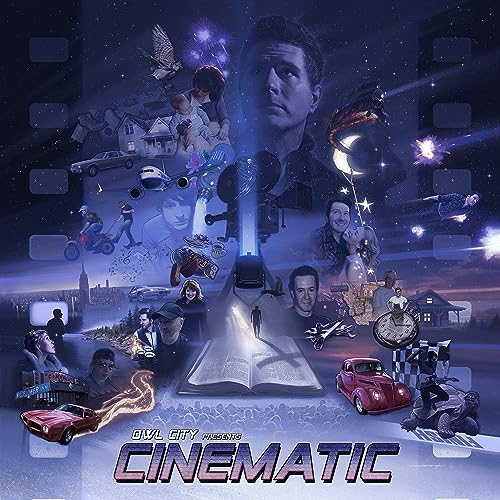 If you were to catalogue all of your life’s moments, and if you were also to create a movie based on your life…what would the music sound like? What would the soundtrack be? Is your life filled with happy-go-lucky pop tunes, or deep introspective ballads, or soaring anthems? Worship songs to Jesus in times of success, and maybe head banging metal tracks during those rebellious teenage years? it’s a neat concept, and one that Owl City has adopted for his most recent album Cinematic, which dropped last June. So why am I late to the party? While I have loved Adam Young’s outspokenness of his faith in songs like “You’re Not Alone”, “My Everything” and covers of hymns like “How Deep The Father’s Love For Us”, “Come Thou Fount”, “Untitled Hymn (Come To Jesus)” and “In Christ Alone”; Cinematic at the time didn’t resonate with me all that much. I mean, there was a whopping 18 tracks that overwhelmed me at the time (and still does); but this week I have decided to take the plunge and take a squiz as to how Adam Young sounds as an independent artist. I’ve come to a place right now where the 18 tracks aren’t daunting nor overwhelming.

Anyway, the other day I was trawling through my previous reviews of Owl City albums just to gain some inspiration as to how to structure this review, when I was immediately inspired as well, as I gained a sense of greater admiration for Adam and his craft. A couple of years ago, I reviewed Adam’s single “Not All Heroes Wear Capes”, linking that theme of our desperate need for an everyday hero to the theme of us all focusing on our superhero heroes on the TV, and how unhealthy it is if it is indeed an obsession. I’m not going to re-hash that review right here and now (you can read that review right here!); but my main point is that by reading that review- I did not receive any insights as how to structure my review (and I’m sure I’ll be alright, as I have been reviewing for nearly 8 years now!), but rather a greater appreciation for Adam’s music and more of an interest into how Cinematic would play out. So is this album worth your money? I say yes if you’re a die-hard Owl City fan, or at least know a bit of his music and what he stands for. if you have no clue as to who Adam Young is, then I suggest an earlier album would be best, and then revisit this one later on down the track.

Lead single “All My Friends” was released late in 2017 more than 6 months before the album was due to release- I guess to garner buzz and anticipation. However, to me I reckon this song is probably the weakest on the album. As Adam employs plenty of styles here- with the country style being the most prominent, we are treated to Adam relaying to us about how his childhood friends had a hand in making him who he is today, and that this song is a tribute and homage to his childhood that he will forever cherish and never take for granted. Yet despite the good intentions here, something is missing in my opinion, and the delivery of the heartfelt message falls flat. No hating on Adam here, but as a first single, I expected something a bit more… well, Owl City-ish. “All My Friends” is given a piano pop treatment in an alternate version at the end of the album, and that’s slightly more compelling, yet is still a tad cliché and cringy to listen to.

However as weak as the first single is, the rest of the songs bring us back to the whimsical, innocent, genuine young man we’ve all come to know and love, as Adam delivers songs based upon certain events in his life that has made him who he is today. Opener “Fiji Water” is probably one of the most personal songs Adam has recorded, as he recounts the moment he was scouted for a record label deal in 2008, and all of the things he saw and took in New York that has shaped his life until now (and if he had his time again, Adam would say to the executives thanks for the Fiji water, implying that Adam was more than grateful for that experience!); while the emotional piano led ballad “The 5th Of July” delves into the moments Adam was born. “House Wren” is a keys-led extremely catchy 80’s themed pop ditty that delves into Adam spending parts of his childhood at his grandparents’ house, and him imaging what life would be like for the wrens living in the vegetables in the backyard; and “Not All Heroes Wear Capes” (already reviewed!) speaks about everyday heroes and our need to have role models based in reality- in this case Adam champions his dad, and subtly alludes to the fact that Jesus Christ is the greatest hero of them all.

“Montana” is probably the most pop and the most cinematic song of the album, with strings and synth abound (and my enjoyability of this track is even heightened by the superb and near-flawless acoustic version of the track!). As Adam relays to us the vivid journey of self discovery of one of Adam’s relatives and the journey that brought him to Montana (literally) and into a life lived with happiness, satisfaction and fulfillment; we are encouraged to go after our dreams as well, even if our friends and family are against it, and even if it is farfetched and outlandish. While “Lucid Dream” is an EDM track that is also probably the most confusing track on the album- as Adam sings about his dreams and about how he’s fascinated as to how you are able to go anywhere and to any time while you’re sleeping; and “Cloud Nine” is an inspirational pop tune about staying level and grounded even when the world gets you down, with the help of people around you who support you- and it’s clear that through songs like these, you can tell that Adam is having a blast and that this album is probably the most personal to him at this very moment.

For many of us who know that Adam is a man of faith, it shouldn’t come as a shock to hear “Always”, a piano led slower-paced ballad where Adam sings from God’s perspective and comforts his dad during his health struggles. Though some of us might say that this song belongs on another album completely- I’d argue differently. This album is about key moments in Adam’s life, and because Jesus is a significant part of Adam’s life, it almost is expected that a song of faith would wind up on Cinematic– it’d be criminal if there were no songs of faith present… But all things considered, “Always” is a magical and heartfelt song, as Adam authentically relays to us that ‘…when the thunders roar, You don’t need to be afraid, I’ll lead you through the storm, so please remember when I say, I’m with you always…’, and provides us with hope that the God of the universe is in our corner always.

With Adam including the inspiration ballad “Winners Never Quit” as he fervently encourages us to keep on pressing on and ploughing through adversity even if you think you can’t; we are blessed to hear that Adam is relaying everything he knows in his life over to us- and that helpful information is sure to be invaluable to us in the future. “Madeline Island” follows; and is another throwback orchestral piece that harkens back to Adam’s childhood, and about a specific moment in 2013 where his parents and dog went on a holiday with him to Madeline Island- just because they could. As Adam honours his parents and the holiday by placing this song on the album, he indirectly tells all of us to cherish the moments in the present as we never know what’s around the corner. With a hopeful message like this and others littered all throughout Cinematic, it’s puzzling as to why this album hasn’t received any awards of any kind yet.

Epitomizing the entire theme of key moments in one’s life is the next song “Be Brave”. On a surface level, the song encourages us to be brave and to take risks despite whatever comes of them- yet a deeper look depicts Adam’s life-defining, yet at the time simple and unassuming, decision to go to the movies one night at midnight. Little did Adam know, he’d meet his girlfriend there. The two have been together ever since, and this track, standing tall at just over 5 minutes, reminds us of the fact that making choices can have beautiful outcomes- and all we have to do is to take risks and step into the unknown. It’s a confronting song, but one that is needed for all of us to know that life takes twists and turns, but ultimately brings you to better places than you’d thought you’d end up if you planned everything out.

Like previous odes to Montana and Madeline Island, Adam once again pays homage to another important landmark/town in his life, in “New York City”- vividly listing the reasons why the city of one of the most beautiful, vibrant, and eclectic cities on earth. The penultimate track “Firebird” is next, and is one of the few songs aside from “All My Friends” that I do not personally connect with, especially since it’s Adam singing from the viewpoint of his girlfriend, and her relationship with her brother and his Firebird car. It’s beautifully recorded and professionally done, and Adam sings his heart out as always; but this is a song that meanders along and doesn’t really grab me. On the other hand, I reckon the album closer “Cinematic” is one of Adam’s best songs I’ve heard in a while, as he employs countless movie motifs and imagery to create the very theme he wanted for this album- that our life is like a movie and we’re the star. We shouldn’t want to live someone else’s story- just our own.

What does the future hold for Owl City next? After the epic 18 track album that plays out like a soundtrack for a movie, what direction will Adam head into next? Is Adam Young still going to be singing about movies and key moments in his life, or more explicitly about his faith in Jesus Christ? Whatever the case, I’m still going to listen to his music, and I will encourage all of you to as well. But more importantly, have you been changed from listening to Cinematic which has now been released for around 9 months or so? Let me know in the comments below, and let us know how key moments in your life, including relationships with your parents or friends or with Jesus has impacted your life!