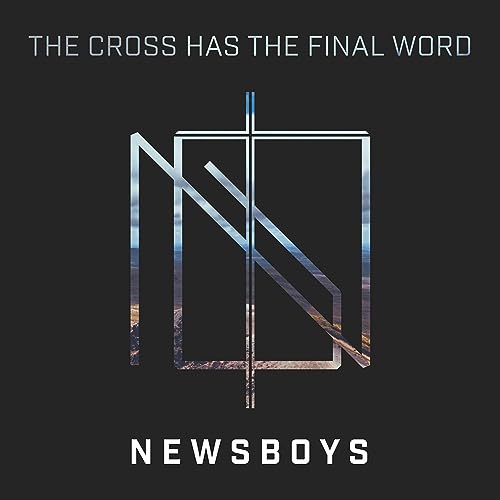 Newsboys– The Cross Has the Final Word (Single) (iTunes)

The Newsboys. Everyone knows them. Even if you haven’t heard any song by the band who originated from Australia in the 1980s (I find it hard to believe…I mean, everyone has heard songs like ‘Shine’, ‘Breakfast’ and ‘Entertaining Angels’ right?), we all know the good ol’ Aussie band from down-under that broke the stigma that bands/artists outside the U.S., especially from Australia, couldn’t become famous. And here we are, decades later. And radio singles later too. Think about it- with songs like ‘Shine’, ‘Breakfast’, ‘Reality’, ‘Entertaining Angels’, ‘I Am Free’, ‘Something Beautiful’, ‘In The Hands of God’ and ‘Stay Strong’, it’s no wonder that Newsboys have been successful- with such heart and passion delivered in every song that they record, we are met with one of CCM’s pioneers throughout the last few decades. But we all know the story. In 2009, lead singer Peter Furler stepped away from the band. He left. Decided to take a break. Maybe with the intention of coming back in some capacity, maybe not, but regardless, we as fans were left in such disarray. Yet never fear, because since then, and for the next 8 years (and counting), we’ve been blessed with the empowering vocals of Michael Tait, 1/3 of the ‘on-hiatus’ group DC Talk. While I know the music (and singing) style of Michael is totally different to that of Peter, he made a quasi-new identity of the band, and forged ahead with Born Again (2010), God’s Not Dead (2011), Restart (2013), Hallelujah For the Cross (2014) and most recently Love Riot last year on Fair Trade Services (their 3rd record label in their music career, after Sparrow Records and Inpop Records).

Then there’s the other side of the coin. Since Peter Furler left the band, we have been equally blessed to see that Peter never shied away from music completely. After a solid 2 years or so being refreshed, we were surprised, yet equally pleased and profoundly impacted by Peter’s first solo album On Fire in 2011, that spawned the singles ‘Reach’, ‘I’m Alive’ and ‘Matter of Faith’. Furthering on from his highly successful solo debut, Peter formed the ‘Peter Furler Band’ with friends Dave Ghazarian and Jeff Irizarry, releasing Sun and Shield in 2014. While that album didn’t really have much traction or popularity since it was recorded and released independently, Peter Furler fans like myself nevertheless still listened, and enjoyed songs like the title track, ‘Dare I Say’, ‘The Overcomer’ and ‘We Won’t Forget’.

But this is not a history lesson on the Newsboys or Peter Furler. Nor it is a comparison about who I think had the better career post 2009. What I have discussed has all led to this statement- this new single from the Newsboys is a cover of Cody Carnes’ (husband of worship leader and singer-songwriter Kari Jobe) new song ‘The Cross Has the Final Word’, that released today, May 5th. What is even more interesting about this new track from Michael and co. is this- Peter Furler is a guest vocal on the track. With no press release (thus far) about the song, we have no idea whether Peter is just guesting on the track or whether he is joining the band again in some capacity (considering that Peter’s last solo effort was Sun and Shield in 2014). Nevertheless, it is nice to hear Peter’s vocals again on a track, it’s been a while since I’ve heard Peter, who I reckon is one of CCM’s most passionate and enthusiastic singer-songwriters of this generation. Even though Michael has made the Newsboys his own since 2009, the band hasn’t been the same since Peter left. Who knows what may happen in the future. If this collaboration is just a one-off, then fair enough. If it is anything more, then…let us be prepared for what could be one of the biggest stories in Christian music ever since Audio Adrenaline reformed in 2013, and reformed again in 2015!

So…what is this song about? What is so catchy, infectious and compelling about ‘The Cross Has the Final Word’ that has the Newsboys covering it? The song, originally released by Cody a few months ago, is about the cross, and speaks to the heart of what we believe to be the basis and foundation of our faith. The cross is where the transaction happened. Where Jesus took it upon Himself to take all the sin from every man that has lived and will ever live. To take the sin and to rid the world of an eternity without Him. So that we can live in communion with the Father, Son and Spirit in heaven once our life here on Earth is over. Here’s the story behind the track as told in Cody’s words, as well as Peter and Michael’s words, of a song that I reckon, alongside other worshipful standouts in 2017 (‘What a Beautiful Name’- Hillsong Worship, ‘Death Was Arrested’- North Point InsideOut), will be some of the most impacting songs for the whole year:

According to Cody Carnes: I started writing the song on Good Friday 2016. I was sitting on my couch at home, reading through the story of the crucifixion. I remember having a heavy heart that particular night, because of the senseless, evil attacks that were occurring at the time. I remember asking God to show me the hope in the midst of it all – the light in the darkness. And in the next moment, I heard the statement – the cross has the final word. It brought me to tears, and a few minutes later I knew I had a responsibility to share it and find a way to put it into a song for the church. So I sat at the piano until 3am that night, jotted down every line I could think of and sang it until I couldn’t keep my eyes open. Kari remembers it keeping her up most of the night too. Haha. From that moment, that statement has brought me so much peace to remember that God is always in control; He knows the end from the beginning. Darkness and fear lost its power at the cross.

According to Michael Tait: It was a blast singing together with Peter, and we hope it is a message that encourages you.  To the weary believer… the person who is doubting… feeling like you’re all washed up… you’re not done!  God has plans for your life, and He has a purpose for your existence.  No matter what is in your past, forgiveness can be found in the cross.  You can leap forward in faith and victory!

So hearing the heart behind the track, we are reminded of the power of music, and the power of a song. One song can spark so much, which is what I reckon ‘The Cross Has the Final Word’ could do in the upcoming months ahead. So for the Newsboys to cover it is only fitting. Will the song become more popular because of the band? Most definitely. But I reckon the real talking point won’t be the song at all. It’ll be the presence of Peter Furler in the track. Still, this song is a gem, and would be a major loss if the WOW Hits authorities don’t consider this song to be included on WOW Hits 2018, the track listing releasing in a few months’ time. Nevertheless, we are still blessed by what Peter and Michael deliver. Until such a press release about the song and whether Peter is just guesting or if there’s something more, let us all enjoy this song, and be reminded about the message, that indeed, the cross has the final word.

3 songs to listen to: The Cross Has the Final Word x 3, and listen to the great duet between Michael Tait and Peter Furler