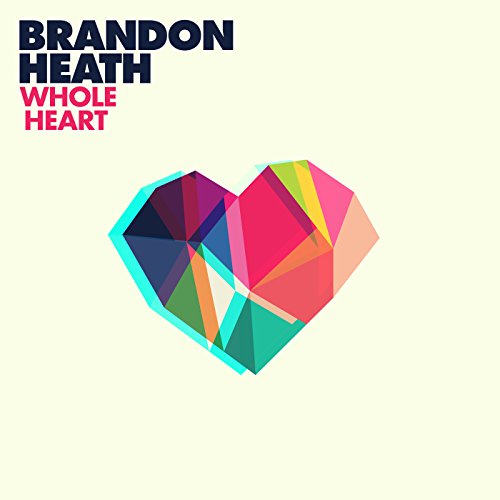 One of the most emotive and encouraging singer-songwriters I’ve heard this side of the millennia, Brandon Heath burst onto the scene with his chart-topping radio hit ‘I’m Not Who I Was’, released in 2006 and catalogues his own journey to faith, as we’re reminded that who we were before isn’t who we are right now, since our introduction to Christ and His love. Since such a time as 2006, we as listeners have been blessed to hear Brandon deliver song after song full of vibrancy, poignancy and enthusiasm, from songs like ‘Give Me Your Eyes’, ‘Your Love’, ‘The Light in Me’ and ‘Love Never Fails’, to ‘Wait and See’, ‘No Turning Back’, ‘Behold Our God’, and ‘Love Does’, to name a few.

Brandon even collaborated with worship leader Christy Nockels to give us quite possibly one of Brandon’s few worshipful songs in ‘No Not One’, what I reckon is one of the most underrated worship songs I’ve heard, by any artist, within the last ten years. In fact, dare I say that Brandon and his music, in an overall sense, are very much underrated in an industry today that celebrates the popular artists and shuns, sadly, the independent ones? Nevertheless, Brandon’s music is something that everyone ought to listen to, at least once. Now as we enter in 2017, we hear a new song from Brandon- ‘Whole Heart’. With this song being the first single from a yet-to-be-titled album releasing quite possibly towards the end of the year; this song is a must have if you have enjoyed Brandon’s previous music, or if you enjoy similar artists like Josh Wilson, Sidewalk Prophets, or Big Daddy Weave.

While the song only stands in length at 3:02, one can be forgiven if you think the song is rushed, not as whole-hearted as his previous offerings of albums past. Yet the reality is far from what we can initially think about the track. Because honestly, there is a stigma around shorter songs vs longer ones- that if a song is short, it must lack in quality compared to a song that is longer. Yet sometimes, it is the longer songs that seemingly drag on, and the shorter ones often ‘get to the point’ quicker and with much more emphasis and impact. As Brandon invites us into this song that speaks about how we as Christians need to love our Father with our whole hearts, and give Him everything in our lives, not just the bits we may think He wants (and keep everything else, especially things we’re too ashamed at unveiling, to ourselves), the song captures in essence what the Christian life is about- surrendering our whole selves to the One who created us and invite Him to make us and shape us into the vessels He wants to share His love to people around us…so in a nutshell, we’re to lay down all of our own desires and ambitions, allowing the Lord to reshape and realign our prorities so that what we undertake and accomplish can further His kingdom and purposes both now and into the future. Isn’t it a real and great privilege to be the carriers of God’s presence wherever we go? The song is a moment of realisation, that often it is hard to unveil the bits of ourselves we have concealed for so long.

Yet as Brandon delivers such fervent urgency amidst the light electronic keyboard riffs and the CCM music atmosphere; “Whole Heart” is the anthem we never knew we needed, giving us a revelation if you will, that ‘…where there’s hurting, You show me what healing can do, where there’s hatred, You show me how kindness can move, where there’s fear deep inside, I won’t run, I won’t hide, I’ll give You all of me so that You can see every broken piece and open up my whole heart…’ Surrender is never easy, but with it, comes a freedom and release, that the Lord will pick up the broken pieces inside us a reshape them to form what we can only describe as something unique, magnificent, encouraging and reflecting of what our Father can accomplish. A song that’s certain to be one of my favourites in the upcoming months ahead (at this point currently), “Whole Heart” is a precursor to what we can see to happen on the new Brandon Heath album later on during 2017! Well done Brandon for such a powerful track, can’t wait to the full-length album whenever it releases!

3 songs to listen to: Whole Heart…until we all realise that it is our whole hearts that the Lord is interested in, rather than part of it that we often give to Him!