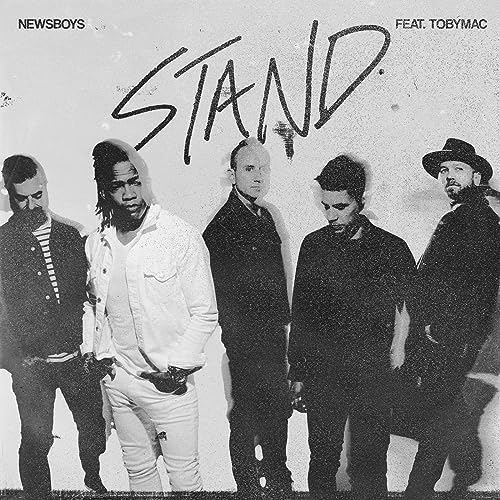 One of the most inspiring, honest, vulnerable, comforting, moving, and inspiring artists I’ve heard, is the Aussie CCM band Newsboys. Comprising of Michael Tait, Jeff Frankenstein, Jody Davis and Duncan Phillips, this 30 + year old band originated in the Sunshine Coast of Queensland. My brother Jon wrote a blog about the group that you can read about here, as well as his most recent reviews on the band’s album STAND from last year, and their 2019 album UNITED, which reunited long-time members Phil Joel and Peter Furler for a season- for the highly popular Newsboys United tour as well! One of the bands that I was listening to back in 2006 onwards- it was this band amongst others that helped me expand my musical horizons beyond just Carman and Delirious?. Not that those aforementioned artists were bad in any way (check out blogs about Carman and Delirious? here and here!); but when you look at Newsboys and their impact the humble Aussie band have had on the CCM industry as a whole (read our blog about Newsboys here!)… how could you not be enamoured and impacted by their music? Songs like “Breakfast”, “Shine”, “He Reigns”, “Love Liberty Disco”, “It Is You”, “Million Pieces”, “Entertaining Angels”, “In Wonder”, “Wherever We Go”, “In The Hands Of God”, “Born Again”, “God’s Not Dead”, “We Believe”, “Guilty”, “Crazy”, “I’m Not Ashamed”, “You Are My King (Amazing Love)”, “Step Up To The Microphone”, “Stay Strong”, “Glorious”, “Lord (I Don’t Know)”, “Thrive”, “Devotion”, “Presence (My Heart’s Desire)”, “I Am Free”, “That Home” and “Live With Abandon” have all impacted my life, and most likely the lives of many people in the whole world.

Even with Michael Tait replacing Peter Furler as lead vocals back in 2009… listeners and critics have welcomed this transition of lead vocals with open arms. The result is a group that has been around for over 30 years, who has presented the word of God in their songs many, many times, and a band who is unashamed of the gospel, and whose mission is to draw people closer to Jesus, regardless of how popular that may be or look like to the modern world at large. In 2019, the group released their most ambitious project in probably CCM history. UNITED featured the return of Phil Joel and Peter Furler- and you can read all about the album and our thoughts here. If you’re fascinated about Newsboys and their history, you can read their Wikipedia… but since today is when Newsboys have released their brand new single “STAND” with TobyMac… it’s time to take notice and let you know my thoughts, don’t you think?

Let me say this. If you’re thinking that you’ve heard this song before, then you’re right. “STAND” with TobyMac is the very same song “STAND”- the title track from Newsboys’ album from a number of months ago. It’s just re-recorded with Toby’s vocals in the bridge; and from a creative or inventive standpoint, this rendition just isn’t that great. But if we can look past the tackiness of the song (I don’t think it was re-recorded by Michael Tait, but rather Toby’s new vocals were just ‘pasted on’!), I firmly believe that this song is what the world needs right now. Yes- even now. For what Jon has written about this melody way back in October stands true today: ‘STAND’, the title track, really speaks to the heart of what being a follower of Christ really is, and the seriousness of taking a stand for Christ in this climate right now where everyone’s convictions blow left and right at the drop of a hat. ‘STAND’, and in effect, the entire album, is a reminder that we should know as believers in Christ, where we stand, in terms of our salvation, but also on other issues in life and society too. We’re either one way or the other, the middle ground, at least when it comes to our own eternity, isn’t something that we should mess around with. With the world being divided so much because it seems like people are being cancelled left right and centre for what they do or don’t believe about x, y, z and every other issue underneath the sun, a melody like “STAND” is refreshing. Because when it all comes down to it, you stand for something, you stand of your convictions, for your non-negotiable primary issues that you won’t ever, ever bend; yet outside of that, you can have dialogue and discourse with people who disagree with you, and find common ground in the messiness of discussions about life. Standing for something doesn’t mean you hate those who don’t agree with you; and this song reminds us to be firm in our convictions, but love others and show others Jesus as well.

What more can I say about “STAND” the song, that I haven’t mentioned already? Personally I reckon this song is just a good as any from their catalogue of late- songs like “We Believe”, “God’s Not Dead”, “Born Again” and “Guilty” to name a few. Though if you’re not a fan of Michael Tait as lead singer and prefer Peter Furler instead, then “STAND” may not resonate with you, but I’d say check it out anyway, as you never know if it’ll be your new favourite song or not. As the overall encompassing theme of Newsboys’ latest project is one that is being convicted and passionate to stand for Christ in everything that we do; we are reminded by this fact and encouraged to be more active in our faith, and being pushed a little is always a good thing. Well done guys for a stellar song. Although this rendition isn’t the best, the song overall is needed and reminds us to take a stand; and thus, this melody will be one that will be on my music playlists for a long time!