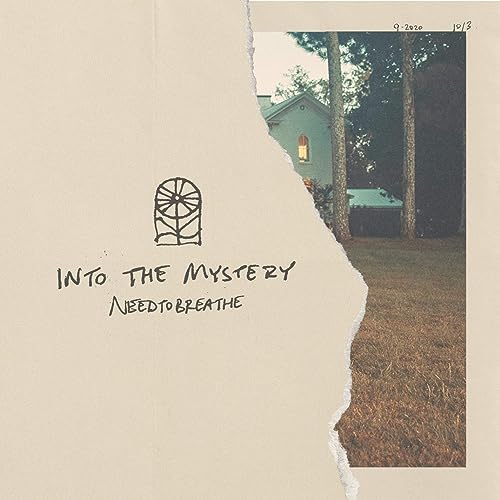 Currently right now one of the most popular and respected bands in both Christian and mainstream media markets (probably according to both listeners and critics; and alongside bands and artists such as Switchfoot, Owl City, Lifehouse, Relient K, for KING & COUNTRY, and Skillet!), Needtobreathe are a band whom I have increasingly been actively following and listening to over the past few years, and have been respecting more and more. Branching out and recording plenty of songs specifically directed to the mainstream media, the South Carolina quartet comprised of brothers Bear and Bo, and good friends Seth and Josh; with the four having wowed us again and again with their honest lyrics, catchy music and southern rock goodness, also providing us with plenty of inspiring and thought-provoking messages to ponder over as well.

With their most successful and critically acclaimed full length studio album HARD LOVE more than four years old (you can read my review here!), the 12 track collection of pop rock goodness showed us once again what a force Bear, Bo, Seth and Josh are right now, and how they’re definitely a band to be reckoned with both now and into the future. Providing us songs that compel us to dwell upon and ponder the deep issues of life, in their last couple of albums alone (Rivers In The Wasteland and HARD LOVE), there were plenty of songs that personally impacted and spoke to me, such as “Wasteland”, “Multiplied”, “Brother”, “Testify”, “Hard Love”, “The Heart”, “Happiness” and “Difference Maker”.. Fast forward to 2020, and here we are, blessed with another Needtobreathe release. Since that time in 2016, Bear’s brother Bo has left the band, and we’ve also been fortunate to hear new projects from the group, inclusive of Hard Cuts: Songs from the Hard Love Sessions, Forever On Your Side (Niles City Sound Sessions), and Acoustic Live Vol. 1; but now with a label change (from Atlantic to Centricity) and their Centricity Music debut Out Of Body, we are now presented with one of the most impacting Needtobreathe albums yet, and one of my absolute favourite albums of 2020! We reviewed the celebrated and much loved Centricity Music debut (read our review here!); but now it’s time for another live release from these friends and rockers.

It seems that Out Of Body released yesterday… and let me say that it was one of the most challenging, inspiring, uplifting and poignant albums of 2020. But because Bear, Bo and Josh couldn’t tour because of COVID-19… they pulled a Taylor Swift, and recorded new music instead. They quarantined together for three weeks late last year, and finished an album that is slated for release later on this year. And while the band will tour sometime for their Into The Mystery Tour with The New Respects and Switchfoot (and will presumably sing songs from Out Of Body) on it; for now we have the group’s surprise new single “Into The Mystery” off their forthcoming new album of the same name. And trust me… this is vintage Needtobreathe, a pretty powerful song, as the group harkens back to their rock roots.

Littered with imagery and sung from the perspective of a father to his now grown up children (or in essence the band singing to their children or future children), “Into The Mystery” reaffirms the transient nature of life and recounts the messiness and ups and downs of journeying alone or with someone through the unknown. As Bear eloquently asks his children that ‘…love is not a cage, love is not a path, love’s a steady hand waitin’ for the storm to pass, you loved me then when you needed me, will you still when it’s not so easy?…’ and then later on lets them know that ‘…I just wanna be loved by you, I cannot resist the need to hear you say it, whatever you do, I will be there, son, I will follow you anywhere…’, we are met with a track that is thematically a sequel to “Banks”. A song about relationships (like “Banks”) that could be read as something spiritual and meaning much more if you delve deeper and analyse beyond what the band probably intended; God has breathed life into this quasi-spiritual anthem, as Bear, Bo and Josh have created another winner. What’s next on the horizon? Well no-one knows, particularly with the situation in India getting worse by the day. What we do know is that touring for music artists will resume some time- and when that happens, expect Needtobreathe shows to be sold out. As far as goal for the band- well I’d say they’ve achieved a lot… so how about a Christmas album or a covers album next time? And if you aren’t a fan of the band, should you dive deep “Into The Mystery” (no pun intended!)? Yes, yes, and yes a thousand times over. Bear Rinehart is a once-in-a-generation songwriter and singer, and this song alone is proof of that!

Some news. So last fall when we couldn’t go out on tour for Out of Body, we did something a little crazy. We all got covid tested, moved into a house in the middle of nowhere in Tennessee, and made what will be our eighth studio album… Into The Mystery. We gave ourselves 21 days to record and produce this record from scratch. A few friends and familiar faces joined us… but more on that later. The first single & title track is out May 6th at 10am ET (presave now). The full album is coming later this year. We have some other HUGE surprises in store, but this post is already getting a little long. Did we also mention that we’re officially going back out on tour this fall? It’s all happening. Can’t wait to bring you Into The Mystery. Love yall!!