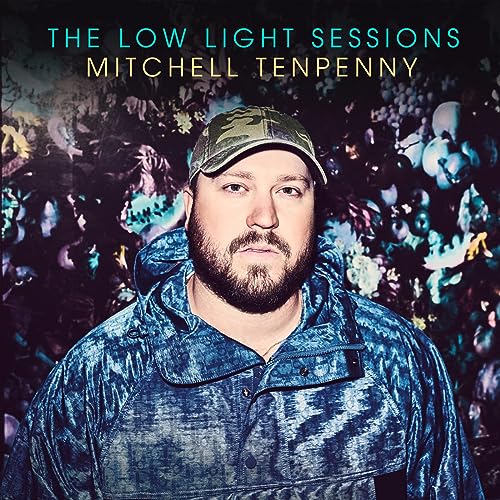 Last year, I wrote a pretty negative review of Mitchell Tenpenny’s Christmas album Naughty List. At the time, I hadn’t heard a single thing about Mitchell and his music. I had first heard about him when his video for “Bucket List” surfaced online one day on my YouTube home page. I was… well I wasn’t transfixed or that captivated, but it was ok-ish. A song that actually would fit right at home on K-Love or any other Christian radio station, that speaks about how we should always strive to do what we want to do today instead of some far off distant date in the future which may or may not come, that ‘…I’ma love a little more, dream a little deeper, leave all the leavers, keep all the keepers, find peace of mind in the time the good Lord gives, I’ma cross one off, put two more on it, say, “I love you” ‘fore the moment’s gone, and never have to ask myself, “What if”, when I get to the bottom of my bucket list…’. And the fact that this radio friendly song would sound right at home on a CCM radio station, is in part due to the fact that Mitchell has a vocal eerily similar to CCM artist Micah Tyler, and also reminds me vocally of Danny Gokey, JJ Weeks, Dave from Sidewalk Prophets, and Bart from MercyMe. Despite being a country singer (who hasn’t really dominated that much on the country charts until around about… now?) it seemed to me that Mitchell didn’t really have the presence of a country star and does actually sound like a CCM singer. In essence, I concluded that Naughty List was just… there. Not a good album, but an album fit for background music. Mitchell is a country star on the rise though, and I’m sure he will dominate in the upcoming months and years. Fast forward to now, and Mitchell recently announced his brand-new album This Is The Heavy. We will be reviewing that project later on in September… but Mitchell’s EP The Low Light Sessions (which released in April this year) deserves a mention. I wasn’t going to listen to this project. I had decided that Mitchell wasn’t a ground-breaking country artist. But “Horseshoes And Hand Grenades” is such a powerful and catchy opener… and so I had to listen, and give my thoughts.

My fans are so good to me and react quickly each time I put out new music. I’ve held onto these songs as I didn’t want them to get overshadowed in some of the other recent projects. I wanted to wait until I was in a good place with my life, and I feel I’m strong enough to share them now. I was a different person then and it feels good to look back and know I’ve come through that dark time.

From the very beginning (“Horseshoes And Hand Grenades”), something being so close and not getting it, to the very end, where I wrote that song (“The Way You Are”) in quarantine by myself about my fiancé and finding the one, it kind of goes through my life in the last five years in different ways. The sequence is important. I hope people listen to it from beginning to end. I miss that. I’m a vinyl guy. Even CDs, I love just putting them in and letting them play. I wanted to make sure that this felt that way like it was a movie. We just did a music video for the whole concept of it. It’s a longer video, and it’s fun to play through the whole thing.

I remember writing that song in a small room downtown. Something was going on downtown, like a protest or something. My mom was saying, “Hey, be careful, they’re blocking traffic.” I remember thinking if people are out there protesting something, they must really feel like something’s going on. Something is wrong. Let’s write a song about that. The song was actually called “We Need Jesus” at first. When I started cutting it in the studio, I thought “We Need Jesus” is telling everyone what to do, and I don’t ever want to tell someone what to do. I don’t like politics, I don’t like talking about them, I don’t care what you believe in. So I didn’t want to force it. Let’s just change the title to “Dear Jesus” at this point. I’m just going to get down on one knee at the end of it. It changed a little bit over time, but this is still the same stuff that was going on when we wrote it. It’s pretty crazy that it held up that long.

I love writing breakup songs when I’m happy. It’s fun to go back and think about those emotions and remember why it was. A lot of people think those are the hard times in the past, but I like reflecting on that stuff. I think it gives a good perspective on where you’re at now. Just thinking about what kind of man I was then, why did that relationship not work. If I had done things like I do today, would we still be together and would I want to still be together? There are a lot of questions like that you think of that are interesting to me.

Opening with the powerful, passionate yet equally melancholy and contemplative ballad “Horseshoes And Hand Grenades”, we are met with a heartfelt song in which Mitchell recounts how his ex and him weren’t on the same page when it came to dating. He was all in and dreaming about the future with this girl, and she was stringing him along and wasn’t that serious- but making him think that she was. Even though Mitchell right now is in a happy relationship (engaged to Meghan Patrick), this song still speaks volumes and is still relatable and relevant. Because even though this melody is about a past relationship, we are still encouraged to ensure that if we are in a relationship with somebody, that both people are on the same page with their expectations of where the relationship is headed.

“Dear Jesus”, which to me is the heartbeat of the album, is next, and is an authentic and vulnerable prayer, where Mitchell asks God to help and to be someone who can lead His people. Similar in theme to Mickey Guyton’s “Heaven Down Here” and Maren Morris’ “Better Than We Found It”, this song of desperation is somewhat political, however is needed in today’s society, as Mitchell sings with intense passion and unwavering heart and soul, reiterating that ‘…I can’t bite my tongue no more, I can’t sit back and watch it happen, let the devil win the war, we’ve been down this road before, I thought we passed it, but we’ve turned back and now the streets are lined with picket signs, picking sides, mama’s crying, their babies dying, more soldiers going over than coming back, times like these we need someone to lead us, dear Jesus…’. “Mama Raised The Hell Out Of Me”, a tribute and an ode to Mitchell’s mother, reminds us of the unconditional love that mothers generally have for their children. With the song also encouraging us all to love our parents who raise us and to express all of our thanks and gratitude back to them, “Mama Raised The Hell Out Of Me” is thematically similar to “That Home” from Newsboys; while the heartbreaking and emotional melody “My Next Sad Song” speaks about a guy falling in love with a girl, even though he knows she will break his heart- is this about the same person in the opening song “Horseshoes And Hand Grenades”?

Probably one of the saddest songs I’ve heard this year is “I Know Something She Don’t Know”, where the shoe is on the other foot- the man in this song is stringing the girl along and the girl is clueless, and the girl thinks the relationship is going somewhere. It’s a painful song to listen to, but Mitchell reminds us that sometimes life is like this and that there are relationships that meander along like this. And so, we must be extra careful in the relationship we do have- we need to cherish all of them (romantic or platonic), because we don’t know if or when they’ll end. “I Can’t Get Another You”, an emotional and intense melody that is essentially about Mitchell not being over his ex, is a song that is in essence not about him at all as he’s happy in a relationship- however Mitchell eloquently describes the reality for some people- stuck in their lives because they like to live in the past and be hung up on someone who has probably forgotten them completely. “Don’t Make Me Choose”, presumably sung to Mitchell’s fiancé Meghan, speaks about how different aspects of his life make up who he is today, and that he doesn’t ever want Meghan to make him choose between something that makes him happy and something else that makes him equally as happy. It’s a song that delves into the concept of us all having two sides that make up the whole person of us; while The Low Light Sessions ends with the pure love song “The Way You Are”- an acoustic ballad that Mitchell directs to Meghan and relays that he loves her immensely, and that ‘…sweet as magnolia, hu’dred proof in a mason jar, don’t change a thing about you, ’cause I love you just the way you are…’

Mitchell Tenpenny is indeed a country star on the rise- I’ve mentioned this already. Mitchell is also an artist that I’m positive will dominate in the upcoming months and years. Naughty List was underwhelming… but The Low Light Sessions is a superb EP that delivers on all accounts- musically, thematically, lyrically and vocally. Country albums are supposed to inspire, move, comfort, impact and encourage. This one inspires a lot, unlike Mitchell’s Christmas album. There are plenty of gems here (maybe aside from “My Next Sad Song”)… and now I have high hopes for This Is The Heavy. Sure, Mitchell’s voice isn’t that unique. But he more than makes up for it with some incredible songs and heartfelt lyrics. So give this EP a chance… I’m sure you will feel blessed and inspired. I know I was! Well done Mitchell, I can’t wait to hear what’s next from you in the future!

3 songs to listen to: Dear Jesus, Mama Raised The Hell Out Of Me, Don’t Make Me Choose