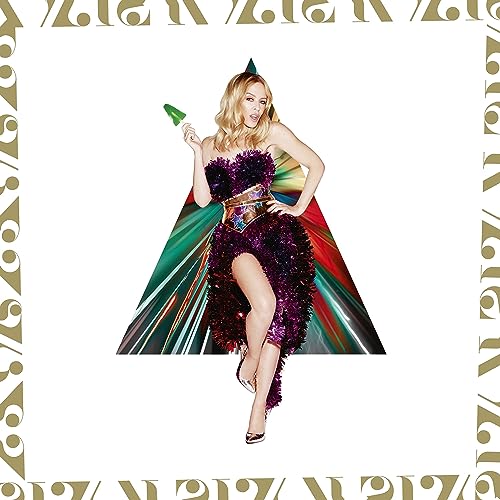 Initial thoughts: With the length of the album being a whopping 22 tracks (and standing at around 73 minutes), this is an album that is unfortunately too long for my liking. There’s nothing wrong with these songs per se- 14 out of the 22 are either original songs or covers of holiday-ish songs written by artists gone by- instead of the carols/holiday tracks that famously litter almost every other Christmas album that has been released since…well, ever. Kylie’s album is unique, but at 22 tracks long, feels like an unfortunate bore by the time track #22 comes around. Not intentional though, and maybe it could’ve been better if the 22 tracks were split up into two Christmas volumes instead of one (or just 2 discs in the same Christmas album release).

Reason to listen: 14 out of the 22 tracks on this Snow Queen Deluxe Edition album of Kylie’s Christmas are either original songs written by Kylie herself (or written by someone for Kylie to sing specifically for this album), or songs Kylie has covered by other artists, for this album too. It’s different, unique, and all-round fun. There are duets with TV personalities (James Corden) as well as duets with people who’ve passed away too (Frank Sinatra), not to mention the fun-filled tracks of ‘Winter Wonderland’, ‘It’s the Most Wonderful Time of the Year’, ‘Let it Snow’ and ‘Wonderful Christmastime’, to name a few.

Reason to buy: Not that much of a reason to buy. I guess only if you’re a massive diehard Kylie Minogue fan, then this Christmas album is for you. Or if this album is below $15. Otherwise, this album would be a great addition to any Spotify Christmas playlist…but to purchase, it has to be really, really cheap, or you’re a massive fan. Other than it, it’s worth streaming, but that’s about it.

Reason to skip: If you’re saturated with Christmas albums and don’t necessarily want to venture into an album that has 14/22 songs originally written (or covers). If you’re happy to not really know half the track list, and want to experiment with this Christmas/holiday release, then by all means, but a valid reason to ‘skip’ would be if you are more inclined to enjoy Christmas carols and holiday songs, instead of these tracks presented on Kylie’s album.

No. of obscure songs: 1 (I’m Gonna Be Warm This Winter)

Does it have heart?: I…think so? I hope so? The song ‘Every Day Like Christmas’ is a definite highlight for the album, while ‘100 Degrees’ is a danceable summer duet Kylie has created with her sister Dannii. I hope that this album at the end of the day was delivered with a true passion that was exhibited, but even if the enthusiasm was ‘forced’, that doesn’t negate the fact that this album delivers technically. Can you fake enthusiasm and heart on the deepest level? Maybe. I hope Kylie’s enthusiasm was genuine.

Does it have a Christmas-y atmosphere?: Yes, yes and yes. 1000% yes. With strings, whistles, bells and a heavy piano presence across a lot of these songs, it’s like being transported back to the 1960s in all the best ways possible.

Uniqueness?: Kind of. With Kylie’s prominent musical genre throughout the years being pop/disco; this style of music, especially for Christmas music, is a bit of a departure for her. There are still disco songs here on this Christmas release (namely, ‘100 Degrees’), songs that sound like Coldplay (‘Every Day’s Like Christmas’, ‘Christmas Lights’), even pure pop Christmas tracks (‘At Christmas’, ‘Stay Another Day’) and EDM inspired fan-favourites (‘Wonderful Christmastime’) and classic Christmas tunes as well (‘It’s the Most Wonderful Time of the Year’, ‘Santa Baby’, ‘Have Yourself a Merry Little Christmas’). Maybe a drawback to this album, would be the wide variety of musical genres (that have been employed to Christmas songs in the past) present in this Christmas album- to the casual listener of Kylie (or even the casual listener of Christmas music), this album could seem busy- tempo and music-wise.

Christmas message: Unfortunately…no. There’s no mention of Jesus Christ, His birth, or the reason why He came. I don’t know if Kylie is even ‘religious’ or even has any faith. Regardless, there’s been plenty of pop artists who have covered Christmas carols in the past, so, the track list would’ve been strengthened even a little, if there were songs present like ‘The First Noel’, ‘O Come All Ye Faithful’ or even the over-covered ‘Silent Night’.

Closing thoughts: Anyone who’s a fan of Kylie’s previous material would love this album. If you’re daunted by the length of the track list, then there’s no pressure to purchase this album, just cherry-pick the songs you like from Spotify instead.

4 songs to listen to: 100 Degrees, Every Day’s Like Christmas, Stay Another Day, At Christmas

Yes/no; why/why not?: Yes, to listen to straightaway, just on the basis and reputation that Kylie herself is an Australian/British music icon. But to buy…only if it’s below $15, and even then, it’s up to the individual’s personal taste.