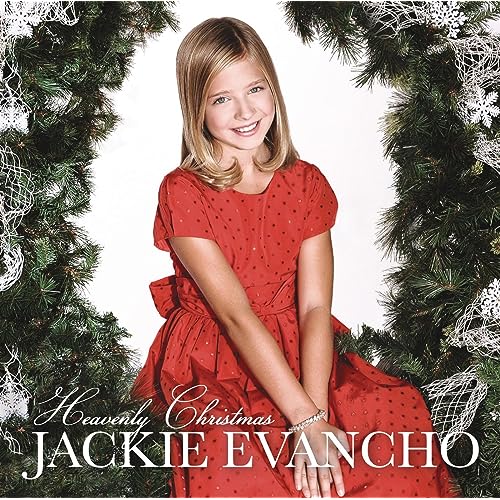 Initial thoughts: Operatic pop artist Jackie Evancho, famous for her rise to fame through her America’s Got Talent audition way back in 2011, unveiled her opera/pop Christmas album Heavenly Christmas at the end of 2011. Recording that album when she was 10/11, even back then it was well known that Jackie’s vocals and her presence was very much something to behold, and though I’m sure everyone wanted her to win Season 5 of America’s Got Talent (she was runner-up to the actual winner Michael Grimm), her coming second actually worked in her favour- now in 2022, Jackie’s career is much more consistent and well-known compared to Michael’s. This Christmas album is the first of two- and usually, anytime someone unveils their first _____ album, it’s always something to treasure and enjoy wholeheartedly, right?

Reason to listen: It’s Jackie Evancho. That should be reason enough, right? Jackie’s enthusiasm and ability is way beyond her years, and sometimes when listening, you forget she’s 11 or so. Her vocals are effortless, and her passion is flawless. In fact, don’t just listen to the album. Buy it straightaway. It’s that good!

Reason to buy: See the reason above. Jackie’s delivered a near-flawless album full of holiday classics and Christmas carols. While it’s only 10 tracks (the album could’ve had a few more songs to stretch out the track list from 10 to 13 or 14, what it lacks in length of the album, it makes up for in the passion delivered by Jackie herself. A must-buy if you’re a fan of operatic pop a la Josh Groban.

Reason to skip: No reason at all. Or unless you don’t like operatic pop, or if you’re the Grinch and don’t like Christmas music. Other than that, everyone who is a fan of music, period, should be listening, at least once, to Jackie’s album- well ahead of its time.

No. of originals/covers: 2 (Believe, Walking in the Air)

No. of obscure songs: None

Does it have heart?: Jackie’s music always has heart, and this album is no exception. With passion in her voice far beyond her 11 years (she was 11 when she recorded this Christmas album), make no mistake- Jackie, even then, was seen to be destined for great things, and as we look upon it all now from 2022 looking back, we can see that Jackie, by far, is one of the most highly successful finalists of any season of America’s Got Talent…ever. Her heart is undeniable, which is what makes this album so, so worth it.

Does it have a Christmas-y atmosphere?: With a strong organ/piano/strings presence, there’s a sense of a ‘winter-y’ atmosphere as whistles, bells, and an operatic voice from Jackie authenticate the atmosphere that a lot of Christmas songs have over the years. This isn’t your ‘modern’ Christmas album, it’s traditional through and through. And to be reminded of the music and style of a lot of these carols, is a great reminder to understand where these songs came from.

Uniqueness?: Not necessarily. Yes, Jackie does have a distinct sound. But this is not the first time where Christmas songs were undertaken in such a ‘winter-y’ atmosphere. A lot of Christmas songs in the 1500s, 1600s and the 1700s had a music style similar to Jackie’s…so Jackie’s style of operatic music isn’t ‘wow’ or ‘unique’, when looking at music from a grander POV. It’s probably just ‘wow’ and ‘unique’ compared to the music of now (the last 20 years or so).

Christmas message: to the nth degree (and that is a good, good thing). ‘The First Noel’, ‘Away in a Manger’, ‘What Child is This’, ‘O Little Town of Bethlehem’ and ‘O Come All Ye Faithful’ all have strong Christo-centric Christmas messages, and with Jackie’s passionate vocals, what more can you ask for from a God-honouring Christmas track?

Closing thoughts: Anyone who’s been a fan of Jackie over the years, or have been a fan of operatic pop, or someone who’s just a fan of music, period…get off your butt and at least listen to it on spotify. Preferably buy it, somehow, someway. It’s that good.

3 songs to listen to: Believe, I’ll Be Home For Christmas, Walking in the Air

Yes/no; why/why not?: I would, but that’s my personal opinion. People don’t necessarily gravitate towards operatic pop nowadays, anyway. So, if you’re a massive fan of Jackie’s music (or Josh Groban’s), then yes, buy this album. But if you’re a casual listener of Christmas music, then check this album out on Spotify, at least once, and then go from there.