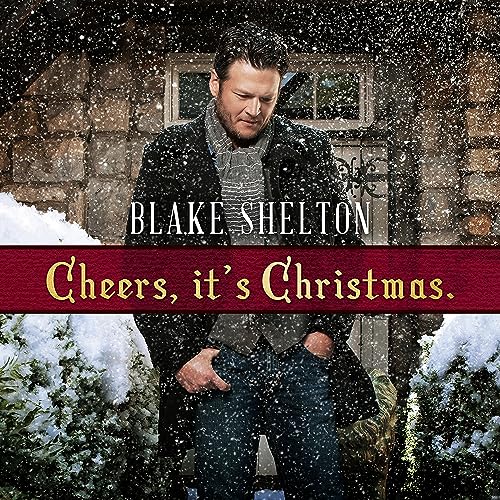 Initial thoughts: An overproduced Christmas album bloated at 14 tracks (standard) and 17 tracks (deluxe) with a country artist with a distinguishable twang that makes it hard to get into the holiday spirit… but a sustained listen has turned my expectations of this project into one of the most inspiring and encouraging Christmas albums ever. Blake has immense passion, and his fun, happy-go-lucky and positive demeanour is extremely contagious and infectious in a good way! The Grinch will soon be a Christmas loving Grinch if he’s listening to Cheers, It’s Christmas this Christmas- that’s for sure!

Reason to listen: There’s a joy and an infectious bubbly happiness all throughout on this Christmas album that I haven’t heard much on any other recent Christmas album. That may not be your opinion though, and that’s ok… but take a listen to the positive and celebratory Cheers, It’s Christmas and I’m sure you’ll be grinning from ear to ear and singing along in no time!

Reason to skip: Because you don’t like country music? That could be possible… so I guess Blake may not be your cup of tea. Otherwise, I’d say give this album a shot. You’ll be pleasantly surprised. And yes, take my word on it!

Does it have heart?: From what I’ve heard of country music, it seems like they’re the most authentic, honest and vulnerable artists ever. They’re a special breed of artist- and it’s the same trend on Cheers, It’s Christmas. Blake is as vulnerable as ever here, especially on “Savior’s Shadow” where he sings about his faith in Jesus. Though a number of these songs are ‘holiday’ in nature, I’d say this album over Bublé’s Christmas any day of the week!

Does it have a Christmas-y atmosphere?: It has a country atmosphere, and a reworked Christmas verse/chorus for Michael Buble’s smash hit “Home”. There’s a few bells and whistles here and there (especially on “The Christmas Song”)… so could I say that the atmosphere is semi-Christmas-y?

Christmas message: This album is a holiday album through and through. Kind of like the country version of Michael Buble’s Christmas but superior in every way. Although “There’s A New Kid In Town” and the Christmas version of “Savior’s Shadow” are explicit about Jesus- which is very good for listeners to hear and think about matters of faith and whether Jesus was who He said He was.

Closing thoughts: Some would say that because of the ‘secular’ nature of the album that it wouldn’t be good to listen to at Christmas time when we are celebrating Jesus’ birth. However I reckon that this album deserves at least listening, for “Savior’s Shadow” and “There’s A New Kid In Town” alone! And for the compelling duet with Michael Bublé called “Home”! While Christmas used to be synonymous with Michael Bublé’s Christmas, now I for one can hear a threat posed here. Can Blake invade the holiday season and compete with Michael on his own merit! Yep, of course he can!

3 songs to listen to: Savior’s Shadow, Home, There’s A New Kid In Town

Yes/no; why/why not?: I would say buy the album even if you’re not a country music fan! If you find it in the store, grab it. Blake has never sounded better, and no doubt you will be in the Christmas spirit at the end of the first track- even if you listen to the album in the July, August or September!