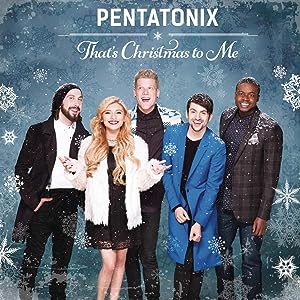 That’s Christmas to Me

Initial thoughts: Pentatonix have made a name for themselves as being one of the most impactful acapella groups out there, ever. Being famous for mostly releasing Christmas albums every couple of years, plus a slew of covers and a lone all-original album in 2015, let us all travel back to whence their stardom began, to see the album that kickstarted their fandom- the 2014 Christmas album That’s Christmas to Me.

Reason to listen: It’s Pentatonix. No serious, it’s Pentatonix. If you’ve ever been around, and I just mean around, you probably would’ve heard of this powerful, emotive, poignant 5 piece acapella group. If you haven’t heard of them…well, google is definitely your friend, and stat! And after you’ve heard of them; and have googled their most famous hits (all Christmas-y songs, of course!), then come back to this album, and be amazed…quite literally.

Reason to buy: Do we really buy albums these days, let alone Christmas albums? No seriously, this album is a definite one to buy; if you were to be into buying albums at all. Pentatonix and all their material, especially the one that started it all off, are worthy of purchase…enough said. With all the harmonies from the 5 vocalists blending with each other so seamlessly, this album is a perfect companion to enjoy the holiday season, especially during 2020 when we need a lot of joy and cheer, which this album has in abundance.

Reason to skip: none, whatsoever. Well, one I guess. If you don’t love acapella music. If you don’t mind checking out a different genre, of what to see what all the fuss about Pentatonix is about, then this album is for you. If you’re a bah-humbug Scrooge character around Christmas, then hopefully this album by Pentatonix can fix all that!

No. of carols: 12- all but ‘Let It Go’, originally written song ‘That’s Christmas to Me’ and ‘Just For Now’ are carols in their own right, in one quirky form or another. You have ‘Dance of the Sugar Plum Fairy’ and ‘Santa Claus is Coming to Town’ in the same track-listing as ‘Hark the Herald Angels Sing’, ‘The First Noel’ and ‘Have Yourself a Merry Little Christmas’- a very eclectic and well-rounded set of Christmas songs.

No. of originals: 3- ‘Let it Go’ (Frozen franchise), ‘Just for Now’ (Imogen Heap) and ‘That’s Christmas to Me’ (originally written). Dare I say that ‘Let it Go’ is perhaps one of the most powerful and enjoyable covers of the song, ever? And it’s interesting and welcomed that the ‘Let It Go’ cover is in fact the song from the movie, rather than a cover of the altered Demi Lovato version of the track (which features a different bridge and an altered chorus!).

No of guest artists: one- Tori Kelly on the ‘Sleigh Ride’ medley.

Does it have heart?: Yes, very much so. It’s Pentatonix after all. Even though the lineup of acapella singers in the group have differing beliefs and faiths in general, the group nevertheless come together quite nicely to declare and proclaim Christmas songs with passion and fervent enthusiasm.

Does it have a Christmas-y atmosphere?: With a wide array of music on the album- from obscure Christmas songs (Dance of the Sugar Plum Fairy) and holiday tunes (Sleigh Ride, Have Yourself a Merry Little Christmas) to worshipful Christmas carols (Hark! The Herald Angels Sing, The First Noel), there is quite literally something for everyone- and the Christmas-y atmosphere on this album is high, very high. Along a similar vein to that of Michael Buble’s Christmas or Hanson’s Snowed In!

Christmas message: With a mixture of holiday, obscure and Christmas carols, there is some semblance of a Christmas message, the most ‘biblical’ song there is on the album is ‘Mary Did You Know’. But all in all, it doesn’t really matter whether the album is ‘Christmas-messagey’ or not, what matters is that people are taking notice of the band’s ability to create great Christmas songs, and through their renditions of songs people know, maybe, just maybe, the Lord can use these songs by Pentatonix to draw people to Himself, especially during such a time as Christmastime, a season of the year that both Christians and ordinary commonfolk celebrate as a collective.

Closing thoughts: Pentatonix, alongside youtuber Peter Hollens, have both a firm grip on acapella music (in my honest opinion), and this Christmas album is one of a kind- the way these 5 vocalists harmonise with each other, makes me pleased that the group went all the way on the 3rd season of the 2009 singing competition, The Sing Off.

3 songs to listen to: That’s Christmas to Me, Let it Go, Hark! The Herald Angels Sing

Yes/no; why/why not?: Yes. Yes. And for another time, Yes. Pentatonix is a band you all need to check out and pronto. What better way than to listen to their 2014 Christmas album, just in time for Christmas 2020. Who knows, maybe you all can get a new-found respect for acapella music? I know I have!