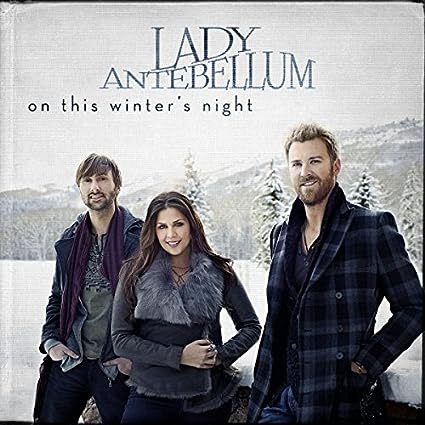 On This Winter’s Night

Initial thoughts: Lady A have had quite a career over the years- and in and amongst all of their studio albums (Lady Antebellum, Need You Now, Own the Night, Golden etc.), we see a Christmas album firmly planted in 2012, titled On this Winter’s Night. While the album can often get overlooked when scrolling through their discography (just like any other Christmas album getting overlooked when you scroll through any artist’s discography), I’ve recently had the pleasure to hear this country/Christmas album, one that is absolutely underrated and a must have if you enjoy other country artists like Martina McBride, Carrie Underwood or Rascal Flatts.

Reason to buy: if you’re a country fan, or a Lady A fan. If you’re just a casual listener of music, or a fan of another genre of music, then just listen to it on Spotify, and then go from there.

Reason to skip: if you don’t like country music, or don’t like Christmas music. Mind you, all but 2 are Christmas carols, so I guess if you’re sick of carols, then just check out ‘On This Winter’s Night’ on Spotify and move on to the next artist with the next inspiring Christmas album, whatever that may be.

No. of originals: 2 (inclusive of a Mariah Carey cover…yep, you know the one!)

No of guest artists: none, but the alternating singing between Charles Kelley and Hillary Scott more than make up for the lack of Christmas collaborations

Does it have heart?: as any other country artist has…so, I’m not sure? I know Hillary and Charles have great vocal chemistry and enthusiasm and passion, but heart? Can having ‘heart’ be faked? I dunno. It’s hard to tell, sometimes I feel like Lady A are singing from a well-rehearsed script, other times I feel like the music is free-flowing. So I’m not really sure. I guess you be the judge right?

Does it have a Christmas-y atmosphere?: not really. It has a feel of country mixed with blues, big band, light acoustic and a Christmas-sound a la Michael Buble all rolled into one. But mind you, a lot of other artists are undertaking this ‘atmosphere’, so by the time 2020 has rolled around, then Lady A’s album isn’t very unique…but does it really matter if you’re listening to it as a country enthusiast? Maybe not.

Uniqueness?: See above paragraph. Yes, there is a certain sound on this album that is prevalent on various other country Christmas albums, and so it’s not really unique in that way, but in a relation to other musical genres, it’s distinct country sound sets it apart from all the pop Christmas albums. So…it’s unique and not unique at the same time? You know what I mean, right?

Christmas message: With only two Christmas carols (amongst the sea of holiday songs- ‘Silent Night’ and ‘The First Noel’), the message of the real meaning of Christmas isn’t as prevalent as other Christmas albums. Nevertheless, we all know the faith of Hillary Scott, and the ever-evolving faith of Charles Kelley, and the band’s affiliation to music with a faith-based slant, and so we nevertheless still understand the heart of these singers even if the Christmas message of the album isn’t at the forefront. Still, this album will nevertheless be used by the Lord to bring people closer to Himself regardless of how many ‘Christmas’ carol songs are on the album or not.

Closing thoughts: Despite the album not being as ‘unique’ as I initially thought it was, the album was nevertheless still a joy to hear. Being reacquainted with songs like ‘I’ll Be Home for Christmas’, ‘Christmas (Baby Please Come Home)’, ‘The First Noel’ and the reworked ‘Silent Night’, is always a good thing. At least listen to it once. Maybe, just maybe you can back track and forward track through all of Lady A’s discography and discover such a powerful and heartfelt country band they are!

3 songs to listen to: On This Winter’s Night, Silent Night (Lord of My Life), Have Yourself a Merry Little Christmas

Yes/no; why/why not?: Buy it only if you’re a Lady A fan, or a fan of country music. Otherwise, just Spotify it. But listen to at least once. Maybe you can check out ‘On This Winter’s Night’, and see what happens from there! So in other words, yes if you’re a casual fan of Christmas music, and yes, yes, yes, if you’re a fan of Lady A.