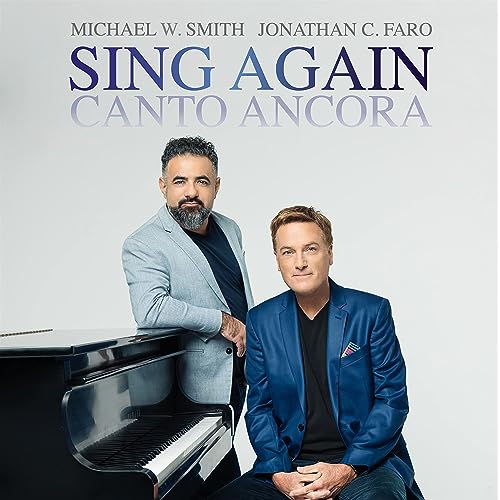 Michael W. Smith needs no introduction. Actually, he does need an introduction. My blog about him that I wrote in February 2019, linked here. And so now that we’re all across all things Michael and his music…he is definitely a legend, a living one at that. Michael, Amy Grant and Steven Curtis Chapman, have all three impacted and influenced CCM from the 1980s till now, and all three in their own way, shape and form, are still active in the music industry, even now. So it is comforting to know that in such an unpredictable and unnerving time of 2020 and 2021 with COVID-19, Michael continues to create music, even if live shows aren’t as frequent and prevalent within the last couple of years. Nevertheless, Michael unveiled to us Still Vol. 1 in late 2020, and while the concept and heart of the album was in the spot, the execution of it, left much to be desired (according to my own opinion). I reviewed the album (seen here), and while I didn’t fully connect with each of the 10 tracks on it, I was reminded of how other people could be impacted by this from the get-go. Nevertheless, I rated Still Vol. 1 pretty low, and thereby encouraged us all to check out Freedom and Glory again- before listening to Still Vol. 1 if people could. In September 2021 Michael released another project- a like-for-like 2021 re-recording of Michael’s iconic 2001 album Worship, titled Worship Forever– this time it’s delivered with guest vocalists Matt Redman (guesting on ‘The Heart of Worship’), Tauren Wells (on the underrated ‘More Love More Power’) and Amy Grant (duetting with Michael on the ever-powerful ‘Agnus Dei’). If you’re an avid fan of the 2001 Worship, then this album would’ve been a blast for anyone who heard it. Now here we are in early 2022, and Michael has once again released a project that further reminds us of the versatility of Michael in his craft and artistry. Michael has released to us, ‘Sing Again’.

Originally featured live on the Worship Forever project, the song is re-recorded this time, with an orchestra, as Michael duets with famous Italian opera singer, Jonathan Cilia Faro, and showcases a CCM-opera crossover of sorts. While it’s probably a first for a CCM artist to collaborate with an opera singer, ‘Sing Again’ actually works, with both Michael and Jonathan articulating quite nicely, the message of us coming alive after the darkness, singing again after rising from the ashes after the darkest night. A song that people can hopefully sing as their ‘triumphant’ song out of COVID-19 (while COVID-19 is very much still a real and current disease, many countries have taken all the necessary steps to mitigate much of the effects of it on a day-to-day basis), ‘Sing Again’ is a declaratory song, full of purpose, emotion, heart, and zeal. Both Michael and Jonathan work harmoniously together, and the song itself can even succeed on operatic-pop radio, because of the lyrical nature of the track and how generalised and broad it is. And that is saying it in any good sense of the word. ‘Sing Again’ and the lyrics that draw in people who may not know God, is a good, good thing- for if people wrote songs that people outside of the church can relate to, all the while still holding firm and true to the core beliefs, then maybe, songs can have a more uniting effect than they currently have. A song that was a highlight on Worship Forever, it’s also a powerful highlight on this single release, and a song that will continue to impact people in the upcoming weeks to come. Well done Michael and Jonathan for ‘Sing Again’. Looking forward to whatever the Lord has in store for Michael in the upcoming years ahead.