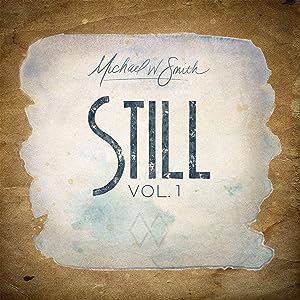 Michael W. Smith needs no introduction. Actually, he does need an introduction. My blog about him that I wrote in February 2019, linked here. And so now that we’re all across all things Michael and his music…he is definitely a legend, a living one at that. Michael, Amy Grant and Steven Curtis Chapaman, have all three impacted and influenced CCM from the 1980s till now, and all three in their own way, shape and form, are still active in the music industry, even now. So it is comforting to know that in such an unpredictable and unnerving time of 2020 with COVID-19, Michael W. Smith has since unveiled to us another collection of songs, titled in this 10 track bundle, Still, Vol. 1. Upon first glance through the track-list, and without even listening to the songs, you’d think it’s another installment to the Freedom and Glory, so it can’t be that bad, right? Well, let’s just say that this album isn’t what you’d expect. Whether this statement can be appropriated in a good or bad way is entirely up to the listener. Nevertheless what I’m about to say is no ill will to Michael or his music prior to Still, Vol. 1. But what I have to say is this: this album isn’t great at all. In fact, I’d have to say that this album is quite possibly the worst he has ever done.

Let me explain though. The instrumental songs are ok. Not good, good, but ok. They’re free flowing, just Michael’s piano, and therefore, perfect to listen to when you’re worshipping whilst lying down, falling asleep to a music album like this. But let’s be real for a second. This is not really a music album. Yes, there’s music in the background, but the album as a whole lacks a little bit of structure. Instruments come and go like the toss of the wind. From tracks 1 – 5, Michael speaks scripture (speaks, not sings) over the instrumental bits, and while all of what he’s saying in these ‘songs’ are indeed true, I’ve felt at times getting very sleepy and tired listening to this. My concentration level dropped right of when I started to hear these 10 tracks. No way were these ‘songs’ like anything from Freedom or Glory– both these albums had structure, even though both these albums were instrumental. I guess maybe that was not the point for this album at all. Maybe this album was created with just the right thing in mind- tools to allow listeners to be in a contemplative state of being, even if it means for people to feel tired and to be on the brink of falling asleep. For when people feel as though they need to sleep, maybe they listen to lyrics (or in this case, poetic stanzas) more or less? Regardless, this album is 10/10 for effort, and for Michael creating something new and different than what we have seen from him before.

But with all of the good intentions this album has, my concentration level didn’t make it quite literally past track #3. When you do get to that point, you realise that all these songs (if you can call them songs) blend together. Michael’s ok at reading out scripture, but often, I feel like the talking discounts and distracts from the music that is being used as the backdrop. For me, I felt much more at ease hearing these instrumental tracks, because even though I appreciate the sentiment of Michael’s spoken word of bible verses across these first five tracks, I feel like the words against the music doesn’t sound as cohesive as much as it maybe could’ve been had it been for different music, or even different bible verses spoken. Whatever it was, the execution wasn’t really right- it’s not really an album because it’s just spoken Bible verses over music that doesn’t seem to have much of a structure, and maybe, just maybe, I was expecting a lot more from Michael in this album, considering his last full-length studio album was in the beginning of 2018 with A Million Lights.

Someone may like this album. But it wasn’t me. Yes, I thoroughly enjoyed Freedom and Glory, as well as a lot of his albums before. But alas, this 2020 Still, Vol. 1 project hasn’t been one of them. I almost feel sad or even upset that this review is very negative, but…can’t do anything about that though, right? Michael’s intentions are fair and pure- create an album full of ambience, and create a space and place for prayer, reflection, soaking and the like, to take place…but will I actually put this album on if I want to worship while I rest? Probably not. Maybe I’ll listen to Phil Wickham’s acoustic Singalong series albums, if I want to worship while I relax. Maybe, just maybe, the next Michael W. Smith album is better than this…it should be, shouldn’t it? Michael’s efforts are 10/10, but the album as it stands? Well, 1.5 should do it, and it’s only 1.5 because of how good a piano player he is. So now it’s off to listen to Michael’s instrumental albums, unveiled to us in 2000 and 2011. I reckon you all should, as well. You’ll thank me later!

3 songs to listen to: nothing! I’d rather listen to albums like Glory, Freedom and Devotions first.