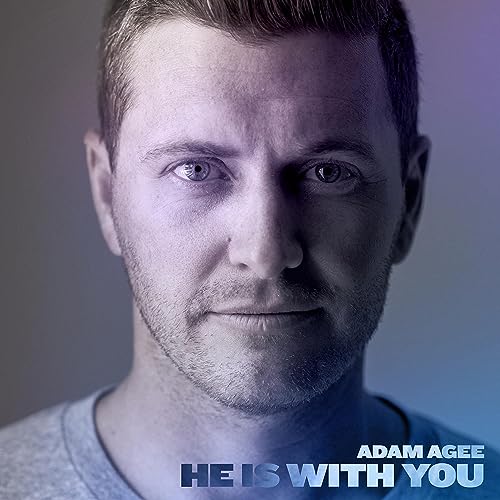 Adam Agee– He Is With You (Amazon mp3/iTunes)

One of the most underrated artists that I think has existed within the realms of CCM, is Adam Agee. Formerly from Stellar Kart and also formerly from Audio Adrenaline, I’m sure many of us might not know who Adam actually is. But for those of us who were fans of Christian pop/rock in the late 2000’s/early 2010’s; we’ve all heard his voice. Back in 2017, Adam released his debut EP Paper Planes, and this spelled the end for the rebirth of Audio Adrenaline. Jon reviewed the EP here; and I agreed with him- that the EP was solid; however, with only 4 studio songs and an acoustic version; there wasn’t any way for us to gauge how his solo career would go, and whether it would sound the same or different to Stellar Kart or Audio Adrenaline. Well… now we know. Because Adam has since unveiled a new album. An 8-song album (in between an EP and a full-length album), called He Is With You. Comprising of the 4 studio songs from 2017 (I think they’re re-mastered?) and 4 new songs; this is a long time coming from Adam; but nonetheless appreciated and welcomed with open arms by us all. Adam has that every day-man vibe, that try-er attitude about him; and from this album, it’s clear that he is on fire for Jesus. He Is With You may be too short. But it’s an album that is needed for today’s times, and does bring about encouragement, inspiration, hope and a promise of Jesus’ love.

Opening with the vibrant and energetic title track, we are presented with a stirring piano ballad, as Adam eloquently and passionately relays to us that though he himself doesn’t know what everyone in this earth is going through, Jesus does; and Adam reassures us that Jesus is with us all, and that ‘…oh child of God, rest in His love, whenever your strength is not enough, don’t ever lose hope, and don’t give up, He is with You, He is with You, whenever your faith is all but gone, you’re never alone, keep holding on, He is with You, He is with You…’. A song sure to provide comfort and reassurance, the radio friendly ballad passionately inspires us to keep holding onto the promises and the faithfulness of God. “Fighting For You” is next, and is a song sung from Jesus’ point of view. Giving us comfort and the knowledge that we are worth immensely more than we can understand or fathom in the eyes of Jesus; Adam powerfully reminds us that we need not worry about our futures and whatever situation we are going through, as ‘…you’re worth more to Me than all of heaven’s glory, call on my name, child be still and know I’m fighting for you…’. Jesus Christ fights our battles, even when we cannot; and “Fighting for You” does a stellar job in conveying the message of hope and reassurance. “Satisfied”, another piano ballad (in stark contrast to anything Adam has done in Stellar Kart and Audio Adrenaline!), has Adam showing off his vocals brilliantly, and conveying that he is satisfied in the presence of Jesus Christ and in the presence of the triune God; while one of my personal favourites on the album is the acoustic guitar led melody “Not Giving Up”. Sung from the perspective of a friend or a mate giving advice and assurance and hope to someone else who seems down on their luck; Adam encourages us, and sings about an eternal hope, that we as believers aren’t giving up on our friends, family, and acquaintances; and God Himself won’t ever, ever give up on us.

The poppiest and most dance/EDM focused melody on He Is With You is “Paper Planes”. Musically similar to Stellar Kart and Audio Adrenaline, Adam fervently speaks about the message of taking risks and stepping out into the unknown. This message is paramount, as Adam reminds us that all we need to do is to trust that Jesus has our lives under control, even if we don’t know or believe it. Like a paper plane, and how the maker guides where they want the plane to go; so too are we moulded and fashioned by our Father in respect to our ever-evolving gifts and talents, like the potter and the clay. Jesus Himself knows where we are best suited to be serving in, while we’re here in this earth; and all we need to do is trust Him and His guiding of our steps. “Chasing”, the shortest song at 2:35, is a melody more suited to Stellar Kart, and lyrically is similar to Switchfoot’s “Selling the News”. Kind of a spoken word political/economic/disparity statement, Adam reminds us that we’re all chasing something. Whether that’s something of importance is another matter, but this song forces us to look in the mirror, asking ourselves if we’re the people we want to be. And as we chase material wealth and monetary gain, we are forced to look inwards, and reflect upon the choices that we make and whether they positively or negatively affect ourselves and the people around us.

“Going With You”, probably the poppiest song on this EP, is permeated with hope and encouragement. With Adam convincingly and ardently providing comfort that we are going wherever Jesus is going, and He is going wherever we are going, Adam relays that ‘…I won’t worry about tomorrow, cause I know that You know where I’m going, and I’m going where You’re going…’. Going to make God’s name famous and renown should be our only desire and our only vision and mission; and as we love like Jesus loved to the least of these and show Jesus to the world through our actions; this will be how we are the salt and light to the world that may not know Jesus like we do. The last song on the EP/album is “Empire of Noise”, and is as confronting to us similar as how “Time’s Not Waiting” was on Stellar Kart’s 2013 album All In. With Adam essentially calling out all the distractions that we can have in modern day life, the things that demand our attention, and the things that dull down our connection to God, Jesus and The Holy Spirit (such as social media, TV streaming services, Youtube, the cinemas, fast food, shopping centres, even a friend or girl/boyfriend!). We’ve all felt that pull away from God and onto ____. Fill in the blank. Call them idols or whatever you want. But “Empire Of Noise” is blunt and sometimes blunt is what we need. This melody is a wakeup call, and if we need to remove ourselves from something that is taking the place of Jesus, then so be it. Well done Adam for such a thought-provoking and confronting song!

What more do I need to say about Adam Agee’s He Is With You? This EP/album sounds very much like a mashup between Stellar Kart and Audio Adrenaline musically; yet Adam’s song writing is on point immensely. Even though both bands are done and aren’t coming back, it’s still nonetheless great to see Adam still making music, and good music if I might say. This project is a labour of love for Adam, and it isn’t known if he’ll keep on making solo music or venture off into something else that’s new. But whatever the case, we have these songs, and that is more than enough, I reckon. Well done Adam for such a powerful set of introspective, reflective and impacting album, I can’t wait to see and hear whatever God has in store for you in the coming months and years ahead!

3 songs to listen to: He Is With You, Not Giving Up, Empire Of Noise