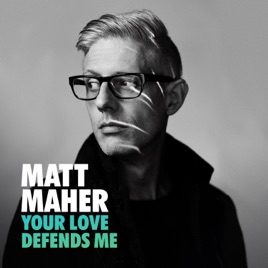 Canada. Not the U.S. But Canada. Oh how we love Canada. With music artists borne out of this splendid country, from Amanda Cook, Jon Bauer, Manafest, Tim Neufeld, The City Harmonic and Hawk Nelson, to newworldson, Thousand Foot Krutch, Love & the Outcome, Starfield and Downhere; we have been blessed over the years to be given the gift of these musicians from across the border. Now we hear another popular singer/songwriter/worship leader who has become one of the most emotive, humble, heartfelt and encouraging deliverers of music and song- Matt Maher. A committed Catholic within the CCM industry, Matt has shown us time and time again his song-writing prowess with hits from across the years of his music ministry, with songs like “Your Grace is Enough”, “All the People Say Amen”, “Lord I Need You”, “Turn Around”, “Rise Up”, “Christ is Risen” and “Hold Us Together” being some of his most loved songs throughout the years. Matt’s honest approach to worship music is what makes him quite possibly one of the most underrated worship artists this turn of the millennia. And now he is at it again, with another single this year, as a follow-up to his underrated 2015 album Saints and Sinners, which bore the singles ‘Deliverer’, ‘Abide With Me’, and ‘Because He Lives’. Releasing ‘Your Love Defends Me’ just a few days ago, this song, co-written with new artist Hannah Kerr, is quite possibly one of the most encouraging songs I’ve heard from Matt ever since ‘Turn Around’ from his 2011 album The Love In Between.

Originally recorded by Hannah on her 2016 album Overflow, ‘Your Love Defends Me’ is a song that I initially predicted way back last year, that Matt would record a version of the song, and release it as his brand new single…and I was right. “Your Love Defends Me” evokes a theme of God standing by us and fighting for us, often at times when we can’t fight ourselves, as we are reminded that our war today is not against flesh and blood but rather against principalities and evil forces and schemes of the devil. As Matt declares himself about what is the heart behind the song, ‘…this song comes out of Psalm 91, and the idea of God being not a refuge, but our only refuge. I think we can all relate to moments in our lives where who we were (or who we’ll become) comes crashing to the forefront of who we are, and all of a sudden there’s this fight happening inside for who gets control – the past or the future or the present moment now. When you combine that with a social media context that is always recording and documenting everything, it lives on in perpetuity either as an accusation or as a testimony. [So] to put it simply: Evil is in the business of accusation, but God is in the business of raising up testimony – of who he is and what he’s done. This song talks about how God is a defender. How the love of God is not just a defense, but it’s really the only defense we have that can stand against the inconsistency of ourselves. God is your defense, and what he says about you is what matters. That’s what stays…’ And with that, there’s nothing much more I can say about this song than to re-iterate what Matt has voiced in this above quote- that the song reminds us all that God’s love defends us even in the moments where we don’t even believe it, or can’t see it, or want to believe it but can’t because of the lies gripping us from every angle… Matt’s new song is a heartfelt one- we can never get enough of a reminder that God defends us, not just shown in this song but in songs gone past. A song that’ll hopefully encourage us in the upcoming days and weeks ahead, this is a must-listen track to declare we’re feeling like we’re pressed down from all angles.

Releasing on the same day as Jordan Feliz’s deluxe edition of The River, Hillsong UNITED’s latest album Wonder as well as a unique remix of Tenth Avenue North’s ‘I Have This Hope’, Matt’s latest musical offering is sure to attract listeners of his music as well as fans of other similar contemporary/worship artists like Chris Tomlin, Audrey Assad and Kristian Stanfill. While listeners could potentially be hesitant in listening to his music because of his Catholic faith, Matt continues to bridge the gap between Protestants and Catholics (alongside Audrey Assad) to always provide us heartfelt songs that can be sung by both these diverse denominations alike. Matt’s heart for the presence of God is very much evident in ‘Your Love Defends Me’, as the song, full of life, encouragement and enthusiastic motivation, is one of the songs released recently you shouldn’t miss if you love great modern worship alongside a similar musical vein to artists from Passion, Kari Jobe and Audrey Assad. Well done Matt for such a poetic, engaging and compelling melody, and one of my personal standouts in within these last few months.

1 song to listen to: Your Love Defends Me…again and again and again, as long as you want, until you get sick of the song and hold out hope for Matt to release his new album later on this year

One thought on “Matt Maher – Your Love Defends Me”