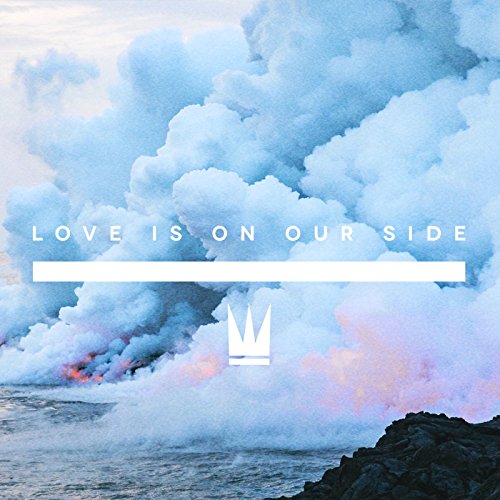 Capital Kings– Love is On Our Side (iTunes/Amazon mp3)

Capital Kings. Quite possibly one of the most ingenious and unique duos currently in Christian music- fusing together the realms of EDM and pop music, we are presented with a Gotee Records artist who has successfully released 2 albums over the last few years- their self titled debut in 2013 as well as their II album in 2015. Gaining a fan base and amassing popularity, this duo of Cole Walowac and Dylan Housewright (previously it was Jon White on vocals til he stepped down mid-way during 2016) started off as a remix DJ, offering their skill set and talents to produce remixes for Britt Nicole, Mandisa, Sanctus Real, David Crowder*Band, Group 1 Crew, and TobyMac, to name a few. It was in 2013 where they branched out from remixing to deliver their first album that led to the radio hits ‘You’ll Never Be Alone’ and ‘All the Way’, along with their promotional track, ‘I Feel So Alive’. Enter in II in 2015, that showed us more of their pop side, as they featured tracks like ‘Believer’, ‘Into Your Arms’ and ‘Fireblazin’ (two versions of that song released, one featuring worship artist Chris Tomlin), each of them heavily promoted on both K-Love and Air1. Yet, after the departure of Jon White…I figured that Capital Kings were done. Finished. Nada. Yet, the band continued, and decided to replace Jon with Dylan, and while their comeback single in 2016 ‘I Can’t Quit’ was more electronic heavy than what I was used to from the band, what I did hear of the track was a song full of enthusiasm and passion, even if the track was electronic to the nth degree. Nevertheless, we have been blessed to hear another single from Capital Kings with Dylan as the lead vocalist- and standing at 3:19, ‘Love is On Our Side’ is very much a song that is needed in a world with such a tense and disturbing political climate.

Released just a week or so ago, Cole and Dylan have in fact surprised us with this release- prior to June, I didn’t even know the band were making new music. And since it has been about a year and a half since II, it is kinda the right time to release new music, right? The end result is much of a mixed bag unfortunately…sure the song is good, and the message is great, if we want to hear yet another song about love and the importance of it being on our side in times of difficulty. Not discounting the passion of Capital Kings or even their intentionality of the track. Looking at it on face value, the song is good. It’ll slot right into the new playlists on either Air1 or K-Love and the song will feel right at home on there. Yet, if we compare this song with previous tracks in the duo’s discography, ‘Love is On Our Side’ sadly doesn’t live up to the high bar set by songs like ‘All the Way’, ‘You’ll Never Walk Alone’ or even songs like ‘Fireblazing’ or ‘Into Your Arms’.

Maybe it was the way that Jon sung and the passion that he brought with him. Or maybe it’s because Cole is practically absent in ‘Love is On Our Side’, and instead we hear a lot of Dylan and whole lot more of the layers upon layers of electronics, sometimes even much more that I can handle, both as a reviewer and a casual listener of music. Still, there’s nothing wrong with the message or the lyrics. That is ok. It’s just the over-saturation of electronics throughout the track could deter listeners away from the song (and even away from the band) rather than towards. And besides- hasn’t the theme of love and love being for us, been recorded before? And besides, if Capital Kings, especially in this track, can sound stylistically to The Afters, then you know that something is wrong!

Sadly, this review of the song is much more negative that even I anticipated it would be. There’s not really much going for the song, aside from the message. Hearing the track again and again, I’ve realised that this song is missing Cole Walowac…a lot. No rapping, no ingenious unique remix-y sounds that were present on ‘You’ll Never Be Alone’, just layers on layers of electronics and autotune. Nothing too grand or exciting. Still, the message is good, and for that and that alone, the track ought to be heard at least once. And then you don’t have to hear it anymore- it’s your choice. Just listen to the song and reserve judgement to later. Who knows, maybe you’ll enjoy it more than me. That’ll be good. Still, this duo of Capital Kings will hopefully soldier on…yet if their new music is very similar to this track, I get the feeling that my advocating of the band will be much shorter than even I can predict.

3 songs to listen to: Love is On Our Side (3 times or more…til you realise that you are not listening to Jon White, but rather the new vocalist of Capital Kings, Dylan Housewright…and he oddly sounds like Josh Havens of The Afters…right?)