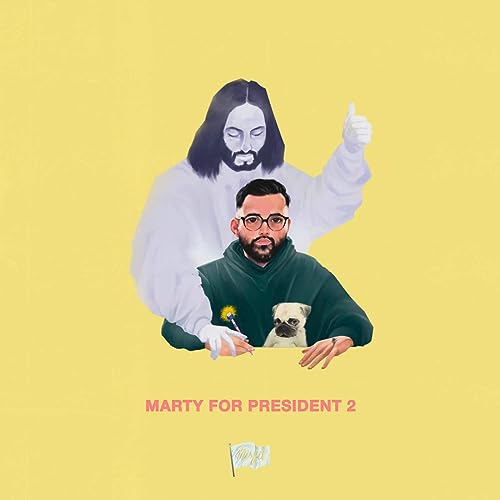 If I had to pick one artist that has had a big year over the year of 2018- a couple of years ago, in terms of their career; it’d have to be Social Club Misfits. A rap/hip-hop duo comprised of best friends Fern and Marty, these two rappers have a big heart for Jesus, and were signed to Capitol Christian Music Group around about three and a half years ago. The Misadventures Of Fern And Marty was the duo’s label debut; and released in 2017 to moderate success; yet it was only in 2018 that Into The Night propelled them to greater heights and to stardom. 2019 saw the unveiling of the two EP’s MOOD and DOOM as well as the pop single “Testify” with Crowder on guest vocals. And now 2020 has seen MARTY step out on his own and record a new solo project- his first in 5 years. No, this doesn’t mean at all that Social Club is splitting up- in fact it just means the total opposite. Marty and Fern are free to record as solo artists under Social Club Misfits’ contract with Capitol CMG- and once we all breathe a sigh of relief that these guys are still friends and there’s no falling out; well then we can appreciate Marty For President 2 all the more!

And while I myself haven’t been that much of an avid listener of any rap artist in general, Social Club Misfits have changed my outlook on this genre, along with artists like PEABOD, Lecrae, Group 1 Crew, KB and Andy Mineo. It’s hard not to love Fern and Marty’s music after hearing both give powerful testimonies (in separate videos!)- and I’m sure when you guys watch these videos too; you’ll be blessed! While we as a site unfortunately never reviewed Into The Night; Marty’s solo offering has encouraged me so greatly in my walk with Jesus- and no doubt any future SCM releases will be reviewed by this site- for sure! And now it’s time to feast our eyes on Marty’s heartfelt prayer and plea to ‘run for president’. Is this a joke? Or like a serious campaign pitch? Well I reckon I’ll leave it up to you guys to listen to, to make up your mind!

Opening up the track list is the one verse 2 minute pulsating and powerful “The One About the Misfit Pt2”- whereby Marty fervently relays to us his thoughts and emotions sort of like what NF does with his intros on his albums. As Marty eloquently reveals his depression and various feelings leading up to his solo release- this track sets the tone for the rest of the EP- this is true, emotional and authentic contemplative yet intense stuff right here. “the One Where I Talk To God” is next, and is the lead single. Featuring Andy Mineo and Tree Giants on guest vocals, the track dives deep into the need that we all have in our hearts to talk to God, to lean on him especially during times of trouble and pain- with each of the vocalists beautifully crafting a literal masterpiece that is bound to bring us comfort no matter what is going on in our lives. “The One Where I Hate You”, though a weird and intense title, is very, very real and impacting, as Marty speaks about the persona (is it him?) going through a bitter break up, and then him proclaiming that he hates his ex (which is extreme but a valid thought process and maybe resonates with so many of us because we all sometimes feel a heightened level of hate in the times where we are the most emotional or vulnerable); while “The One With The Presidential Freestyle” lyrically is pretty all over the place, and not making much sense; but musically and structurally Marty just goes for it and holds nothing back- this song needs much more lyrical dissection but it’s still one of the high points here!

Singer/songwriter “Hollyn” joins MARTY on “The One With The Emo TRL Sound” and is an acoustic guitar jam inspired by Bob Dylan’s “Girl From The North Country” as Marty and Hollyn lament about being away from their significant others and promising to stay faithful while staying apart. The penultimate melody “The One With No Discounts” is also another song with a guest vocal- as Marty enlists GAWVI and Tommy Royale, with the trio ardently relaying to us their difficult upbringing and their roots from when they were raised, as well as the morals and values instilled in them when they were young. Marty For President 2 ends with the 2 minute poppy and happy-go-lucky tune “The Last One”, which has both Marty and guest vocalist WANDE thanking God for their blessings and reminding us al that with our Father by our side, everything is going to be alright.

Marty For President 2 from MARTY is definitely something special, just as everything from Social Club Misfits was. It’s an EP that musically is quite diverse but still like traditional and old school SCM- and it’s these songs, specifically “The One With the Presidential Freestyle” and “The Last One” that will be on the ears and lips of listeners for a while yet- and it helps too that Marty isn’t forgetting his Christian faith and is letting us know that Jesus is still the centre of his life. I’m not sure what the sound will be like from Social Club Misfits’ upcoming third full length album (which they have said countless times is coming soon!), yet I am intrigued, and that is in part thanks to Marty’s latest solo effort! So, what are you waiting for? Social Club Misfits (and by extension Marty and Fern’s individual endeavours!) are going to take off in ways you could maybe never imagine, so I suggest you jump on the bandwagon right now and be amazed!

3 songs to listen to: The One Where I Talk To God, The One With the Presidential Freestyle, The Last One