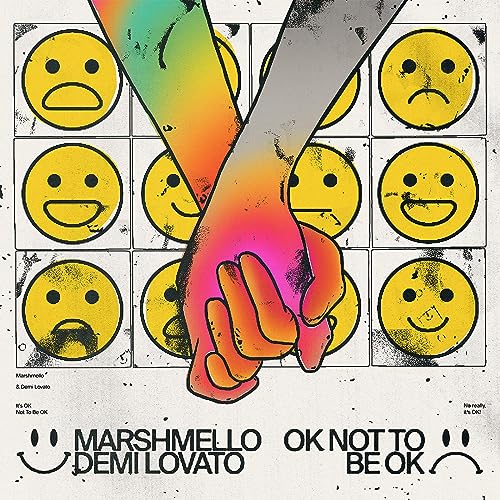 Marshmello is an enigma. A record producer and a DJ and an overall internet phenomenon, and the guy who was unveiled to be Chris Comstock (in an April 2017 Forbes article); we’re all accustomed to him having a marshmallow as a helmet/head disguise in music videos and in public appearances- probably just to create an image and a bit of mystery around him. Yet we’re all enamoured, and we’re all intrigued by him. I don’t know why though- he’s just a person with a mask like someone from The Masked Singer… yet people love their celebrity idols, no matter how weird they look! Since early 2015, Marshmello has been doing his thing (and you can all view his Wikipedia page about his discography and a summary of all of his accomplishments!), and I myself haven’t really connected with his material. Yet with his latest track “Ok To Not Be Ok” with Demi Lovato, which released last Thursday on R U OK Day, this song feels different to all of the rest in a very good way!

Demi Lovato has recently been an artist who has resonated with me lately. I’ve written a blog about her earlier this year, and have also favourably reviewed her singles “Anyone” and “I Love Me”. The trend continues with “Ok Not To Be Ok”, with the pop/electronic/dance track featuring Demi powerfully and earnestly relaying to us all encouragement and inspiration to survive and thrive each day. By recounting to us that we are indeed allowed to admit to others around us that we’re struggling whenever we are- and that we don’t have to go through life alone and that we don’t need to put on a brave face all the time; Demi and Marshmello have unveiled a track for the ages and a song that, although short at 2 minutes 40 seconds, packs a punch; with the music video filmed during quarantine and the message super relevant for today, especially since we all may be having feelings of isolation and loneliness due to COVID-19, quarantine and lockdowns of some kind. With the music video featuring both Demi and Marshmello meeting their younger selves, and reconciling the issues their younger selves have with what they know now; “Ok Not To Be Ok” is a much needed song that is sure to be repeated over and over and over again. Pity the song is too short, because I reckon another minute or so of headbanging danceable goodness would’ve been epic!

I met Demi, I think four years ago. I actually played a party or something for her a while back and before I went on, it was at a hotel in L.A., and I went upstairs and met her before… And so we’ve known each other since then.

So this collaboration has kind of been just in the works, I would say, since we met about four years ago… She did the song and then I got it and it was just kind of piano and that’s about it. And so then I was like, ‘How can I create an instrumental that compliments the emotion of the song?’

In the beginning it’s very slow and stuff, so I made the instrumental very slow. And then during the hook, which is the resolve of the song, I kind of picked it up with the energy and it’s kind of like a little dance tune.

I think that was a huge driving force in making the song, as well, as there was only one way the song could be. And so I spent a long time trying to find that exact moment where I was like, “Oh, okay, this is exactly how the song should sound. This is how it makes me feel.” So it was just kind of like emotion turned to music in a way.

I think a lot of people with negative feelings and negative thoughts that are affecting them are kind of scared to bring it up, scared to talk about it. In reality, they’re scared because maybe the (other) person won’t relate or the person won’t understand, when in reality most of the time the person that you could bring it up to, has most likely felt like this or will understand or can relate as well. I think it’s very important to talk about it.

Will we ever understand why Marshmello wears a giant mask on his head? Maybe, maybe not. But what matters is that this song rocks, and that this song gives us all of the heartfelt emotions, and this song makes me excited for Demi Lovato’s upcoming new album! And… that’s all I reckon! Seriously, listen to this song, even if you are feeling ok, and are mentally, emotionally and spiritually in a great place. Because this song will cement those feelings, and make us realise more how much the importance of friends and family really is. If nothing else, then that’s a good reason why the song was recorded. So well done Marshmello and Demi; I can’t wait to hear what you have next in store (separately and maybe another collab in the future!)