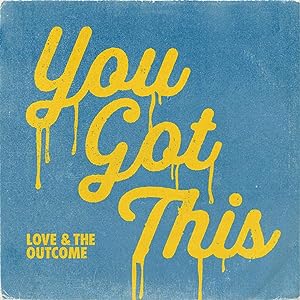 Love & the Outcome – You Got This (Single) (Amazon mp3/iTunes)

Hailing from Canada just like other international acts like Hawk Nelson, downhere, Amanda Cook, Matt Maher, Starfield, Manafest, and Relient K; Love & The Outcome have continued to deliver powerful melodies and confronting pop tunes, to make the duo, consisting of Jodi King and husband Chris Rademaker, one of CCM’s most sought-after duos (aside for FOR KING AND COUNTRY) in recent memory. Since signing to Word Records in 2012 (home to many other artists like Zealand Worship, We are Messengers, Group 1 Crew, Big Daddy Weave, Chris August, Francesca Battistelli and Meredith Andrews to name a few) and delivering arguably one of 2013’s most played and recognisable songs on Christian radio, ‘He is With Us’, the husband-wife duo went on to compose and collate together their debut album that they unveiled in 2013, and to date, an album that I reckon is one of my favourite debut albums by any CCM artist in the last 10 years or so (alongside Francesca Battistelli’s My Paper Heart, Sidewalk Prophet’s These Simple Truths and for KING AND COUNTRY’s Crave). Since then we saw a follow-up in These are the Days in 2016, where the duo brought with them a lot of influence from the 1980s to create a pop/quasi-worship album that could’ve easily fit right into the 1980s era if it wanted to, and no one would be none the wiser (a compliment, that the band bring us a lot of nostalgia of the 1980s to create a sound that is distinct and unique). The duo continues to weave together Jodi’s melodically pop sound with the prominence of Chris’s bass guitar, as These Are the Days brings with it a strong message of hope and looking forward with standout songs ‘The God I Know’, ‘Gates’ (of which they released an acoustic performance featuring label-mate Francesca Battistelli), the title track and their most recent single from the album, ‘If I Don’t Have You’. Fast forward to the middle of 2019, and we see another development in the duo’s new venture into yet another possible album. Released last week, both Jodi and Chris deliver to us ‘You Got This’, their first song (and potential first single from their yet-to-be-untitled album, maybe coming out at the end of the year!

‘You Got This’ stands at 3:14; and at first glance, the music and lyrics scream ‘radio single’ through and through. And yes, this song is a radio single. A song that I’m sure will take on where ‘The God I Know’ left off, and be a hit at radio stations all around the world in the upcoming months. A song that, at first glance, isn’t that impressive, considering there’s been around three years since studio albums for the duo. A song that sadly suffers from a lot of repetition in the chorus, and a lot of looping percussion. But, is this song stil catchy? Most definitely. The song still have charm that this duo normally places into every song they create? Of course. The song itself has a well rounded message that God has everything under control, or as the song suggests, that ‘you got this’, a phrase that can get overused in everyday life quite a lot but never really dwelt upon as to what those three words mean when strung together to create a phrase. The song therefore implies God’s sovereign control and will over our lives and situations- and thus, ought to give us the freedom to live life fully and not worry about things and circumstances that we believe God to fix, just like how a genie grants wishes. But rather, this song shouldn’t evoke feelings of ‘why shouldn’t God give me this’ or ‘why didn’t God come through on that’. But rather, Love & The Outcome’s song is one of content and fulfilment, of knowing and trusting the bigger picture even in the midst of the storm as well. A song that allows us to sing out, that ‘…I don’t know the way, but You got this, gimme the faith, that You got this, even today, You got this, I know that I know, God I know that You got this…’; what the song lacks in lyrical underwhelmness is made up for with infectious joy that Jodi has in her vocals that can and should be a valid reason as to listen to the song, at least once, even if it is to say that this song is not for you!

Love & The Outcome have given us a taste into what we can expect for album #3, and though it can seem as though it’s more of the same, what this duo has is a personality that is joyous and fun, and sometimes, it can seem like, sad to say, that much of Christian music feels like a lot less passion and enthusiasm compared to mainstream counterparts. This is where this duo comes in- catchy, fun-filled, passionate and joyful; maybe I’m biased, but I’ll listen to anything these guys release, even if it is this song, which, on the whole, isn’t necessarily a great ‘first single’, compared to ‘He is With Us’ or ‘The God I Know’. Nevertheless, Jodi and Chris still present us with a song that can be a catalyst for change, and as we venture into the June-July months, where people go away on trips; this song can perfectly slide into one of the upcoming month’s song playlist, as this song is certain to go far commercially as the weeks and months progress. Well done Jodie and Chris for such a song that will bring the message of trust, as people hear this song, be it for once or many times!