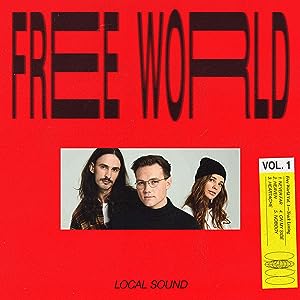 ‘…”Local Sound” is a movement born from within the Nashville-based college ministry, MyLocal. We know our identity is found in the hope of Jesus Christ and as key holders to the kingdom of heaven, we do whatever it takes to bring people to Jesus by glorifying God with all that we have. Simply put, we are culture creators. The “Local” within Local Sound speaks to the roots of who we are and why we do what we do. We fully back God’s dream of “The Local Church” and we believe that God, the original culture creator, has designed the local church as plan “A”—to immerse the world in His culture. We were never intended to be the products of temporary culture. We were made to be distributors of an eternal one. Our “Sound” is a reflection of our heart, and our passion to unite the word of God with high energy, innovative music that reaches the world. We believe we have been called to spread the gospel through relevant and inspiring message-driven songs that express the joy found in a life fully devoted to Christ and the realization of the deep love that the Shepherd has for us…’ Recently signed to Integrity Music, home of artists like Lincoln Brewster, Alisa Turner, Ben and Noelle Kilgore, Jon Egan, David Leonard, Michael Farren, Paul Baloche, Worship Central and Tim Hughes, to name a few; Local Sound, founded by Jared Runion, and consisting of other members Garrett Tyler and Emily Wyant, grew out from their local Nashville college and their young adult ministry of MyLocal615.

Now years later and an EP as well as an acoustic set of songs underneath their belt, this three-piece have unveiled yet another five songs in The Free World Vol. 1, this time under Integrity Music, arguably the label to be under if you are creating something worshipful. Delivering to us vibes and musical sounds similar to that of Hillsong Y&F, newcomers The Young Escape and more seasoned artists like For All Seasons and I AM THEY; Local Sound and their message has never been timelier as it is for now. As referenced in the quote above, the band firmly is grounded in its identity as a local band first, as we’re reminded that anything to be great has to be derived from their foundations in the local space, they are in. Fusing together the realms of worship, pop, CCM and EDM together to create a musical sound that is very much edgy and something different than many of the other artists on Integrity Music; this is a must-listen if you want refreshing music a la Hillsong Y&F, as we’re reminded that for an artist to be something special, they ought to tug us at the ground level, never losing their musical themes and style as they travel on the road of stardom and record label signings. Local Sound, if they continue along the journey they are on musically, can hopefully be one such artist that utilises their local influence in a grander scale, giving us impetus that if you want to affect globally, you have to start locally!

With Local Sound recently touring with Mack Brock (previously of Elevation Worship), Cody Carnes (husband of acclaimed worship leader and singer-songwriter Kari Jobe, and a worship artist himself) and Mosiac MSC throughout the last few months, we are blessed with the unveiling of 5 songs on this EP, enough for us to enjoy what this new-ish band has to offer (need I remind that this offering is the band’s second EP, but their first to be distributed on Integrity Music?). ‘Nobody’ is a catchy CCM radio friendly song released as a single in September 2018, and while the song itself and the message is one that is ever needed, that nobody can love us like Jesus; I feel as though I’ve heard such a song like this before…and wait, I have- with Chris Tomlin’s ‘Nobody Love’s Me Like You’ presenting to us a similar theme. Not to discount and dismiss Local Sound’s passion in ‘Nobody’, but sometimes, a song has to wow me in order to have replay value, and sadly, ‘Nobody’ doesn’t. While the message of the song can’t come at a better time in society, there seems to be a lack of creativity in ‘Nobody’, both musically (reminding me of Y&F or even Capital Kings at some points) and thematically- which is a shame, because the rest of the EP is decent, from a band that is still on the up-and-coming. Nevertheless, ‘Nobody’ and its message can resonate with people, and I’m sure it has for someone who has heard it…it’s just not me at the moment. Nevertheless, kudos to the band for creating a song that resonates with people, and is a must-listen if you enjoy other similar artists like Hillsong Y&F, the young escape and Mosiac MSC!

Throughout the rest of the EP, Local Sound delve into the world of worship, pop and EDM as this EP fits quite well in someone’s playlist if they enjoy similar sounding artists, namely Hillsong Y&F and The Young Escape. ‘Never Far’, the first song on the EP, falls in the realm of repetitious chorus, yet the overall underlying electronic hook, alongside the passionate vocals presented by Emily Wyant; is enough for anyone to listen to the song, at least once. The song itself shows us that God is never too far from help and assistance, that His love is close to us and can comfort even the most emotional and fragile of hearts. The dance and pop vibes are enough to bring people in to listening, but hopefully, it is the lyrics that tug at the heart and encourage people to stay listening as well. ‘Heaven’ brings together atmospheric and ethereal music undertones together with light acoustics, to present a song that Mosaic MSC or even The Young Escape could undertake with great precision- Local Sound undergo this acoustic-meets-EDM genre quite well, as the song itself indicates that we find heaven once we’re in the presence of God, that heaven, as well as it being a destination of where we want to end up, is also considered to be a concept that we want to impart here on earth as well. That heaven comes down to earth wherever we go, because we carry the presence of the Lord with us! ‘Heartache’ and ‘On My Side’ are the two remaining tracks on the EP, and two of my favourites. ‘Heartache’ is presented in such a way that it could’ve easily been written and released by UNITED- which gives great praise and testament to Local Sound and their writing calibre, as the song itself encourages us to look beyond our heartaches, to declare what is true even if we don’t believe it, especially when we don’t believe. It is when everything is taken away, a la a Job situation, that we can declare these lyrics ‘…I have everything when I have you…’ with much more fervency and honesty than maybe even initially. The EP is then rounded out with ‘On My Side’- Emily leads this song with such poignancy and at times, urgency, as this melody maybe becomes a radio single in the future. The song itself- a worship song stating that ‘…You are my shield, my constant protection, there is no battle I fight alone, no matter what may come, I know I’m never on my own, Your promise is sure, You will never let me go…’ Co-written with Corey Voss, worship leader and fellow Integrity Music signee; ‘On My Side’, on which Emily channels other artists like Kari Jobe and Kristene DiMarco; is the song to listen to on the EP, if ever I was to pick one!

So there you have it- Local Sound’s debut label project, and second overall. A trio (once a quartet) that are firmly grounded in the Word of God, these songs, apart from the little disconnect I’ve felt with ‘Nobody’, are great to hear if you want a fresh worship sound, something a little different compared to the other worship songs we hear on Sundays on a regular basis. With this collection of songs hopefully being one of many (Vol. 1 does indicate Vol. 2, right?); this is a must-have if you enjoy other artists’ work like Hillsong Y&F, Mosiac MSC or more recent bands For All Seasons and The Young Escape. Well done to this newest Integrity Music group, can’t wait for whatever the Lord has in store both now and in the future!

3 songs to listen to: On My Side, Nobody, Heartache