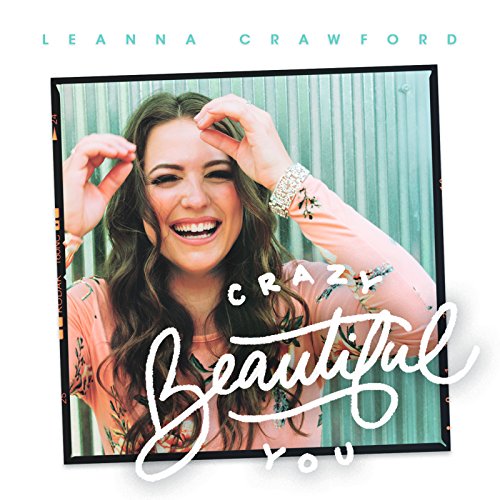 Since releasing her debut 3 song EP way back in September last year, indie singer-songwriter/pop CCM artist Leanna Crawford has become one of my favourite indie artists of late. Introduced to me purely through a tweet by a favourite artist of mine, Matthew West, this new and up-and-coming musician has delivered songs with heart and hope in her 3 song collection Crazy Beautiful You, and now releasing a new and updated EP featuring 6 songs (unveiled on January 19th 2018, and titled Crazy Beautiful You Deluxe), Leanna has delivered yet again a collection of tracks certain to be enjoyed and loved by anyone who loves CCM, Matthew West (most, if not all of Leanna’s music has been co-written with Matthew West), or just Christian music in general. And if you haven’t really heard of Leanna and her music, don’t worry…because apart from her facebook, twitter, and a couple of quotes here and there on her bio page on her facebook, there’s virtually no information about her at all. Yes, that’s correct. No information! Recently on the All In Tour with Matthew West and Jordan Feliz (of ‘The River’ fame) late last year, I have had virtually no understanding of Leanna aside from these six songs I’ve heard from her debut EP (three of which released in September 2017). So therefore, it made my initial review as well as this one much more difficult compared to other reviews of other music by artists much more well known…and maybe that’s ok!

Usually for any new artist, I write a little bit about their background and litter it with quotes directly from them if I don’t really have much to say…because who doesn’t love to read quotes from the actual artists about how they came to Christ? But not anymore. No hiding behind quotes or hiding behind just re-gurgitation of information if I have no clue about what I’m doing. Because frankly, I hardly know Leanna if at all, I can only go by what I know. No. 1- her 3 songs off her EP released in September (and I’m sure some of her additional songs on her 6 song deluxe EP released last Friday) were written with Matthew West- yes, the same Matthew who wrote ‘The Motions’, ‘Save a Place For Me’, ‘More’, ‘My Own Little World’, ‘Do Something’, ‘Hello My Name Is’, ‘Grace Wins’, ‘Mended’ and more recently ‘Broken Things’. So for Leanna to have her music, even if it is some songs (or all of them) co-written with a CCM legend, and to have her (on selected dates) for the All In Tour is a feat in and of itself. And so when I heard these songs (firstly ‘Crazy Beautiful You’, ‘Stars’ and ‘Fragile Heart’, and later on ‘Work in Progress’, ‘Prince Charming’ and ‘Write About It’) all of which are different sonically and musically, we have a glimpse into this new artist that we know nothing about…until now!

In this 6 song EP, it has been the songs that have previously been released in September last year that anchor the 6 song collection both musically and lyrically (not to say that the other songs released just this past Friday aren’t great, it’s just that the songs released last year resonated more with me!). ‘Crazy Beautiful You’ is a pop radio friendly track that speaks about how wonderful, marvellous and beautiful we are as humans created by the King, while ‘Stars’ is a moment of realisation that the stars at night are shining and reflecting the glory of God, and ‘Fragile Heart’ is full of keyboard as Leanna invites us all to realise that there are moments of life where our heart is fragile, and that during the healing process, we ought not to scoot over the painful truth that often our hearts need to become fragile in order for us to rely solely on Christ to fix what is inherently wrong with us! All these three songs that I’ve just mentioned have a trademark Matthew West spark all over them, and all of which could’ve been covered by him and placed on his new album All In and it still would’ve fit! That is the power of Matthew and his ability to co-write with Leanna. And that also speaks to the potential and promise of Leanna herself.

And so, what about the remaining three tracks? How to they compare to the 3 songs that were released last year? ‘Prince Charming’, written by Leanna when she was fifteen, has been always close to her own heart, and thus, with Matthew West having a hand in creating the final version of the song which can be heard on the deluxe version of Crazy Beautiful You, we are blessed with a song that’s message is key in such a generation like this. We as believers and followers of Christ ought to actively pray for our future spouses, for their own walk with the Lord, as we trust that God Himself has that special someone out there for us, and ‘Prince Charming’ is such a song to remind us all to be proactive in our own search for a spouse (that’s if we want one). In the words of Leanna herself, ‘…my parents have prayed for my future husband since I was born and told me to do the same. Choosing the person you marry (if God wants you to be married) is one of the most important decisions of your life. This song is really a prayer for my future husband. I hope you like it…’ The EP also invites us into an electronic looping percussion/acoustic-esque ‘Write About It’, a song that in effect is a love song to God, relaying that it is out of our love and adoration for Him that we write about it, either physically or metaphorically with our lives and how we live them sold out for Jesus; while ‘Work in Progress’, a potential official radio single #2, has the radio marketability ‘sheen’ that places the message of being a work in progress ‘front-and-centre’- how we as humans are always on the quest to learn and grow, to be motivated and encouraged to continue understanding ourselves, our maker and our fellow man, that we have never ‘arrived’, rather, we all have work to do, to learn about ourselves, God, what it means to be served and to serve, as well as everything else that this life has to offer that we aren’t necessarily that 100% on (which I’m sure is a lot!). ‘Work in Progress’ is in fact one of my favourite songs on the EP; and is a timely reminder for us to be humble in our own life experience, and to always seek wisdom out from people who have been in our situations long before. That we don’t know everything, and that’s ok!

‘…writing songs at a very young age, the 1995 born singer has penned nearly forty songs, one landing her the Praise 106.5 Music Search 2013 winner, with her song, “Moment by Moment” produced by Dove Award winning producer, Ed Cash. Since then, Leanna has opened for Jars of Clay, Audio Adrenaline, sang the National Anthem for a sold out crowd at a Pentatonix concert, sang on National TV, and won the Christian Music Summit Vocal Artistry Award put on by Tim Carson of Vocal Artistry… Currently, she attends Northwest University in Kirkland, Washington, majoring in Music Business and Vocal Performance. Her passion is to live out what she believes God has called her to do; singing, performing and writing songs to bring glory to Him…’ Aside from this aforementioned information I found on her facebook bio page, there’s virtually no other information on Leanna and her music…that is till now of course. I reckon this new EP from Leanna will be sure to catch on to whomever hears it, listeners and critics alike. Leanna is very enthusiastic and passionate, heartfelt and emotive, and dare I say, maybe even a little ‘mainstream’ in her approach to these songs…and that’s ok. Hearing her and her music, I am reminded of various ‘mainstream’ contemporaries, like Tori Kelly and Rachel Platten, even her song ‘Fragile Heart’ has some Norah Jones vibes to it. So I guess maybe, just maybe, this new EP will cross the sacred-secular divide and bridge the gap a little? Maybe. Nevertheless, I’m sure it was (and is!) a huge honour for Leanna to co-write with Matthew. These songs are a result. Congrats to Leanna on a set of songs that’s sure to be on my repeat iTunes playlist for months to come! Loving this collection of 6 songs (three of which have been in current rotation on my iTunes playlist for a while!). Can’t wait for the full length album later on (maybe this year??)!

3 songs to listen to: Work in Progress, Crazy Beautiful You, Write About It